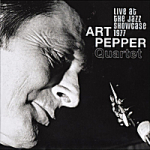 This 1977 Chicago Art Pepper performance was bootlegged in Spain. As it was stolen to begin with, the saxophonist's widow, Laurie Pepper re-purloined it, releasing it on her independent Widow's Taste label. That is the beauty of today's technology. Historically, this show came in the middle of Pepper's East Coast Tour capping the saxophonist's comeback before his artistic Gotterdammerung that ended with his death from a cerebral hemorrhage in 1982. This particular tour ended with Pepper's famous stretch at New York City's Village Vanguard with George Cables, Elvin Jones, and George Mraz, captured in its entirety on The Complete Village Vanguard Sessions (Contemporary, 1995).

That said, Pepper was returning to full-time music making after scuffling around the previous number of years. He opens this Chicago show with his original composition "Pepper Pot" from his salad days in the 1950s. It is a swing piece, bearing a glancing nod to Pepper's Central Avenue experiences and his stint in the Kenton Band. He begins the piece on alto summoning little of his dry martini tone of the song's period. Pepper is already effecting the transition to his later, more incendiary, more emotive tone that characterized his late period recordings. Constructed over the "I've Got Rhythm" changes, "Pepper Pot" provides and expanse in which the whole band participates. Pepper and pianist Willie Pickens take long solo breaks. After Pickens' extended solo, Pepper returns on clarinet, further focusing the composition's swing roots. Pepper was clearly in ascent at Chicago's Jazz Showcase.