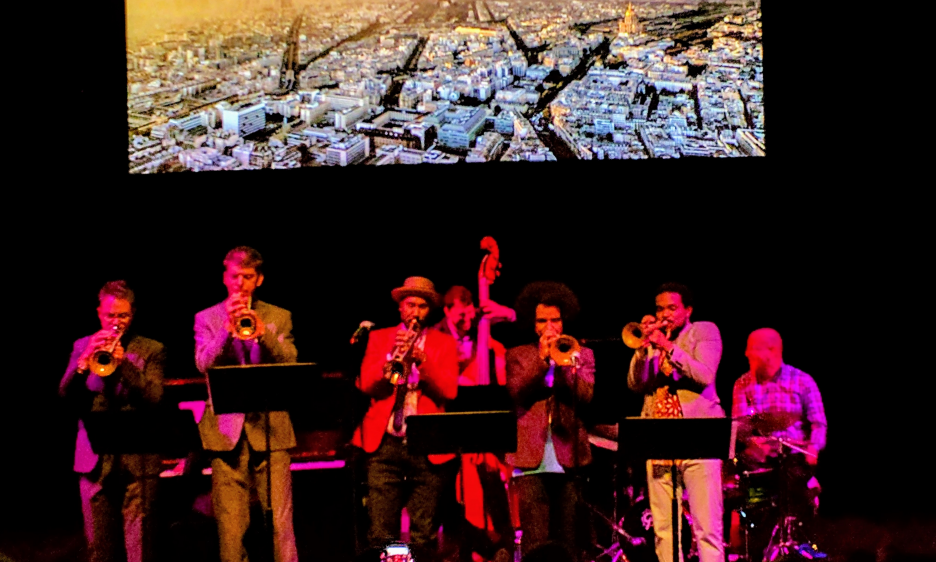 There's something about the trumpet: brash, brassy, loud, and always a powerful lead voice in any ensemble. If one trumpet is all of those things, imagine what five would sound like. For the Jazz Room's second Trumpet Summit six trumpeters were scheduled, but five turned out to be the perfect number. Ariel Mejia (who would have been the youngest of the group) had to cancel, but Ashlin Parker, Matt Postle, Mark Rapp, Eleazar Shafer and Al Strong began the show unaccompanied with a striking chorale/fanfare. Then they launched into a rousing version of trumpeter Miles Davis' "Milestones," accompanied by the rhythm section of drummer Geoff Clapp, double bassist Aaron gross and pianist Jonathan Lovett. It was definitely not an uninhibited blowing session: each trumpeter soloed for one chorus, followed by a sequence of trading eights.

An entire concert with five trumpets could be daunting, even with this kind of restraint. So for most of the remaining program the trumpets broke down into subgroups. Trumpeter Nicholas Payton's "Three Trumpets" featured Postle, Rapp and Strong (who said he had transcribed the piece in college, never thinking he would be performing it on stage). The performance was marked by elegant phrasing, and a section trading fours after the series of solos. Parker and Shafer played trumpeter Clark Terry's rearrangement of the standard "Over The Rainbow," which somehow recasts it with a Latin groove. The piece concluded with the trumpets unaccompanied, trading off phrases.

Rapp and Strong returned for trumpeter Freddie Hubbard's lyrical waltz "Up Jumped Spring." Both of them switched to flugelhorn, and ended the tune trading eights with the drums. Rapp introduced the ballad "My Ideal" by saying it was about Parker's "Lotus" trumpet. Clearly he was very taken with that horn! It was only the first reference he made to it. Trumpeter Clifford Brown is acknowledged as a master, despite dying very young. His "Sandu" featured Parker, Shafer and Strong. The solos included a Strong/Gross trumpet/double bass duet. After a round of trumpet solos Gross played a soulful solo. The set concluded with a dedication to recently departed trumpeter Roy Hargrove, a funky version of his "Soulful" (with a double bass introduction, and all five trumpets).

The encore was a New Orleans second line shout, with lots of spontaneous conversational trumpet on the head. The trumpet solos included a quote from saxophonist Eddie Harris' "Freedom Jazz Dance" (also associated with Miles Davis), and Strong played a duet with the drums. The big conclusion found the trumpeters parading into the audience. An energetic ending to a fun concert. Despite the slightly larger venue (just down the block from the usual location) the jazz club atmosphere was established. The projected images over the stage featured all of the famous trumpeters who were referenced, as well as a cartoon of Charlie Brown playing the trumpet while wearing a straw boater hat. And the trumpeters had no trouble filling the larger than usual acoustic space (it must be noted that there were no mutes in evidence, either): in fact it may have been an advantage.