By C. MICHAEL BAILEY
June 24, 2016
Sign in to view read count
Music and the Christian Tradition are as intimately involved as making love. Since the beginning of an organized Christendom, music has been a part of the liturgy and celebration of what was to become the "Good News." Regardless of one's spiritual inclinations, this religious music looms large on the cultural horizon and cannot be ignored. While so-called "classical" music has provided many religious musical expressions, there have also been several notable jazz contributions to the form not the least of which were composed by Duke Ellington and his keeper-of-the-flame, Wynton Marsalis. 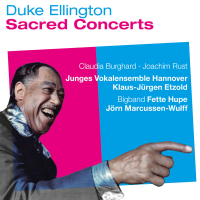 Toward his twilight, Duke Ellington composed and performed three sacred concerts in 1965 -A Concert of Sacred Music; 1968 -Second Sacred Concert, 1973 -Third Sacred Concert. These were personal statements by Ellington, bearing his indelible stamp of grace and charity. There have been precious few, if any at all, performance of these pieces by other bands. Presently is the German concerns Fette Hupe & Junges Vokalensemble Hannover, under the directions of Klaus-Jürgen Etzold and Jörn Marcussen- Wulff, respectively, blow the dust off of several selections from the concerts, giving them a hard buffing to a high shine. Ellington's spacious orchestration is will captured and represented. Solo vocalists, Claudia Burghard and Joachim Rust bring a renewed energy to the pieces, updating them admirably to the 21st Century. This recording includes selections from the first two Sacred Concerts, including Ellington's touchtone "Come Sunday." This is a full-bodied, orchestral treatment of Ellington that once heard, brings Wynton Marsalis into a sharper focus. 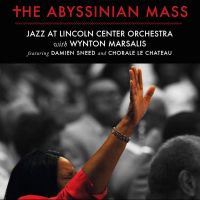 A past criticism I had of Wynton Marsalis was the silly thought that he, Marsalis, because of some blind dedication to jazz history and its giants, did not allow the music of to breathe when he arranged and performed. Well, after listening to the previous Duke Ellington Sacred Concerts and then listening to the present An Abyssinian Mass, I have decided that I had not listened broadly enough. To my ears, Ellington was the splash of water that opened up the Marsalis scotch enough for me to experience his art more fully. An Abyssinian Mass is not Marsalis' first foray into extended sacred jazz composition. The trumpeter released In This House, On This Morning (Columbia) in 1994, whose broad palette morphed into the bigger and tacitly related Blood on the Fields (Columbia, 1995) for which Marsalis won the 1997 Pulitzer Prize for composition. While this is not a Roman Catholic Mass, per se, Marsalis has deftly blended traditions in an ecumenical fashion that should shame organized religion with its inclusion. This is white-hot, bright music that leaps sonically and pleases intellectually and spiritually.