A cancer survivor who has worked in the periphery of the music-movie industry, vocalist Laura Perlman finally steps up and sets her spear in the sand with the suave and smoothly considered Previous Moments. An alto with a sure tempos feel and excellent taste in side musicians, Perlman expresses her gratitude for her good fortune with an even ten familiar standards that are taken in a straight-ahead direction, demonstrating the simple formula of jazz vocals, a great ear and propensity to swing. The presence of pianist Bill Cuniliffe and vibraphonist Mark Sherman provide Perlman a soft and subtle harmonic cushion upon which Perlman may lay her art. Perlman shows us the proper insides of that superb Van Heusen/Burke standard, "But Beautiful. Her performance shows me what alto saxophonist Art Pepper saw in the tune to make it a mainstay in his band's book. A swinging "My Favorite Things" complements a languid "You Go to My Head" and a knockout "My Foolish Heart." A grand ballads recording.

Esperanza Spaulding snuck in on us with Junjo (Ayva Musica, 2006) before fully detonating with Esperanza (Heads Up International, 2008) and Chamber (Heads Up International, 2010) and appropriately winning the 2011 Best New Artist Grammy Award (and thereby raining on legions of Justin Beiber fans' various parades). She followed that with the well-received Radio Music Society (Heads Up International, 2012). What Spalding has effectively done is add both gravity and depth to an art that was already plentiful in both. Emily's D + Evolution demonstrates Spalding's continuing anabolic evolution. Her music has grown progressively more urban with a high gleam of intelligence and artistic ingenuity. She has no interest in playing nice, loading this recording with electric guitar and angular funk, surrounding urban lyrics previously poorly articulated by any number of hip hop artist. And she is not finished yet. 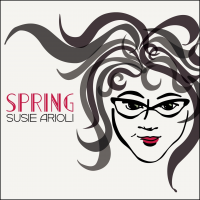 Susie Arioli's Spring is a recording very much in the same vein as Laura Perlman's Precious Moments. Arioli's standards are a bit older and her four original compositions here, fit in well with this collection overall. She too employs a vibraphonist as musical director, the inimitable Donald 'DT' Thompson. Thompson ensures Arioli a light and urbane background for her to express her sure grasp on a repertoire that includes "Mean to Me," "Trav'lin' Light," and "Me, Myself, and I." Arioli covers Bo Diddley's "Dearest Darling," giving that Diddley beat a jazz workout, all church and funk. Arioli's own "Can't Say No" celebrates the country music topic of too many adult libations and .."the devil in that goddamn Tanqurey..." Hear "Those Lonely, Lonely Nights" the same way. It is this exact blending of country and jazz that Norah Jones did her best to perfect. Thompson's direction of up to nine musicians is refined, carefully selected for each of the dozen songs making up Spring. The song to hear is "After You're Gone." Arioli pulls this from her depths...and still has a sense of humor. This is in the running for an end-of- the-year list. Superb!

Róisín O
The Secret Life of Blue
3u Records
2012

the Irish singer Róisín O's The Secret Life of Blue has not one thing to do with jazz or the other singers represented her. Considered by the Sunday Times as "evoking the likes of Joni Mitchell, Joanna Newsom and Kate Bush," Roisin (pronounced /ˈroʊʃiːn/, ROH-sheen) is a thoroughly contemporary musician in the same polyglot, international way Serge Gainsbourg was. Her music is carefully crafted and produced adult contemporary fare, better than the majority of the same made in the United States. But is that enough to vault it into any type of popularity. Plush and beautifully orchestrated and realized, The Secret Life of Blue is almost too much of what it is: well-meaning, superbly sung original popular music. I found this recording hard to get a handle on. That does not mean I thought it was bad. Quite to the contrary, the artist is from a famous band of O'Reillys hailing from Dublin. She is the daughter of the singer Mary Black and sister of Danny O'Reilly, the front man of the popular band the Coronas, so her bona fides are well intact. As a debut recording, The Secret Life of Blue provides the singer a fixed starting place from where she may make her way. I expect that a little direction will take Róisín O a long way.