Jazz on the Bosphorus: Troubled Waters 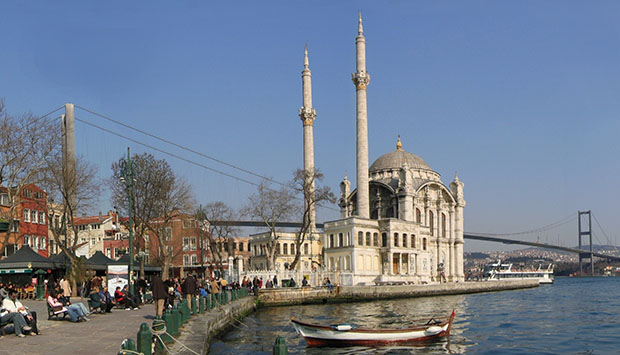 By FRANCESCO MARTINELLI
May 25, 2012
Sign in to view read count
For seven years now the rather laboriously named Istanbul Jazz Center (confusingly the logo includes the letters "JC's," I don't know why) has been one of the major clubs of the Turkish city. Situated in the posh neighborhood of Ortakoy, in the shadow of the first Bosphorus Bridge, its schedule has featured major international jazz stars besides local talent; resolutely mainstream-oriented, it provided local audiences the chance to listen to high caliber musicians, from guitarist Mike Stern to pianist Kenny Barron, but also saxophonist Greg Osby and pianist Joachim Kuhn, with a prevalence of vocals including Mark Murphy and Flora Purim, as well as the occasional sprinkling of rock and Latin groups. It presented well-established Turkish singers with more or less tenuous connections to jazz, from Fatih Erkoç to Sertab Erener, but also gave a much welcome chance to perform to young and unknown Turkish musicians, either with their groups or accompanying visiting, soloists. In short, the function of many established, center-field jazz clubs in the world's capitals.

In the beginning it was directed by well-known Turkish pianist Kerem Gorsev, who two years later retired from the operation citing the need to concentrate on his artistic career; original plans to include a jazz radio, seminars and other activities—hence the name—were dropped to concentrate on regular club programming. The place provided also food, but with a limited choice and rather high prices; the best advice—one that I gave myself many times—was to grab some of the excellent traditional fast food nearby, like kofte or pide, and then head to the club for the second set, when the diners, often noisy and casual visitors, had left.

After Görsev's exit, the profile of the club and the program slowly deteriorated, with fewer concerts and no collaborations with the local jazz festivals, usually one of the high points of the year, and I started to feel weird vibrations through the grapevine, with musicians complaining about rough treatment, aggressive attitudes, problem with payments, etcetera. Since I travel regularly to Turkey I was consulted by a few musicians and managers, and I advised the utmost caution about all financial and logistic sides, especially when I heard that some weird ideas were being floated about advancing the money for travels and hotels and being reimbursed later—always a risky proposition.

Then, on March 22, 2012, the bubble exploded when legendary bassist Buster Williams widely posted a public declaration warning other musicians:

"To the jazz community, (from the desk of Buster Williams): High Alert!!!!!!!

I thought those days when jazz musicians gave their heart and soul to enrich cultures and yet did not get paid were over. We play all over the world and have for decades!!

But last week in Istanbul at the Jazz Center, a club run by Aytek Şermet, disrespect, dishonor and unprofessionalism prevailed. My group, which includes Patrice Rushen, Lenny White and Mark Gross, played four shows to a capacity house for each show. Our agreement was nothing unordinary. We play, they pay. The amount had been agreed to per signed contract. We showed up, we did what we do, the people enjoyed it, and the club made money. Why then, in these times, when those who claim a dedication to giving us a platform, would someone not show up, not pay us, and not leave his staff the ability to meet our agreement? This is 2012. The world is a much smaller place and I can tell everyone that we were disrespected in the most blatant way. We did not get paid!!!!

So I would suggest that if your plan is to visit Istanbul to work for Mr. Aytek Şermet at the Istanbul Jazz Center, you reconsider.

The social networks started buzzing with statements of musicians variously unhappy about the current situations at the IJC.

"I know him! He's what makes our job so difficult! He reaps the benefits and talks shit the first three days, and on the fourth he's nowhere to be found!."

Some of previous collaborators also chimed in, like Süha Kurultay:

"Buster is not the first. I was the one who hired his band in Jazz Center first time, six years ago, but those things happened all the time because of Aytek. that is why I left the business.."

Some of the usual hate-mongers tried to attach political, national, racial and religious meaning to the issue, but Mr. Washington again cut short the b-s:

"The problem at hand is getting Buster's loot to him for honest week's work. Let's not throw shit at each other. This is certainly not a political issue. This is about solidarity between musicians, artists and folks who love the music. The last thing we need now is other 'things' getting involved in this. Aytek is the problem here. Not the club, the other personnel and certainly not the country. Peace..."

Still no official comments from the club or its director, and apparently the situation kept deteriorating, until, on May 19, Hurriyet, a major Turkish newspaper, published a report by Barış Akpolat: "Big Earthquake at the Istanbul Jazz Center." According to the story, young jazz player Kıvaner Uraz, during a rehearsal reminded Aytek Şermet that he still had to receive some fee, but in answer he was physically attacked and told that only five people came to listen to him and on top of that he wanted money. Caustically, the writer suggested that, for Şermet, "[it] is now time to shut the door and go south to grow tomatoes...."

It seems such an outcome is even more likely after a very large and representative group of Turkish and Istanbul-resident jazz musicians signed a joint declaration calling for a boycott of the club, warts and all:

With the latest increase in the number of the live music venues Istanbul is returning back to its old magnificent and vibrant music scene. Just because there are no legal and written agreements between the business managers and the artists all the problems and communications are solved between the artists criteria and personal practices. In this equation, business managers and owners are taking the advantage of being an employer and acting as they want, behaving unjustly towards the musicians and artists. However, there is one important thing forgotten; no musician, no business. This system has to be established to be mutually beneficial, not neediness.

Unfortunately, jazz musicians are struggling with a business owner who is not responsible for his actions, business ethics and manner. For a long time we have been hearing complaints from both local and international jazz musicians about the business owner at Istanbul Jazz Center (JC's), Aytek Şermet. Lately Mr. Şermet has violently acted towards our beloved friend Uraz Kivaner, and we decided to get united, knowing that personal responses towards Mr. Şermet will not be sufficient enough.

Regardless of who they may be, as long as these false manners are not corrected, we will face these problems together as communion and we will refuse playing at these locations. We're hoping that our boycott will come to a conclusion by sharing these upsetting events with the local and international musicians and the listeners following us and the media itself.

We, musicians having their signatures below, are censuring Mr. Şermet and his actions, and announcing publicly that, without any changes applied to the management politics and apologies, [we are] refusing to play at the Istanbul Jazz Center.

More than sixty names follow, practically a who's who of Turkish jazz, including former club director himself, Kerem Görsev, Aziz Şenol Filiz and Birol Yayla of Yansimalar, Ferit Odman, a regular drummer at the club, Selen Gülün, one of the most original piano players, and the very in demand drummer Ediz Hafızoğlu. Others added their support later. From a non-unionized and notoriously individualistic category like jazz musicians this is an important step that demonstrates how unbearable the situation is. It is worth noting that the association supporting the protest has been in operation since 2011, in defense of the musicians' interests, and that their previous action—a protest against the policy of airlines regarding instruments as luggage—yielded substantial results.

This press release triggered further comments from disgruntled customers about the noise of diners in the club, about shows canceled without refund of tickets, and more musicians chimed in, like German singer Stefanie Boltz:

"Incredible to hear all these stories! I was fooled as well two weeks ago! Every professional detail that can go wrong went wrong—accommodation, no-[show by] announced local musicians at the sound check (which was not their mistake), no advertising, no dinner, two times cancelled shows (which they didn't want to pay), last show we ourselves didn't go onstage cause we were not paid."

After the boycott press release was shared hundreds of times on the social media and made the rounds of the Turkish press, Şermet first published a few lines basically accusing one of the protesting musicians of pocketing money that was not destined to him, and then a lengthy press release where, after listing all the achievement of the club, he tried to deal with some of the issues publicly raised. The explanations about the Buster Williams situation are not very clear, involving some more or less usual occurrences in changing lineup and dates even starting in 2006, and leave the final question unanswered: Did the group finally get the fee that was agreed upon or not?

If the club was so unhappy with the group and management, why did they keep hiring them year after year, and if the group arrived in a lineup different from what was stipulated in the contract, there are proper, legal and formal ways to deal with the situation—one-sidedly cutting the fee being not one of them. The accusation that Williams attacked the club publicly without giving the time for an explanation is also not confirmed by the dates, since the group played there in the first days of the month but the press release was published on March 22nd, almost three weeks after the fact. Finally, even if Cindy Blackman was not sitting beside the trap set, the sub was none other than the great Lenny White, so I do not think that any business was lost because of that...

The reason given for not offering a public explanation—not wanting to be involved in the political debate we mentioned—is weak, considering that a press release would not have involved anything political. And all these statements by Mr. Şermet are in Turkish only, so the Buster Williams side has not been given a chance to answer. The issue with Kivaner is explained with the fact that the concert was canceled due to the young pianist "disrespectfulness," whatever that means, but no mention of the actual incident, witnessed by other colleagues, is made. The justification—that so many excellent musicians kept coming to the club over the years and did not play for free—is also difficult to understand: of course no one says that everybody was stiffed, someone did get paid, after all.