By DAVID ARIVETT
April 9, 2016
Sign in to view read count
Leonardo DaVinci once said, "Do you know that our souls are composed of music?" Music and religion are intimately linked, and music is one of the most powerful tools to convey religious meaning. As human beings, we have been given the gift of musical language which can help transform us from our humdrum, everyday existence, into something out of the ordinary. Whether music excites or soothes us, it transports us to another place. When we play and listen to music it can lift us out of ourselves to enjoy the very language of the heavens. To quote Albert Einstein, "Human beings, vegetables, or cosmic dust—we all dance to a mysterious tune, intoned in the distance by an invisible piper." Music is not just sound vibrations or notes on paper—it is ecstatic language. In this article I want to explore jazz music and the ecstatic experience.

The word "ecstatic" comes from the Greek language and means "to step outside oneself." The word "ecstatic" is derived from the word "ecstasy" and can be defined as something outside the realm of normal experience—something incomprehensible or foreign to our ordinary understanding and experiences. An ecstatic experience is one of forgetting ourselves for the moment, of getting outside oneself in that moment. The ecstatic nature of music and the effect it has on the performers and listeners cannot be denied. It is universal, and something that all humans experience—not only in music but in many other arenas of life.There are those moments when performers and listeners are so into the music that time itself seems to be suspended, so totally absorbed are they by the musical experience that it can be emotionally overwhelming. Playing and/or listening to music can be totally energizing; it can be a spiritual experience. It appears that our brains and our very souls are hardwired to respond.

There are many musicians who, while playing jazz, have experienced what's been called,"breakthroughs" or "ecstatic" experiences. A careful study of the history of jazz reveals many moments where the music has become a very expressive and powerful vehicle which points to a spiritual dimension in life. Whether at funerals in New Orleans or in New York jazz clubs, music like pianist Duke Ellington's beautiful sacred jazz compositions and saxophonist John Coltrane's A Love Supreme (Impulse!, 1965) have been created and played for spiritual purposes. In fact, many jazz musicians and fans understand that both the music and improvisation are of a deeply spiritual nature. Trumpeter Dizzy Gillespie once shared that, ..."the church had a deep significance for me musically. I first learned there how music could transport people spiritually." Many musicians who are considered founding fathers of jazz music from New Orleans—cornetist Joseph "King" Oliver, pianist Jelly Roll Morton and trumpeter Louis Armstrong—were all brought up in church, and church music played a very important role in their musical development. The African/Negro spirituals also played a most important role in the birth of the music today called jazz.

The Reverend Alan Kershaw poignantly states, ..."jazz played with a feeling and inspiration seems to me more truly an act of worship than singing some of the religious songs I learned back in Sunday School. Life is so big and wide and deep that you just have to go beyond what's superficial, and banal, and what's phony. Faith rises above the streets, above the slime and the suffering men, to the source of goodness Himself. In this sense, jazz becomes a glorious anthem of praise." As jazz music is played and improvisation takes place, both the audience and the performers can become transported to a higher place. Entering another world of euphoric awareness and deep sensitivity, they can experience a profound sense of reverence for life and all living things; they become jazzed! In fact, it could be effectively argued that the word "jazz" and the word "ecstasy" mean virtually the very same thing.

Whatever you choose to call these experiences, they can be so energizing and joyful that you will never forget them. These ecstatic experiences are not, however, to be confused with the normal emotional responses that you have when playing or listening to music. During these special experiences time can seem to be temporarily suspended and the intensity is overwhelming. Trumpeter Wynton Marsalis has shared that in playing jazz music, "sustained intensity equals ecstasy."

There are many examples in the history of jazz that document the ecstatic nature and its effects. New Orleans old-timer Jim Robinson once shared how it used to flow on the bandstand on certain nights: "If everyone is frisky, the spirit gets to me and I can make my trombone sing!" Singer Ethel Waters testified that certain stride pianists, "stirred you into joy and wild ecstasy." Drummer Billy Higgins once said, "Music doesn't come from you, it goes through you." The audiences that have attended these concerts have been equally touched by the ecstatic, as untold millions have described being touched in an extraordinary way when listening to jazz.

Trombonist Bob Brookmeyer once claimed that no form of music is as intense emotionally as jazz music. And when it is played in a "spirited" fashion, it can stimulate feelings of exultation and affirmation. This is communication between the artist and the audience on the highest possible level. John Coltrane once said, "It seems to me that the audience, in listening, is in an act of participation. And when somebody is a moved as you are, it's just like having another member of the group."

Pianist/psychiatrist Denny Zeitlin once shared that "I think the need to communicate, the need to be a part of something greater than oneself, the need to be able perhaps to reach some eternal immutable values in the universe that we experience as often chaotic and full of change. There is, to me, an absolutely transcendent quality about getting into jazz playing, when it's happening, that is so magical and so totally non-verbal that I don't have any words to describe it. But it is so exhilarating and so ecstatic, I think, in the true meaning of that word, where you get beyond yourself, and you lose the positional boundaries of who you are and you become merged with this marvelous experience. I think players have a hunger for that. If you've tasted that, you wanna get more of it. And it has a lure, and there's the hope that every time you get into that space, that somewhere around the corner, some new aspect of yourself—of your music, of everything that, intellectually and emotionally, you've ever been involved with, with music—will somehow get a chance just to happen...and I think there's a tremendous lure for us as players."

The great religious leader of the Reformation, Martin Luther, once expressed the following profound words: "we marvel when we hear music in which one voice sings [plays] a simple melody, while three, four or five other 'voices' play and trip lustily around the voice...and adorn this simple melody wonderfully with artistic musical effects, thus reminding us of a heavenly dance, where all meet in a spirit of friendliness, caress and embrace." Yes, perhaps, a heavenly dance that's intense and playful at the same time. It's a great high that's outside the norm of the mundane.

The fact is that countless millions have, over the course of history encountered deep spiritual experiences while either playing or listening to music. Indeed, the entire musical/creative process can be considered deeply spiritual. However, one important point to keep in mind is that music isn't very effective at all ushering in an "ecstatic moment" when listened to as primarily just playing in the background. It involves total concentration and participation. Unfortunately, it seems like that our present day culture hasn't the capacity for careful, intense listening to music by itself, without conversation or distraction. Jazz music is a wonderful gift, a mysterious improvisational spiritual language that beckons one beyond normal consciousness into the present moment; it is to be enjoyed and savored. So go ahead—get "jiggy" with it, because it "Tain't no sin to step out of your skin and dance around in your bones!" 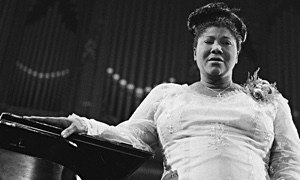