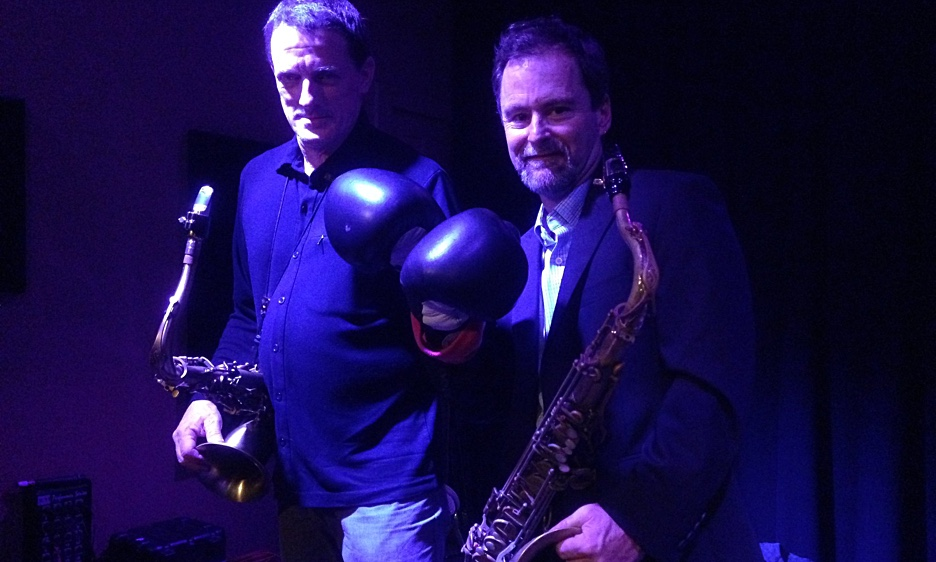 After a week of subzero temperatures, the fierce winter relented for an afternoon. Was the polar vortex's exodus precipitated by an old fashioned saxophone cutting contest? Some in attendance would say, absolutely. Enter the tenor saxophonists Michael Cox and Pete Mills and their recreation of the recording Boss Tenors: Straight Ahead from Chicago August 1961 (Verve, 1962). That particular recording with saxophonists Gene Ammons and Sonny Stitt typifies what was known as a "cutting contest," or tenor battle, a tradition dating back to Harlem rent parties of the 1920s.

This afternoon's battle was scheduled for one set, nine rounds at Columbus' Museum of Art, as part of Richard Lopez' Jazz Master Sessions. Lopez, a nimble fingered pianist anchored the rhythm section along with bassist John Allen and drummer Zach Compston. A proper cutting contest requires two musicians challenging each other on the same instrument, and an enthusiastic crowd. Something like the television shows X Factor or America's Got Talent without the snarky hosts.

These saxophonists are both great friends and members of the Columbus Jazz Orchestra; in addition to leading their own ensembles and teaching, both can be heard in multiple settings locally. That makes their battle more of a love fest, one that allowed the audience to not have to choose sides.

The quintet opened with the Ammons composition "The One Before This" from Boss Tenors, and they would perform four more tracks from the recording. Cox's butta'-like velvety tone might be described in this context as passive aggressive. It sneaks up one your ears, or maybe that was just his ploy to fool Mills into believing this was going to be a cordial affair. But he's no sucker. Mills returned fire—gloves off, giving horn aplenty. As solos were passed between the saxophonists, then piano, bass, and drums, the audience was schooled into this very sweet science. Insert your own boxing metaphor here.

But there would be no battle royal today, and the crowd wasn't required to choose sides. "Autumn Leaves" was delivered more in terms of mutual appreciation than clash, each saxophonist ready to defer to the other. Besides the aforementioned, the quintet covered the Ammon's composition "Counter Clockwise" and as an encore Stitt's "Blues Up And Down." If you listened closely, the saxophonists dropped pieces and parts of music by The Beatles and Thelonious Monk into their improvisations. The joy exuded on stage was palpable. Obvious was the admiration each had for the other. While Mills was running through "My Foolish Heart," there stood Cox listening not just as a musician, but as a fan and admirer. Same when Cox was soloing, Mills was almost dancing stage right. That, my friends is infectious.

With all due respect to Ammons and Stitt, the highlights of the performance were the original compositions by the saxophonists. Mill's premier of "Up To Go Down" a rapid burner blues composition succeeded in stitching together the two horns. Cox's "Hymn" was presented as a heartbreaker with first his horn eliciting a beautiful sentimentality before handing it to Allen's bass to wow the crowd.

"Blues Up And Down" brought this mutual appreciation society cutting contest to a close with a robust adieu. Watching Zach Compston at his kit drumming conjured up the image of a smiling Billy Higgins with the ease (and pleasure) he went about his work. Note to the series director, how about next, a drummer's battle royal?