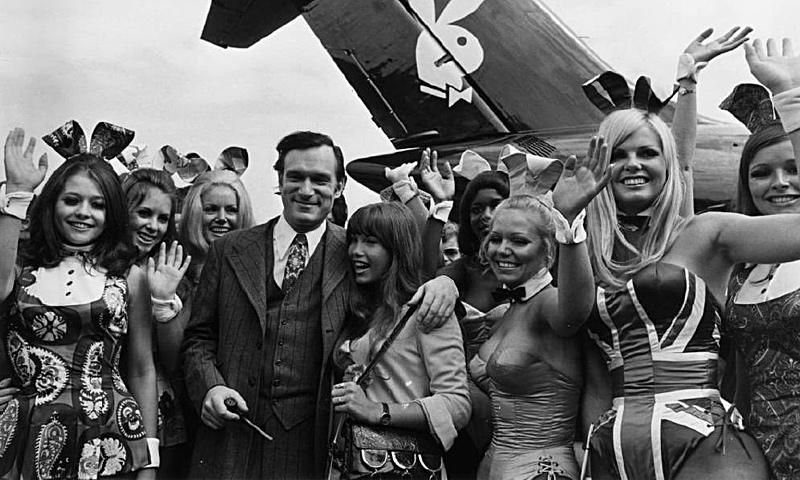 It could be said that the Playboy Empire is as well-known for the furtherance of Jazz as it is for the depiction of young ladies in various states of undress.

If, for some reason, one were to make a list of the most famous and influential lovers of Our Music, one would find it a Sisyphean task. Jazz lovers come in all shapes and sizes, and from all walks of life. One would find us well represented across the entire spectrum of society, from sports to entertainment to politics and then back to sports because frankly, I've had enough politics for one lifetime lately.

While there are a myriad of Jazz fans represented all across our culture, some names stand out. As previously profiled here, there is Academy Award winning director and actor Clint Eastwood. There is NBA all-time scoring leader Kareen Abdul Jabbar. And most people don't know that Santa Claus (Father Christmas, to our British friends) routinely delivers presents all over the world to the soundtrack of Coltrane's Live At the Village Vanguard CD box set. Then, there is the inestimable Hugh Hefner.

Best known as the founder of Playboy magazine, Hefner has espoused Our Music as the soundtrack of the Good Life since the 1950s. It could be said that the Playboy Empire is as well-known for the furtherance of Jazz as it is for the depiction of young ladies in various states of undress. It certainly has been said, and by no less than Your Own Personal Genius, so there.

Hugh Marston Hefner was born on April 9*, 1926, in Chicago, Illinois, to a couple of teachers. He was raised in a conservative Midwest Methodist household, which is a fancy way of saying boring. It is little wonder he sought out a livelier life filled with kicks later on, after serving as a writer for an Army newspaper during World War II. Once out of the Army, Hefner went to work for Esquire magazine as a copywriter, leaving in 1952 after a dispute over a $5 raise (which was good money in those days).

Raising $8,000 from investors (including $1,000 from his mother), Hefner started Playboy magazine. The original name of the magazine was supposed to be Stag Party, but Hefner decided against that after learning that this was also the original title of National Geographic magazine**. The premier issue sold over 50,000 copies and featured nude pictures from Marilyn Monroe's 1949 calendar as the first of what would become an iconic centerfold.

Right from the beginning, Hefner envisioned Playboy as a lifestyle magazine for the American male in a prosperous nation that had just come out of a long Depression and a massive world war. Playboy's readers would be tuned in to all aspects of the Good Life at the dawn of the Golden Age of American Culture. The playboy of the title would be a man of refined and discerning tastes, and one who enjoyed looking at women who themselves enjoyed being looked at. By modern standards, the nudes of Playboy are almost quaint. But they represented a considerable departure from the pre-war attitudes towards sex and nudity. Pornography certainly existed before the war—the first pornographic film was made in 1915—but Playboy strove to take the female nude out of the realm of the brown-paper-wrapper crowd and return it, if not to the place of great art where it had existed in Europe for centuries, a place in society more befitting natural beauty.

Playboy's models were fresh-faced girl next door types, not the kind of women normally associated with posing nude. And that's one of the things that made Hef's magazine stand out. Sex was supposed to be fun, to be normal, natural, and celebrated, and the female form with it. Playboy was, in many ways, the shot across the bow at the beginning of the sexual revolution. Playboy was not just about the nudes, though they were what came to most strongly identify with the magazine. There was also the quality of the writing, featuring serious prose, in-depth interviews with important figures of the day, and top flight fiction from the start. The old joke about Playboy, "I only read it for the articles," wasn't necessarily just an excuse.

But what the hell does all this have to do with Jazz?

I'm glad you asked. In this invented lifestyle for the modern age, Hef decided that Jazz was the go-to soundtrack. Jazz was the hippest music around, and had been for decades. It is not a far reach to think that Hef may have been exposed to Jazz in his early upbringing, as Chicago was once briefly the epicenter of Our Music. Though Bix Beiderbecke and the vaunted Wolverines were gone by the time Hef was a child, there was still enough Jazz in the air to enliven even a young Hef's drab, sepia-toned world.

Playboy championed Jazz at a time when most music critics were looking in all the wrong places for a truly American art form. Even the most forward-thinking composers of the era, the Aaron Coplands and their ilk, were still just building upon the European tradition. Jazz was bursting at the seams of the staid and academic classical world, ripe with musical development rivalling the greatest of the old European masters. Mozart was known as a great improviser, though his inventions are lost to history because he existed over a century before the advent of recording technology and record company PR flacks.

In 1957, Playboy produced a two-record set of their Jazz All-Star series, featuring performers from Pops to Frank Sinatra to Dave Brubeck. They produced a second edition in 1958. Hefner then held the first Playboy Jazz Festival at Chicago Stadium in 1959. However, it would be another twenty years before the second Jazz festival, held this time at the Hollywood Bowl where it would remain to this day. While there is some debate over why it took two decades between festivals, the most likely reason is that good quality catering doesn't just happen.

Playboy produced two television shows, Playboy's Penthouse in 1959 and Playboy After Dark in 1969, which also featured performances from top-flight Jazz talent. Then, in 1960, the first of the legendary Playboy Clubs opened in Chicago, providing a constant venue for some of the biggest names in Our Music. Add to that the support for Jazz in the pages of the magazine itself, beginning with an article about the Dorsey brothers in the very first issue, and you can see how deep the commitment ran. Hefner was often quoted as saying that he associated with Jazz more than any other form of popular music.

Meanwhile, back in Chicago.

Hefner wasn't just about creating some prepackaged Playboy lifestyle to sell magazines, he set about earnestly living up to the standards he set in print. As his creation began to blossom into an empire, Hefner established the Playboy Mansion as a happening spot for the kinds of soirees most American males could only dream about. Clad in silk pajamas and smoking his trademark pipe, Hef presided over the proceedings like the grand master of ceremonies he was, provoking the envy of many and providing a vicarious thrill for every workaday guy trying to get through his day without strangling someone with his tie.

When Hefner moved the empire west to Los Angeles, vacating the original Playboy Mansion for new digs in 1974, his lavish lifestyle became the stuff of legend. Being invited to a party at Hef's place became a symbol of "making it" in the world for the select few. I'm going to consider the fact that Your Own Personal Genius has yet to be invited as a mere oversight.

Lest one think that Hefner was all about hedonism and dissipation, he has also been vocal in his support of First Amendment rights. So much so, in fact, that his daughter Christine (who succeeded him as publisher of Playboy) created the Hugh M. Hefner First Amendment Award in his honor. Hefner also champions other causes, from helping to restore the Hollywood sign to endowing a chair (and a modest desk) at USC's film school for the study of American film.

As for the personal experience of what Hefner created, I can say it was Playboy that hastened my coming of age in the mountains of Virginia back in the 1980s. The magazine showed me a life that lay just beyond the blue-collar existence waiting for me if I followed in the local tradition. By rights, I should have gone through school, got a job with the railroad, and married my high school sweetheart. I should have listened to country music and 70's rock and watched whatever films came to the local movie house each week. I should have drank canned American pale lagers and never expanded my palate beyond the Appalachian staple beans and cornbread of my youth.

More than anything else, Playboy served as an instruction manual and not just fuel for my raging teenaged hormones. It taught me about good music, food, and movies—all foreign and domestic. I also discovered literature that was not to be found at the city library. In Hugh Hefner, I found an aspirational figure. Maybe I couldn't live my life surrounded by beautiful women and A-list celebrities, dressed in silk pajamas and a bathrobe, cradling a rocks glass filled with Jack Daniel's in my manicured hand, but I could be more than was expected of me. I could develop a taste for Jazz and Kurosawa films and fine bourbon. I could appreciate a dry-aged T-bone cooked perfectly medium rare. I could believe that a woman like Sherry Arnett (Jan. 1986) would give a guy like me the time of day (1:21 PM).

If we were to consider a Mount Rushmore of famous Jazz aficionados, Hugh Hefner would definitely be among the short list of candidates to make the monument. Along with Clint Eastwood, Kareem Abdul Jabbar, and our own Commodore Ricci (whose lifestyle in the glamorous suburbs of Philadelphia rivals that of Hefner's). As for Your Own Personal Genius, I would prefer to be on the Stone Mountain of Jazz, along with fellow Southerner C. Michael Bailey.

* Which also happens to be my mother's birthday. Coincidence? Yes. Yes, it is.