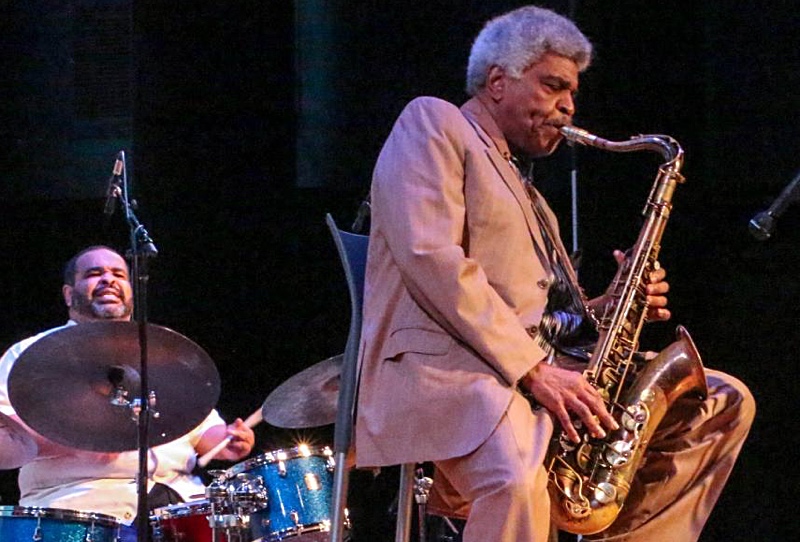 The gifted pianist and composer Eric Reed plays at times with a lightning-quick, cat-like touch, at others with slow, deep resonance, lush and lyrical. He can change from one to the other in the nanosecond it takes his brain to command his deft fingers; the sounds that pour out of the big black Steinway piano are joyous, sad, loving, moving. There's a looseness to the feel of his playing that, as he has said, allows the music to "breathe."

To open his quartet's recent set at SMOKE Jazz & Supper Club, he chose a soft, bluesy gospel tune, "Calvary," playing on this Sunday evening with all of the heartfelt spirit of person of faith. Reed is a musician, and a man, of deep spirituality that he has carried with him since his earliest days as a prodigy playing gospel in church in West Philadelphia to his current home in Los Angeles; his sense of music as a gift from above—as love incarnate—not only reflects much of what he chooses to play, but it also informs his professional purpose.

The quartet's second tune, "Someone Else's Love," opened with Reed's somber piano solo, an ocean of notes sculpting a tune in time before it changed gears with Dezron Douglas's exquisite bass line and Billy Drummond's punchy drumming; Tim Green's alto saxophone arrived to settle and unify the whole band. Reed next paid homage to the late great pianist-composer Mulgrew Miller, featuring the Miller composition, "For Those Who Do," a sophisticated tune richly colored by Green's sax and undergirded with the counterpoint of Drummond on drums and Douglas on the bass, flavoring and kicking up the tempo with a splash of Latin rhythm. Reed next dedicated his own composition, "Peace Medley," to the future—"we've got to leave something for the kids," he said. The tune began as a sad piano meditation before changing gears into brighter notes and faster tempo—a feeling of hope for better days ahead. The set ended with the quartet jamming through an original composition, the title track from Groovewise, Reed's most recent album release; once again, soft piano chords ruminated and reflected before Green's alto saxophone opens up and leads into another feature for Douglas on the bass, and the tune took off. Reed's was the sound of soul expressing itself in real time—pained but hopeful, exploring the depths while staying grounded in the structure and the rhythm of an arrangement.

As Reed has preached throughout the set, he's on a personal and professional mission to help music and love conquer hatred and fear. "There's too much hate," he told the packed house. "We can do better. We've got to do better." Amen. Eric Reed's gift is a gift to the world.

Ordinarily, one might not think that a college radio station, run and managed by undergraduates, could be relevant to the scope of a column dedicated to following the goings-on in the jazz capital of the world. But Columbia University's radio station, WKCR is different. First, the station has been featuring jazz continuously on its airwaves (89.9 FM; streaming at wkcr.org) since 1941; in that inaugural year, a young local pianist named Thelonious Monk, who rarely spoke to anyone, stopped for a chat -in retrospect, an early indication of the station's future importance. Second, the station is home to Phil Schaap, Class of '73 and still playing jazz at the station six days a week, when he is not producing records or teaching jazz history. A veritable "walking history book of jazz," Schaap is rightly celebrated as "an American classic" by musicians and listeners alike; in the May 19, 2008, issue of The New Yorker, he was the subject of a long, amusing profile written by the magazine's editor, David Remnick. Since Schaap's undergrad days, he has been playing and discussing, and discussing, the music of many jazz greats, from Louis Armstrong and Sidney Bechet to Miles Davis and John Coltrane, and others. His primary focus, to the point of obsession, has been the music (and life) of Charlie Parker, whom he ranks along with Picasso, Shakespeare, and Bach as revolutionary geniuses of their respective art forms. Each morning at 8:20 Eastern Standard Time for the past three decades, Schaap has taken listeners into some aspect of Parker's relatively brief career in sub-atomic detail; recently, he concluded a several-year long marathon during which he gathered everything Parker ever recorded and played it in chronological order. Bird lives.

For all of these reasons and more, it was appropriate that on in early October, on the eve of what would have been Monk's 99th birthday, WKCR held a 75th birthday celebration for itself. Opening the concert was the unique artistry of Henry Grimes, a free jazz double bassist, violinist and poet, and a man with quite a backstory. Grimes came out of Philadelphia in the late 1950's and was quickly recognized and hired by top players like Charles Mingus, Gerry Mulligan and Monk. Grimes' career continued to expand in the 1960's as he connected with many of the leading players exploring musical boundaries—Cecil Taylor, Pharoah Sanders, Archie Shepp and Albert Ayler. Then in 1970, after moving from New York to Los Angeles, Grimes dropped out of sight. Thirty-five years later, after being presumed dead, Grimes returned to the music world; since his successful return, he has been recording and touring and performing with a vengeance, as if to make up for lost time.

In performance, the octogenarian appears to be extremely frail as he saunters onto the stage and slowly picks up his olive green bass. But then, all at once, he attacks the instrument with pizzicato finger popping and produces a frenzy of improvised notes—disconcerting, difficult, almost disconnected-sounding at first, sound that is as free as music has ever been, or can be. The attack slows; he reads a poem from the music stand in a shaky voice; switching to the bow, the bass yields deep growls, swirling screeches and scratches and long drones. The listener closes his eyes to sharpen the auditory sense and absorb the sound more acutely. Time stops, sound deepens, and the immediate difficulty and disconnect melt away and the plucking and bowing are fused—the listener is almost surprised to be at once floating in a transcendent feeling of meditation. It's an "aha" moment: Grimes has executed a musical dive with high degree of difficulty: deeply affecting improvised art; action painting in sonic form.

The George Coleman Quartet follows Grimes, bringing the audience back to the more form-bound pleasures of hard bop. An outstanding unit led by George Coleman on tenor saxophonist and featuring his son, George Coleman Jr., on drums, Rick Germanson on piano and John Webber on bass, the music they play is soulful and tight, driven by bluesy tenor saxophones solos, sparkling piano runs and explosive drumming. Coleman, another octogenarian, first came to fame in the mid-1960's with the fabled Miles Davis quintet that was powered by the scintillating young rhythm section of Herbie Hancock on piano, Ron Carter on bass and Tony Williams on drums. That band's two classic live recordings, Four And More and My Funny Valentine, both taken from a memorable concert at Lincoln Center in February 1964, alone would have assured Coleman's reputation in the jazz pantheon, but he's achieved much more musically in the ensuing five decades, up to and including his most recent release, the critically-acclaimed, A Master Speaks. And on this night at Columbia University's Miller Theatre, Coleman and his band are the perfect nightcap to toast and celebrate the long-running and important jazz landmark that is WKCR.