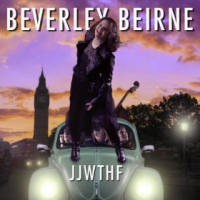 What do the following artists have in common? Adam & The Ants, Foreigner, Kajagoogoo, Billy Idol, Bananarama, Right Said Fred, Kim Carnes. None of their songs are staples of the jazz vocalist's repertoire? Not long ago that would have been an acceptable answer, then British singer Beverley Beirne recorded her second album, Jazz Just Wants To Have Fun. Now those artists have something else in common—they stand every chance of becoming staples of the jazz vocalist.

Beirne's chosen songs span the period from 1973 (Slade) to 1992 (Right Said Fred's "Deeply Dippy"). They were part of Beirne's formative years and have stood the test of time, even if they haven't crossed over into the jazz world. Although some jazz artists have recorded pop and rock songs of the period, few have taken Beirne's step of recording an entire album of these classic songs. Beirne has a talent for recognising within these songs the seeds of jazz—the phrasings and rhythms that can bring out the swing that might not be obvious to many. It's not a huge step from the rich, glossy '80s pop of ABC's "When Smokey Sings" to the engaging, sophisticated, version to be found here, but many of the other songs undergo a much more radical transformation. Bananarama's "Cruel Summer" gets a Latin makeover, courtesy in particular of Rob Hughes's flute and Romero Lubambo's guitar. "Prince Charming" replaces Adam Ant's over-the-top drama with something altogether cooler. Cyndi Lauper's "Girls Just Want To Have Fun" (the inspiration for the album's title) is a four-four stomper that should get Beirne's concert audiences up and bopping. Carnes's "Bette Davis Eyes" is stripped of its dated electric keyboards and synthesized drums and brought back to a more affecting life by the band's acoustic instruments.

Slade's "Come On Feel The Noize" (a slight alteration from the original spelling) is a '70s rocker that piledrives its way along and remains a dancefloor and radio favourite today. It's a great example of Beirne's ability to radically and successfully re-work a number. She opens her version with a slinky vocal and bass duet, then adds drums, sax and piano to shift the tempo and add a swinging groove. It's pure jazz. Jazz does want to have fun—Beirne, her band and a great set of surprising but much-loved songs let it do just that.

Come On Feel The Noize; Prince Charming; Bette Davis Eyes; Ghost Town; Deeply Dippy; When Smoky Sings; Cruel Summer; Pop Muzik; Too Shy; Hot In The City; Waiting For A Girl Like You; Girls Just Want To Have Fun