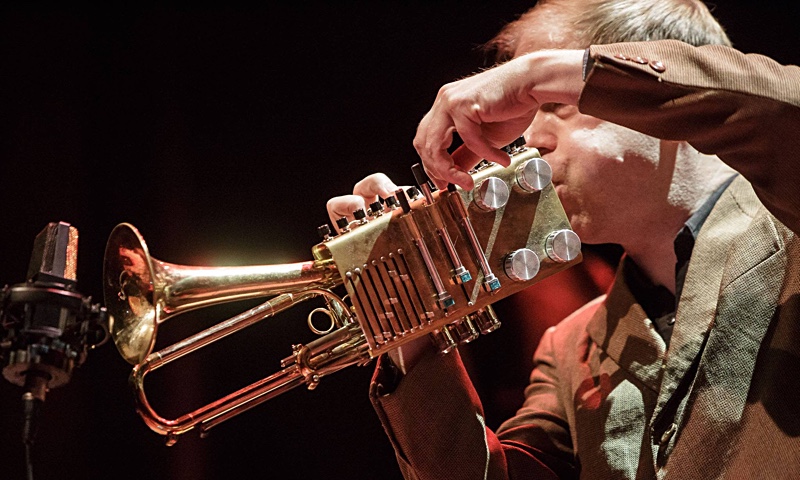 Jazz Jantar is one of the less well-known Polish festivals (outside of Poland), but it has been running in the northern port of Gdańsk for two decades, and is housed by Klub Zak, an arts centre that has roots stretching back 60 years. This might be the festival's 20th edition, but the collective memory of the club is hazy, and the archives less in evidence as the decades spool backwards to its old location. Having steadily built up, Jantar now spans 10 days, presenting mostly two (but sometimes one, or three) sets each evening, displaying a notable good taste via its three programmers. 'Jantar' refers to amber, for which this coast is renowned (but it's also Portuguese for 'dinner,' appropriately). The Zak sound is well-balanced, the room darkly atmospheric, and there's a buzzing café bar just across the foyer. Before your scribe arrived, folks had already been enjoying sets by Steve Lehman, Peter Brötzmann and Laura Jurd, but there were still four more nights of heavy pleasure in store, before the fest finished.

The first observation is that mainline American jazz acts are happily seated beside maverick extremists (some of these also being American), and the contrasting blend works out just fine. On the Thursday, a pair of reasonably straight-ahead Stateside bandleaders shared the bill. Saxophonist Miguel Zenon led his quartet with Luis Perdomo (piano), Hans Glawischnig (bass) and Henry Cole (drums), delivering a firm set of their expected post-Coltrane, solo-heavy numbers, extended yet more-or-less unremarkable. It was the following performance by trumpeter Ambrose Akinmusire's quartet that surprised, particularly following the leader's somewhat self- conscious and stilted premiere piece at Jazzfest Berlin, the previous week. Now, the quartet was found in a more assured state, thrusting with poise, and loosening up into some spirited extensions. Akinmusire was joined by Sam Harris (piano), Harish Raghavan (bass) and Justin Brown (drums). The leader has a very broad range on his horn, unafraid to simply chug out a repeated figure, almost like a percussionist, and to talk into his tubes, particularly in the low registers, burbling and grumbling. As the set progressed, the interactions between the foursome became ever wilder, pushing hard with a cumulative sequence of increasingly free jazz-rooted solos. There's the sense that Akinmusire doesn't often let loose like this, more inclined as he is towards a cooler, more poised expression.

On Friday, the apparent tradition of opening with some hardcore Polish extremity was in place, as Chryste Panie (Christ, Lord) coaxed drones out of drum resonance, engaging in the absolute minimalism of a very low event horizon, a series of cymbal thwicks ending with a determined repeat. One of their two percussionists uses a baraban, a small folk drum that seems to have its origins in the north of Russia. Not that it's used for such purposes as anything approaching straight percussion, employed, as it seems to be, in the murk, as a generative signal for electronic perversions. Low blue and purple light casts a sickly, decaying corpse glow, almost completely dark, scarce in terms of both illumination and sonic activity. The mission is to shape a cumulative aura, improvising, but within a unanimously narrow field. If this needs to be named as jazz, then it's of the sort created by such combos as AMM, but in an electronicised guise.

Get The Blessing, from Bristol, England, normally sound abnormal, crashing noir jazz into noir rock, at a complicated clip, but now, coming on after Chryste Panie, they sounded positively cheerful. We could actually see what they were up to, bathed in throbbing stage lights, and moving around, cutting shapes for drama, nodding their heads, and tapping their boots. Sheer extroversion of elaborate riffs, speeding solos and jacknifeing beats. This quartet have been refining their sound for 17 years now, driven up the hill of their bassman Jim Barr's exceedingly dry wit (which might be difficult for even fluent Polish English-speakers to follow, crammed as it is with obscure regional and historical references), hopping and twitching to the scatter-beats of drummer Clive Deamer, and fronted by the veritable crossed swords of Pete Judge (trumpet) and Jake McMurchie (saxophones). Both of these last two were regularly tweaking their output via a spray of floor effects units. At strategic excitement points, they rushed towards each other, literally locking horns, as if they're members of AC/DC or ZZ Top. Clarion Mexican trumpet plunged into slurry bass, dislocation drums sliced sideways, down dangerous neon-fogged streets, bearing teasers (imaginary?) of forerunner tunes such as "Miss You" (Rolling Stones 99) and "Master Builder" (Gong).

As the curve bent back into shape from Polish drone sparseness, through English post-Ornette, post-Lounge Lizards pulp jazz, and finally into the soothing sounds of Joe Lovano's Classic Quartet, the latter suffered heavily in the excitement stakes, even though the Stateside saxophonist was in fine, stretching-out form. Nevertheless, it was time to slide into the ease of familiarity and slickness, which may or may not have been a disadvantage, caused by such broadly spanning programming decisions.

Curiously, there was a strong feeling that the Jantar audience is mostly receptive towards such strong contrasts, and was instructive to follow the sometimes lop-sided route of an evening's collective narrative. Clearly, this is an individualist advantage held by Jazz Jantar. The festival featured several thematic threads throughout its unwinding, and one of 2017´s was a focus on the jazz of Portugal. On the penultimate night, the Red Trio were augmented by German trumpeter Axel Dorner and Swedish vibraphonist Mattias Ståhl, their core membership being Rodrigo Pinheiro (piano), Hernani Faustino (bass) and Gabriel Ferrandini (drums).

This expansion understandably took the trio on a much-expanded ride, making their sound even harder, faster, more intense and extroverted. Dörner's modified horn allowed him to sculpt electronic effects and interior amplification, producing a landscaping quality, but then he could swivel inside the next phrase with an untreated bebop crackle, chattering with a sharpened edge. Ferrandini also had a striking input, surely one of the most articulate, resourceful and sonically varied sticksmen on the scene.

For the final night, the Portuguese trumpeter Susana Santos Silva helped climax the festival, following the extreme tenor saxophone quartet Battle Trance, from Brooklyn. Impressive on a nightly basis, Jantar still held this double bill up as a shining example of complementary contrast, even though both outfits emerged from the jazz perimeter. Travis Laplante dreamt of four tenor saxophones negotiating steely spirals of semi-composed, chops-testing intricacy, and so it was: the foursome came together in the real realm. There is still a large amount of improvisation allowed, but the signals for transitions had to be obeyed, keeping "Blade Of Love" whetted. During the extended piece, a remarkable flow of qualities paraded past, some displaying a grouped tonal hovering, others ramming into hard-blowing riff-cascades, with multiple instances of cue-ed chaos or stamina-loaded rigidity.

Once again, as a result of comparison, the normally free-wheelin' Life And Other Transient Storms, the Silva ensemble, ended up sounding almost traditionally restful, even though they too were inhabiting the outer mist-swirls of jazz improvisation. Silva was partnered by the Danish saxophonist Lotte Anker, out at the front, but the piano/bass/drums rear guard are also important to the group spread, of course. Anker and Silva's horns were closely entangled for much of the journey, pausing and cultivating careful spaces in-between their slow-motion confrontation. It was the first time that your scribe has witnessed anyone bowing a tenor saxophone, as Anker stroked horsehair along her bell-lip. Could we even hear this, or was it part of the subliminal spread? She continued to blow into strange orifices of her horn, getting flute-ey on saxophone. At times, there might have been a touch too much amorphous garnishing, and not enough Polish meat'n'potatoes, but a rousing trumpet and alto fanfare attained the required climax, following around 45 minutes of steadily coalescing substance.