Jazz in the New Millennium: Live and Well by Rick Mitchell 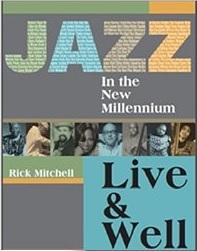 Much of jazz analysis and reportage is history; the exposition and re-exposition of old forms and older artists. Precious few books written about jazz today have contemporary artists or movements as their subject. Rick Mitchell's Jazz in the New Millennium: Live and Well happily flies in the face of the old with an eye on the present and new. His book is expansive, addressing among the "Living Masters," one Roy Haynes (b. 1925) to a "Rising Star" in Esperanza Spalding and Gerald Clayton (b. 1984). While that expanse includes bebop to the present, there are no exposes on Charlie Parker, Dizzy Gillespie or Miles Davis. Mitchell's book is devoted to those musicians living while it was compiled.

In 2000, Mitchell left his post as jazz and popular music critic at the Houston Chronicle to become a teacher and programming consultant for the Houston International Music Festival, Da Camera of Houston. The Da Camera coupled jazz and classical performance and survived only a couple of seasons as such while the jazz portion continued on its own. Mitchell wrote the program notes for the series and out of those Jazz in the New Millennium: Live and Well arose.

Mitchell organized his book around three groups of musicians: the aforementioned "Living Masters" and "Rising Stars" sandwiching the largest group under consideration "Prime Time Players." As such, Mitchell could not have made a completest list of any category as his subject matter was dependent on who was performing. That said, his lists are impressive. Included as "Living Masters" are Haynes, Randy Weston, Dave Holland, Kenny Barron and Wayne Shorter. Shorter's section, "Without a Net" details the saxophonist's 21st Century acoustic quartet including pianist Danilo Pérez (who is also a "Prime Time Player"), bassist John Patitucci, and drummer Brian Blade. At 81 at this writing, Shorter comes full circle with his most provocative music.

Among the "Prime Time Players" are saxophonist Joshua Redman, trumpeter Dave Douglas, violinist Regina Carter, and vocalist Cassandra Wilson. Wilson's importance to jazz vocals since the 1990s cannot be over-estimated. She redefined jazz vocals with Blue Light 'til Dawn (Blue Note, 1993) and New Moon Daughter (Blue Note, 1995). She covered Robert Johnson, Van Morrison, and Joni Mitchell with equal aplomb while establishing a new band format including instruments better associated with folk and blues. Taking her cue from Miles Davis wide-open performance of "My Man's Gone Now" on We Want Miles (Columbia, 1982), Wilson put her stamp on all of the jazz vocals coming after.

Mitchell displays his acute grasp of the music and its meanings and how each of the artists he spotlights fits into that modern picture of jazz and beyond. An easy and informative read for those wanting to know who performing today in jazz are the first to go to once the classic performers are assimilated into collections and playlists.