Jazz In Buenos Aires: Fresh Breezes From The South 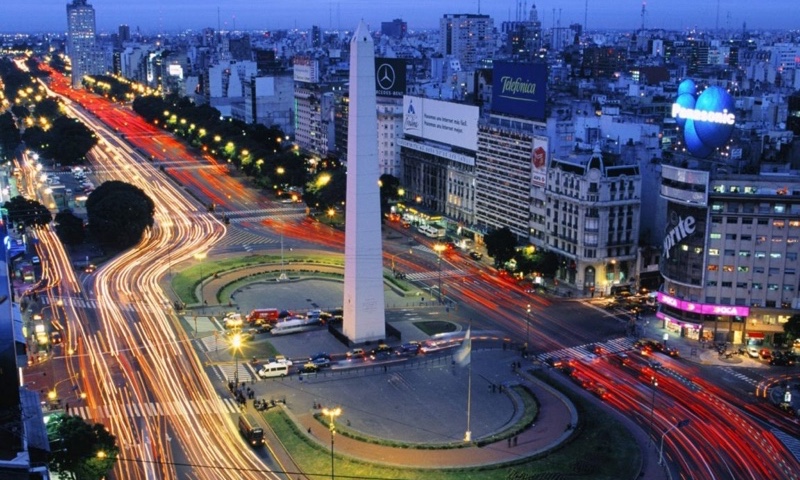 By MARK HOLSTON
September 25, 2015
Sign in to view read count

Longtime regular customers trickle in with picnic baskets and grocery bags full of homemade pasta dishes, freshly baked bread and sweets. Bottles of Malbec begin to circulate and the party spills out into the arcade’s common area.

Galería Apolo is one of many 1950s-style shopping arcades that flank Avenida Corrientes, the gaudy, pedestrian-packed "Broadway" of Argentina's cosmopolitan and bustling capital city. A dimly lit galería, it's the kind of one-stop-shopping destination where tiny specialty shops sell everything from comic books to costume jewelry and a visitor can get a watch repaired or satisfy a caffeine craving. It is a miniscule retail space called Minton's, however, that commands the most fervent customer loyalty. Buenos Aires boasts many small CD and LP shops, but this postage stamp-size space, with its emphasis on mainstream and avant-garde jazz, has become a home away from home for many of the city's most knowledgeable jazz aficionados.

A tradition that says a great deal about the resilient character of the jazz culture in Buenos Aires unfolds at Minton's around noon on the last Friday of every month. Longtime regular customers trickle in with picnic baskets and grocery bags full of homemade pasta dishes, freshly baked bread and sweets. Bottles of Malbec begin to circulate. The party spills out into the arcade's common area. The revelers are virtually all middle-aged men—among them journalists, psychiatrists, sociologists, authors and other members of the city's well-cultivated intelligentsia. Usually one of Argentina's many noted jazz musicians drops by at exactly the right time to be warmly received and have an opportunity to tout their new release or upcoming performance.

Guillermo Hernández is Minton's owner. The shop bulges with new inventory, much of it CD reissues imported from Europe. He smiles as he hauls out a bottle of Minton's own line of red wine emblazoned with a hip, '60s-style label. Then, he beckons visitors to inspect his latest acquisition; a custom-made LP cleaner. It is a locally made masterpiece of exacting mechanical perfection.

The story of Hernández's early upbringing, how he started this enterprise 23 years ago, and how it has become a veritable altar of jazz culture in Buenos Aires, was celebrated in the 2012 documentary Minton's—20 Años by director Jorge Fondebrinder. Loyal patrons, like many of those who show up for the monthly get-together, are featured relating personal accounts of their history with Hernández and patronage of Minton's.

One local jazz luminary featured in the documentary is Adrian Iaies, one of the city's busiest pianists and artistic director of the annual Buenos Aires Jazz Festival. Given the country's precarious fiscal situation and dicey political circumstances, it's remarkable that the city is able to stage a six day festival that includes over 50 performances in seven venues. They range from the open air amphitheater at Parque Centenario, a major urban park, to the iconic Teatro Colón, one of the world's most renowned opera houses. Buenos Aires' two best jazz clubs, Café Vinilo and Thelonious, also host performances, as well as the theater at AMIA, the cultural center for the city's large Jewish community. The building was bombed 21 years ago, with a loss of 85 lives, and concert goers are required to show up an hour early, bearing proper identification, to be allowed entrance.

Today, Iaies is a busy guy, putting finishing touches on this year's talent line-up. At the moment, headliners include guitarist Peter Bernstein and his quartet, Brazilian bassist Sizão Machado and his trio, French pianist Manuel Rocheman and his trio, and Spanish pianist Albert Sanz. Trumpeter Jim Rotondi will be on hand to conduct a big band comprised of local conservatory-trained musicians, and Michele Weir is on tap to conduct vocal workshops. Other major artists will be announced before the November 10 concert kickoff arrives.

Jazz has been prospering in Argentina since the pre-World War I days. North American and European ragtime bands began performing in Buenos Aires as early as 1910. Given the preponderance of well-trained local musicians, it was natural that these artists would hear, appreciate, and emulate the new sounds coming from abroad. In 1927, the appearance in Buenos Aires by U.S. pianist and arranger Sam Wooding and his band, The Chocolate Kiddies, further strengthened a passion for jazz. Since the 1950s, Argentina has been known for its penchant for modernist styles. Pianist Boris "Lalo" Schifrin was "discovered" by trumpeter Dizzy Gillespie while on tour in South America, and soon made his way to the U.S. where he gained fame as both a jazz pianist and composer of motion picture and television soundtracks. Many other prominent Argentine jazz artists were to follow in Schifrin's footsteps over the following decades.

The festival is a living reminder of the influence that jazz has exerted here for a century. One of an impressive list of initiatives of the municipal government's cultural affairs office, the annual festival has become an important part of the city's contribution to the arts. Last year's event featured guitarist Pat Martino, pianist Myra Melford, clarinetist Ben Goldberg, vocalist Dena DeRose, and a myriad of European and national talent, including bassist Horacio Fumero, trumpeter Mariano Loiacono, guitarist Ricardo Lew, and many others. Stylistically, the festival leans heavily toward genre-defying artists who prefer a "free" approach to their sets, but the concert rundown also included the traditional swing of saxophonist Jorge Anders and his group, the Trad sounds of the Fénix Jazz Band, a venerable ensemble renowned over the course of four decades, and the funk of the Don Groove Ambassador, among many other stylistic permutations.

Pianist Melford was particularly impressed by the high jazz IQ of the Buenos Aires audiences. She commented to DownBeat Magazine that "It was great to discover a whole new culture and part of the world that, for us, is totally into the music. We found the local musicians to be really inspiring—great players and very open-minded to new ideas." Pat Martino, who was interviewed in depth by a local music journalist before a rapt audience of several hundred, also commented on the sophistication of local audiences.

For his part, artistic director Iaies sees the festival as a meeting place and an invitation to dialogue. "A dialogue," he commented, "between tradition and avant-garde, between the city and the type of music that will be its natural soundtrack for several days." This year, the Buenos Aires Jazz Festival will be presented from November 10 through November 15.