Dr. Michael White: Jazz from the Soul of New Orleans 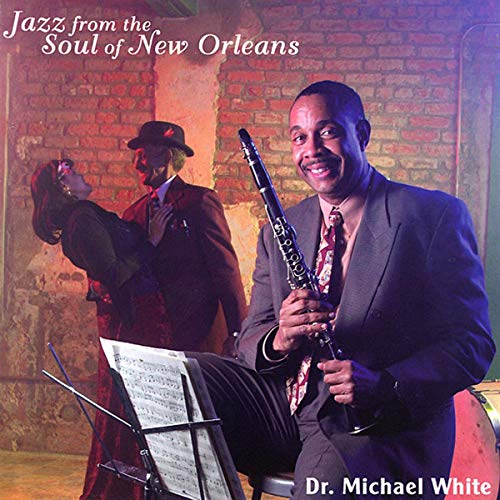 At the burning bush...

The problem I have had with Dr. Michael White has been that I felt him overtly reverent to New Orleans Jazz to the point of its asphyxiation (a complaint I frequently voice for Wynton Marsalis and the music of Ellington on). Jazz from the Soul of New Orleans causes me to refute my previous prejudices. Dr. White is a bit of the keeper of the flame. That flame, if you will, might be considered the source of Jazz— the New Orleans tradition. Rather than being eclipsed by standing so close to the flame, White instead converses with it in its own language. Peppering the public domain standards for "Summertime" and "Fidgety Feet" with his historically informed originals "Late Night Blues" and "Horn Man Blues," Dr. White colors within the lines without being boring or repetitive. His support is capable producing that brilliant New Orleans counterpoint that 100 years ago was definitely not coloring within the lines.

Jazz from the Soul of New Orleans

is a solid traditional jazz release with contemporary compositions in the old style. White's two Afro-Caribbean pieces ("Martinique" and " Caribbean Girl) both contain a bit of Hebraic smoke in the finish. His contemporary gospel in "If We Ever Needed Jesus" recalls sweaty Louisiana churches in the summertime. His slow blues "Late Night Blues" is a lazy summer evening at Preservation Hall under the ceiling fans. "Horn Man Blues" is a hung over funeral stomp on a Monday morning with a bit of entendre for the recently deceased. These, with the standards, provide a clinic in traditional jazz, albeit a slightly idiosyncratic one.