By CHRIS M. SLAWECKI
March 1, 2006
Sign in to view read count
Most jazz fans would probably accept the notion that the jazz industry could do a better job of making the music seem more relevant and enjoyable to young people. As the inevitable passing of time reduces the number of fans who can recall "the halcyon days of the late 1940s through the 1970s (or who know what "halcyon means), new jazz fans must come along to take their place. Without them, the jazz audience will continue to shrink toward disappearing.

Who will introduce today's kids to jazz, and how? Will they hear someone explain it like jazz is museum music, trapped in its historical time? Those children will hear jazz like they'd see the original Declaration of Independence on a class field trip, displayed behind protective glass, something to be more revered than enjoyed.

Or will today's children first hear jazz described in the clattering, flavor-of-the-moment neon glare of MTV / VH1 and other corporate entertainment media, as music that people might have listened to at one time but certainly weren't listening to today, music good for background and kitsch and Cosby Show guest spots but not much more than that?

Or would you rather have folks like Taj Majal, Claudia Acuña, Freddy Cole, Billy Preston, Pancho Sanchez, Dr. John and Joel Dorn introduce jazz to young people? Lisa Beth Kovetz sure would. Her Flying South Productions company, which specializes in short films and in children's media, has put together the three-CD Jazz Baby series to accomplish precisely that: To introduce jazz to children by pulling jazz concepts through melodies and lyrics with which children are already familiar—to introduce new music to children through old.

"After producing several straight-ahead jazz CDs, my husband and I produced a couple of baby boys, Kovetz explains. "It was then we discovered that there was very little music available that we could share with our children. Adult music was way too sophisticated for the kids and children's music too annoying for the adults. The idea for Jazz Baby was simple: high quality music parents can share with their children.

Kovetz is married to jazz vibraphonist Eldad Tarmu, who has released several acclaimed albums as a leader and has also recorded with the exploratory The Industrial Jazz Group. On Jazz Babies he contributes numerous arrangements, performs with Cole, Acuña, Barbara Morrison, and others, and performs a blessedly peaceful solo version of "Brahm's Lullaby.

Additional arrangements come from pianist, arranger, composer and producer Cengiz Yaltkaya, whose resume includes sessions with Gerry Mulligan, Randy and Michael Brecker, and Jay McShann (and Visits, a recent duet with vibraphonist Tarmu); and from the team of keyboardist Tom Adams and Cybill Shepherd, who also contributes chanteuse versions of "All the Pretty Horses and the Irish lullaby "Toora Loora Loora, a "Horner / Muffett medley, and "My Bonnie.

This first session opens with Janis Siegel, a founding member of the Manhattan Transfer, shining up a bright "Glow Worm with guitarist Frank Vignola. Cole comfortably glides through the island flavors of "Jamaica Farewell and his revisiting of the Harry Belafonte hit "Scarlet Ribbons. Acuña swings out "A Tisket, A Tasket, which in days past provided solid hits for Anita O'Day and Ella Fitzgerald, her vocal entwined in a playful dance with Tarmu's vibes.

Three-decade veteran vocalist Barbara Morrison, who has credits with every major jazz and blues performer from Dizzy Gillespie and Tony Bennett to Joe Williams and Keb Mo,' appears on all three sets; her version of "Sing a Song of Sixpence sparkles from fine solos on piano and vibraphone. This first set ends with Rosemary Clooney's playful hop with the Tony Mottola Orchestra through the Bart Simpson favorite "Teddy Bears' Picnic.

The master of New Orleans piano voodoo, Dr. John, who previously worked with Dorn in their Atlantic days, reunites with the producer to open this second session with a rollicking stroll through "Toyland. Another pianist, Billy Preston (the only artist to have recorded with both the Beatles and the Rolling Stones), contributes a darling "Clementine

Session three opens with a near-perfect match of material and interpreter in Taj Mahal's good-naturedly gruff romp through Pete Seeger's timeless "If I Had A Hammer, complete with the shuffling rhythm of a roadhouse blues and gooey Hammond B-3 organ solo. (Mahal has released several acclaimed takes of his own on music for children through the label Music for Little People.)

Acuña sparkles here, too, with a beautiful half-English, half-Spanish take on the lullaby "Rock a Bye Baby. Pancho Sanchez makes one of the biggest splashes on this third session, congas and timbales setting up cross-currents of rhythm with trombone and vibes and flutes as they bob up and down in unison through the Afro-Cuban swim "Row Row Row Your Boat.

Cole's warm rich voice glides through "Mary Anne, clad in colorful calypso garb, another well-considered match of music and musician; his son Lionel later adds "Hush Little Baby to end this third set. But perhaps the biggest and most beautiful surprise is the breathless version of "Home on the Range performed by Megan Mullally (Karen on Will and Grace). The tenderness and purity of her voice will surely touch your heart, whether you are six or sixty.

Jazz Baby From the Inside Out Chris M. Slawecki United States 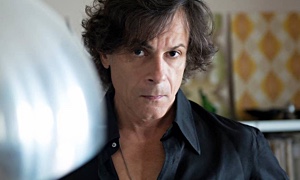