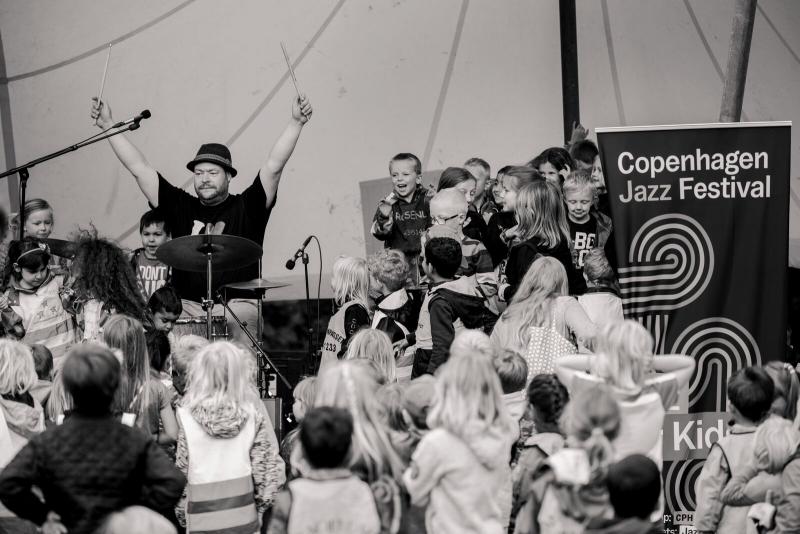 The Copenhagen Jazz Festival is a massive event, lasting 10 days, offering 1,200 concerts that envelope all corners of the Danish capital and draws an audience of about 250,000 people. Some of them are children, enjoying a special six-day program designed for them, featuring some of the best musicians performing at the festival. All concerts were performed outdoors, around noon, at the beautiful Søndermarken Park in the western suburb of Copenhagen, Frederiksberg.

The duo Folkegaven—drummer Kresten Osgood and saxophonist and clarinetist Lars Greve—kicked off the Jazz for Kids program on July 10. Both Osgood and Greve are prolific musicians in the vibrant Copenhagen jazz scene. Osgood is an acclaimed bandleader and recorded with Yusef Lateef, John Tchicai, Paul Bley, Masabumi Kikuchi and collaborated with countless others. Greve is more experimental in his spirit and is a member of the popular Girls in Airports group.

Their performance began with Osgood coming to the stage with a few twigs that he collected beforehand, playing hide and seek with the children. And from that point forward it was a continuous play and a series of fun games. A game of sounds, exploring sounds together—funny, strange, rhythmic and beautiful—as a communal celebration of Osgood, Greve and the vocal children with their parents. Singing and even playing together, as dozens of the children flocked to the stage to play on Osgood's drum kit, clearly enjoying banging the drums and cymbals, making noises, while Osgood, on pocket trumpet and keyboard, and Greve gently channeled this playful sonic chaos and taught the energetic children basic lessons in making music through listening to the others. Later, these curious, attentive children listened carefully when Osgood and Greve began to improvise freely, immediately affected by the joyous, positive energy of the musicians that moved many of them and their parents to dance with abandon.

An hour after the performance, other groups of children arrived at the park to experience an even more challenging set of music. The Swedish group Jazz Är Farligt med venner presented a theatrical-musical play based on the life of composer, band leader, poet and visionary thinker Sun Ra, who would have been 101 years this year. This group, dressed in the Sun Ra's Arkestra shiny silk clothes, featured musicians from Mats Gustafsson's Fire! Orchestra—vocalist Sofia Jernberg, alto saxophonist Anna Högberg and keyboards player Martin Hederos, who performed later that evening. The children looked fascinated by the dramatic, imaginative stories about Ra, his life and futuristic ideas, identified quickly with the innocent, cosmic message that Space is the Place (a week before NASA announced the discovery of the Earth-alike Kepler-186f planet). It took only short time before the kids jumped on stage, chanted along with the musicians the joyful and a bit noisy themes of Sun Ra, eventually pushing the musicians to play with the dancing children and parents off stage. Somewhere, in outer space, in another dimension, Sun Ra must have been happy with such a cosmic, transcendental celebration.

After the uplifting performances it came as no surprise that children came with their parents to see the concerts of The Thing and Fire! Orchestra. After all, music is a communal, spiritual play, between all members of the community, regardless of age.