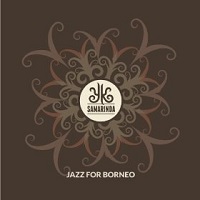 Ethnic fusion jazz is a term that has gained currency in Indonesia in recent years and is typically applied to bands who incorporate elements of Indonesian folk music—melodies and/or instrumentation—into a jazz-fusion aesthetic. The four-piece YK Samarinda from East Kalimantan, Borneo, falls into this broad category; its use of the sapeh (or sampeh)—a traditional lute originally used in ritual trance music of the Dayak and Orang Ulu people of central Borneo—lends a distinctive though secondary color to the more dominant jazz-fusion hues.

Formed in 2003 by electric guitarist Yusuf Koen and electric slap-bassist/vocalist King, keyboardist Yin joined two years later. The current line-up was completed in 2013 when M. Iqbal took the drum chair. For the most part, funk-heavy bass lines and soaring, melodious guitar are underpinned by unrelenting back beats and chordal keyboard comping. At the music's melodious and full-on extremes there are hints of Weather Report and Allan Holdsworth and it should appeal to fans of outstanding Indonesian guitar-fusioneers Tohpati and Dewa Budjana; Koen, who lights up Jazz for Borneo with some scintillating playing, belongs firmly in that esteemed company.

The pastoral strains of the sapeh introduce "Leleng," a folk song of the Dayak Kenyah tribe, but the folkloric reverie is soon smashed by a heavy beat, churning bass and Koen's mellifluous electric guitar head. Koen switches effortlessly between folk-influenced and smooth-jazz motifs, in between biting solos of fluidity and purpose. A brief sapeh outro rekindles the bucolic atmosphere of the muddy rivers, long-houses and dense jungle of Eastern Borneo.

There are a couple of other overtly folk-inspired numbers: on "Song for Hudoq"—a nod to the thanksgiving festival dance that drives pests from the crops—what soundslike amplified sapeh, tribal drums and vocal chants meet some of Koen's fiercest, metal-esque electric guitar soloing, in striking juxtaposition; similar elements color the catchy "Borneo," though there's greater emphasis here on the funk grooves and melodic hooks that are the band's stock in trade.

The cool, jazz-funk vibes of the slower-paced "Midnight in Samarinda" and the sunny "Paris Barantai" lie at the smoother end of the jazz spectrum, with Koen a constantly engaging soloist. Greater collective impetus propels "Aliens," where an urgent guitar-cum-keyboard head gives way to energized guitar lines; at the mid-way point, fast-walling bass and spitting hi-hat accompany Yin's most jazz-centric solo on piano -an interlude before the quartet returns to more animated jazz-fusion terrain. A Level 42-esque bass groove drives "Forfoza," an infectious tune that combines vocals and a piano vamp, yet another memorable guitar motif and well-articulated improvisations.

Jazz for Borneo is a vibrant calling card from a band beginning to make waves in its native Indonesia. The 'ethnic' side of the equation works seamlessly but is teasingly spare. Nevertheless, YK Samarinda's sharply defined blend of jazz-fusion celebrates groove, melody and no little virtuosity with panache, whilst forgoing some of the genre's noted excesses. A band to watch out for.