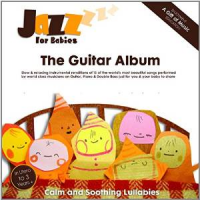 Just what is the target demographic for a typical jazz album? Twenty to thirty year-olds? Forty to sixty year-olds? Anyone with enough spare cash to buy a copy? This series of recordings from bassist Michael Janisch makes its target audience perfectly clear both in the title—Jazz For Babies—and in the bottom left of the rather snazzy album cover, where a brown circle boldly states "In Utero to 3 years +."

Janisch has put together a set of five albums under the broad umbrella of Jazz For Babies and released them on his own Whirlwind Recordings label. Inspired by his own daughter Eliza, Janisch's aim was to create lullaby versions of favorite tunes, performed on acoustic instruments. Jazz For Babies: The Guitar Album epitomizes his approach of taking a selection of classic tunes, keeping the melodies at their heart, simplifying the arrangements just a little and getting some world-class musicians to perform them and add some of their own improvisations.

Janisch and pianist Steve Hamilton appear on all five albums, including their duo recording, The Piano Album. The rest are trio outings, each devoted to a different lead instrument—Jim Hart's vibes, Jay Phelps' trumpet, Paul Booth's saxophone and, on this recording, Phil Robson's guitar.

Robson's gentle acoustic guitar playing lends itself perfectly to these tunes, either as the lead instrument or as backing to Hamilton's piano. The resulting music is rather delightful; proper music that will open up a young child's experience of this particular art beyond repetitive tales of wheels on buses or the destruction of green bottles. "Stardust" sounds positively refreshed by Robson's delicate backing, while "You Are My Sunshine" is gorgeous, Janisch's arco bass adding a touch of pathos to an otherwise upbeat collection.

Many of these tunes appear more than once across the five albums—"God Bless The Child" and "A Child Is Born" appear on every one—making choice of lead instrument rather than song selection crucial in delineation. It's also strange to see that there are no composer credits on any of the album sleeves. This may leave a few mums and dads floundering when the more curious young listeners demand to know who made up these tunes.

Jazz For Babies is grown-up jazz for little people; it should readily achieve its short-term goal of soothing and relaxing a tired toddler—and it may just kick-start a love of the music that'll last a lifetime.

A Child Is Born; Somewhere Over The Rainbow; You Are So Beautiful; Nature Boy; Georgia On My Mind; Embraceable You; Overjoyed; Body And Soul; God Bless The Child; Imagination; When You Say Nothing At All; The Very Thought Of You; Moonlight In Vermont; Stardust; You Are My Sunshine.