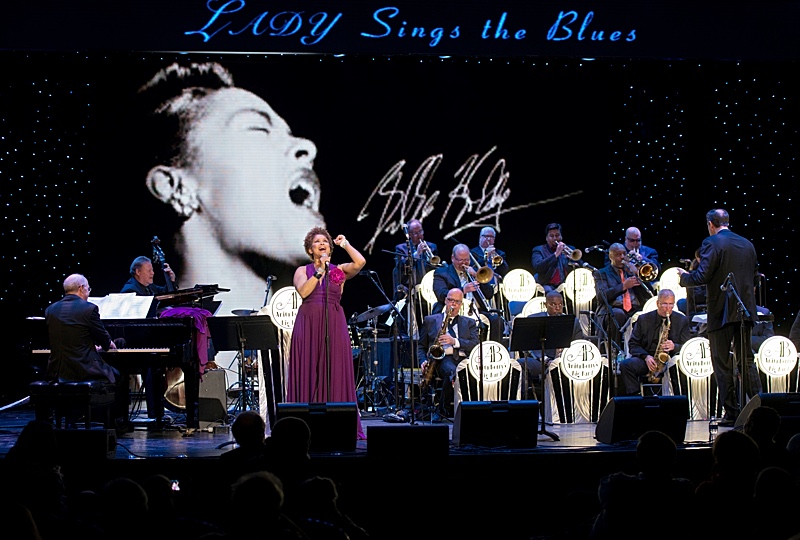 Where else can you rub elbows in the lunch line with the likes of Benny Golson?

Destinations hardly mattered on the annual Jazz Cruise hosted by Entertainment Cruise Productions this past January. In fact, no one seemed bothered when excursions to Grand Cayman Island were canceled the night before our arrival there due to choppy water. Most passengers enjoyed the extra day at sea as we sailed on to Cozumel. It was the total immersion in jazz that really mattered. From early afternoon to early morning, you could catch any number of musicians laying down their best lines in venues large and small. And where else can you rub elbows in the lunch line with the likes of Benny Golson, lounge alongside Hubert Laws on the promenade deck, and sail the sea with Grammy nominee Tierney Sutton?

The cruise was dedicated to jazz impresario and Newport Jazz Festival founder, George Wein, and celebrated the centennial birthdays of both Billie Holiday and Frank Sinatra. This cruise was sold out like its 13 predecessors. Management has added a cruise to the Mediterranean in 2015 along with its traditional Caribbean sailing.

What makes the cruise so successful that ECP, headed by Michael Lazaroff and Anita E. Berry, can charter Holland America's MS Eurodam for a full week? A well-run and staffed ship, certainly. Plus the restaurants with appealing and varied menus, well-stocked bars and ship's officers, mostly invisible to passengers, doing the full-time management. But mostly it's the music, nearly non-stop, duets, combos and a big band, with vocalists and without, from the welcome show on Sunday—a smorgasbord of talent—until the final jam on Saturday. Then all the horns gathered on stage to blow, in unison and solo, down the chorus line of ten kicking trumpets.

Michael, my cabin mate, and I caught legend Monty Alexander—he made Michael Jackson's ode to a rat named Ben sound like chamber music—multi-instrumentalist Arturo Sandoval with his band of young lions, and organist/horn player Joey DeFrancesco, to name only a few. But after trying to hear everyone and everything, we decided four hours of music a day would be our goal, one set in the afternoon and one at night. Every musician performed at least four times, so we were able to hear everyone on our "must" list, aided by the roster of activities in our mailbox each evening. It saved us racing from deck to deck and through meals, or leaving halfway through the first hour of one set to catch the last hour of another.

In the quest to be everywhere at once, some passengers left mid-set, the same folks who insisted on sitting up front. Often others rushed in to take their places but musicians noticed large gaps of empty seats or people filing out mid-song, and some were unhappy about it. These were, after all, dedicated jazz fans walking out on the same people they came to hear. Given the complexity of the schedule, there were bound to be conflicts and overlaps but in the words of one passenger overheard describing what seemed like rude and disrespectful intentions, "If it's exciting I'll stay, if not I'll go."

Here are a few highlights: Hubert Laws playing flute with vocalist Tierney Sutton and guitarist Larry Koonse were divine. Houston Person's quartet with John J. DiMartino (piano), Matthew Parrish (bass) and Chip White (drums) was tightly-knit perfection. The erudite gentleman who is Benny Golson told some great stories during his sets. He also made sure to play his best known compositions, "Killer Joe," and "Stablemates." Vocalist Gregory Porter was simply amazing, and the Christian McBride Trio blew our life jackets off. Joy is another word for nirvana.

We also caught two of bassist Marcus Miller's four unique interviews, first with bassists Buster Williams, John Clayton, Christian McBride and Tom Kennedy, then with reed players Phil Woods, Gary Smulyan, Jeff Clayton, Golson and Laws. The other two interviews were with guitarists one day and drummers another. Grammy winner Miller is a talented, relaxed interviewer who keeps it real. Lastly we were able to chat with Sutton before her interview with cruise host Dane Butcher. All of these sessions, musical and otherwise, were taped and aired on the ship's TV channel during the cruise.