Jazz at the 2010 Norfolk and Norwich Festival, UK

The Norfolk and Norwich Festival is one of the oldest arts and music festivals anywhere, having been established in 1772. In recent years, under the direction of Jonathan Holloway, the Festival has expanded and now offers an ambitious program of events across the city of Norwich. Jazz and related music are a core part of this programming, and the 2010 Festival brought an impressive array of musicians to town. Events of interest to jazz fans included John Cale, the Antonio Forcione Quartet, bluesman Michael Messer playing on a paddle steamer on the Norfolk Broads, and R&B singer James Hunter gigging in the Spiegeltent. Three events in particular showcased the breadth of the jazz component of the Festival—Camille O'Sullivan, Jason Yarde's Trio WAH! and guitarist John McLaughlin's band 4th Dimension.
The performance by McLaughlin's 4th Dimension was one of the most eagerly awaited events of the Festival, as evidenced by the full house at the Festival's largest venue, the Theatre Royal, to welcome the band. The four musicians are seriously talented individuals, and as an ensemble they were tight and intuitive. McLaughlin himself, looking far younger than his 68 years, took center stage with drummer Mark Mondesir to his right, keyboard player and percussionist Gary Husband to his left and bassist Etienne M'Bappe to the rear, close to Mondesir. M'Bappe provided an unusual visual highlight, playing some numbers while wearing with a pair of gloves, others with a single glove on his left (fretting) hand alone. The band featured tunes from its 2010 album To The One (Abstract Logix)—the funky "The Fine Line" proved to be one of the hits of the night thanks especially to Mondesir and Husband's percussion work—but also delved into the McLaughlin back catalog for numbers such as "The Unknown Dissident," "Raju" and "Nostalgia."
The group played a single 150-minute set, plus encores. While each player undeniably demonstrated note-perfect playing, a listener seldom sensed that the band members were stretching themselves or that they were connected emotionally with the music. Not that this curious, unemotional detachment seemed to bother the vast majority of the audience—the crowd's response was overwhelmingly positive.

Jason Yarde's Trio WAH! offered a contrasting musical experience a few days later at the Norwich Playhouse, a smaller and more intimate venue than the Theatre Royal. The trio first played together in the late-1990s, but it has yet to release an album and in fact performs together relatively rarely—given the demand for the players across a host of other projects. Composer and leader Yarde (pictured) plays alto and soprano saxophones with a real warmth and humanity. The entire performance was characterized by an emotional involvement and an element of risk-taking and adventurous improvisation—so that while things did not always go according to plan, the band's creative spirit remained high. 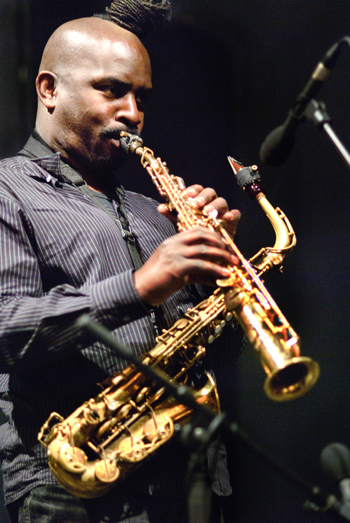 The threesome opened with "Unison," a tune written by Yarde for Louis Moholo-Moholo. "Wanderers" followed, building around the emphatic bass playing of Larry Bartley as Yarde and drummer Mike Pickering very gradually built up the intensity and aggression of their playing before returning slowly to calmness. "I Miss the Sun"—taken from Yarde and pianist Andrew McCormack's My Duo (JoY aNd EaRs, 2010)—exemplified the hypnotic and at times almost moody, ambient feel of the performance. This was an involving set of tunes from a trio that deserves wider recognition—Bartley was in particularly fine form, playing precise bass with a funky edge.

Irish singer, storyteller and performer Camille O'Sullivan mixes jazz and cabaret with a stunning stage presence. She combined the humanity and warmth of Trio WAH! with a fine sense of drama and, backed by a tight quartet of musicians who were also willing and able to get involved in the theatrics, she created an exceptional show. As the house lights went down, O'Sullivan entered the auditorium and quietly walked towards the stage, gently ruffling the hair of audience members as she moved. On stage—which was furnished with a table and chairs and festooned with a hanging collection of evening gowns and cocktail dresses—she delivered two mesmerizing sets of songs with a dark and at times threatening edge.

This is a singer who is not afraid to tell her audience about the down side of life and love—and to do so by selecting some of the greatest left-field songs of the last 50 years. O'Sullivan opened with Jacque Brel's "My Death" and moved quickly into David Bowie's "Rock and Roll Suicide," Nick Cave's "Little Water Song" and Brel's "Amsterdam" with its tale of lonely and lost souls. Only one song was genuinely upbeat—Kirsty MacColl's "In These Shoes," which tells a humorous story of mild sexual deviance. By contrast with her song choices O'Sullivan herself is witty and light-hearted, which makes her selection of songs of such gravitas even more effective.

For much of the second set O'Sullivan's face was deathly white—she applied the make-up herself after the first song—as the songs grew progressively darker. Trent Reznor's "Hurt" and Cave's "God is in the House" were especially beautiful while Tom Waits' "Misery's the River of the World" had a real sense of menace. O'Sullivan closed the concert with another Cave composition—"Ship Song"—a spectacularly affecting performance of this lovely, sad and haunting song.

As the number drew to a close, O'Sullivan left the stage, still singing, and walked into the auditorium. Her band members followed until only the pianist stayed on stage, the remaining musicians singing the final chorus as they, too, walked slowly into the darkness. The entire performance was a masterclass from a singer and performer of genuine star quality. Inventive, exciting, moving and challenging by turns, O'Sullivan and the Norfolk and Norwich Festival have a surprising amount in common.