The Snape Proms, held each August in the beautiful Snape Maltings in the east of England, once again featured a strong and varied selection of jazz concerts in its program. The Ronnie Scott's Jazz Orchestra, the Neil Cowley Trio and Courtney Pine's sextet were just three of the acts to grace the 830-seat concert hall, drawing full houses and demonstrating the diversity of the British jazz scene.

The Ronnie Scott's Jazz Orchestra, under the direction of clarinetist Pete Long, delivered an upbeat evening's entertainment featuring the music of Duke Ellington. The 16 piece Orchestra takes its name from Ronnie Scott's Club in London and draws its members from among the best mainstream jazz players in the UK—this is a vibrant, confident unit that oozed enthusiasm and enjoyment, both of which transferred readily to the capacity audience.

The show was kicked off by the Orchestra's rhythm section which opened appropriately enough with "Rockin' In Rhythm." Section by section the rest of the Orchestra took to the stage and joined in, with the higher-register playing of trumpeter Alex Maynard making an immediate impact. After such a high-energy opening things calmed down as Long introduced one of Ellington's earliest compositions—1914's "Soda Fountain Rag" performed solo by pianist Don Innes. His short performance was one of the highlights of the evening: a sprightly and joyous tune.

Vocalist Georgina Jackson joined the musicians for a selection of songs including "I Let a Song go Out of My Heart" and "I'm Beginning to See the Light." Jackson has a strong and expressive voice that worked beautifully with the big band sound of the Orchestra. Long's introductions ensured that the audience learnt something of the background to the creation of the tunes, with the story of Billy Strayhorn's final composition, "Blood Count," being particularly affecting.

The set was well-balanced between the familiar—"Take the A-Train" and "Satin Doll"—and the less familiar, including Strayhorn's lovely "Snibor." The Orchestra's finest performance closed the first half of the evening—"Jack the Bear," with Jerome Davis taking the double bass part made famous by Jimmy Blanton and leading a storming version of the tune that also featured standout solos from Nathan Bray on muted trumpet and Alistair White on trombone.

The show closed, rather incongruously, with the Orchestra singing "Goodbye," a song by pianist and comedian Dudley Moore made famous by Moore and his comedy partner Peter Cook in the 60s. It was fun, but it wasn't Ellington. 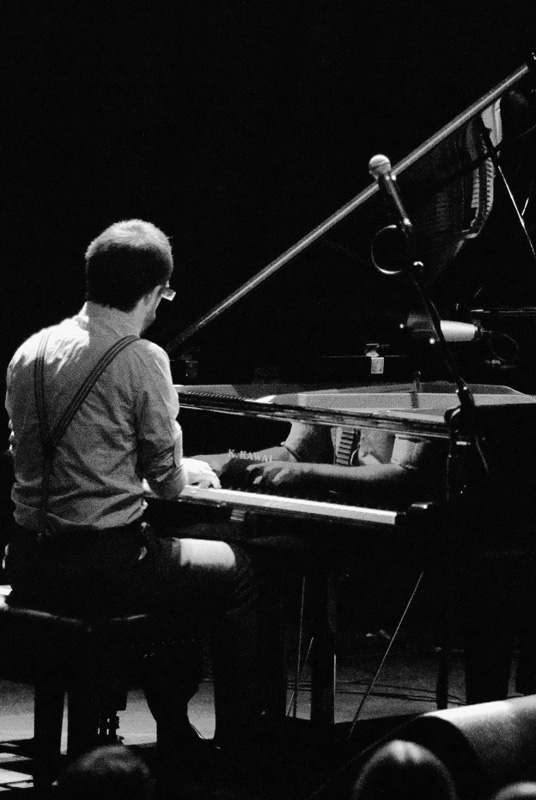 In comparison to the Jazz Orchestra, the Neil Cowley Trio looked rather lost on the huge Snape stage, but they soon showed that they could match the Orchestra in the fullness of their sound and the energy of their performance. The Trio played tunes from all three of their albums, in particular from Radio Silence (Naim Jazz, 2010). This was a tight, energetic, performance that ably demonstrated the talents of all three musicians. Sadly, for much of the performance a sound imbalance meant that Evan Jenkins' drums tended to overwhelm the others: Richard Sadler's bass was particularly badly affected.

While Sadler stayed relatively static while playing pianist Cowley and drummer Jenkins were much more physically demonstrative—by the end of the concert Cowley was particularly animated, leaping up and down as he played. The Trio's set moved between up-tempo dance grooves and slower, more reflective ballads. The beautiful "Box Lily," from Radio Silence, was a high point—it's dedicated to Cowley's young daughter and his performance was emotionally compelling. Of the more upbeat tunes "Hug the Greyhound" and "Gerald" were especially successful. Both were played with obvious enthusiasm by the musicians and their dance beats were rapturously received by the crowd. The jagged rhythms of "She Eats Flies," one of the few tunes in jazz to be inspired by a spider, also worked well in the live setting, with Sadler's bass glissandi sounding other-worldly in the space of the concert hall.

The Trio's music is rich in melody and musical hooks. The band is not given to solos—nor to much improvisation—an approach that has led to criticism from some quarters of the jazz media. This approach may be more akin to rock than to jazz, but it leads to crisp and entertaining sets from the band, immediately accessible even to those unfamiliar with Cowley's music. 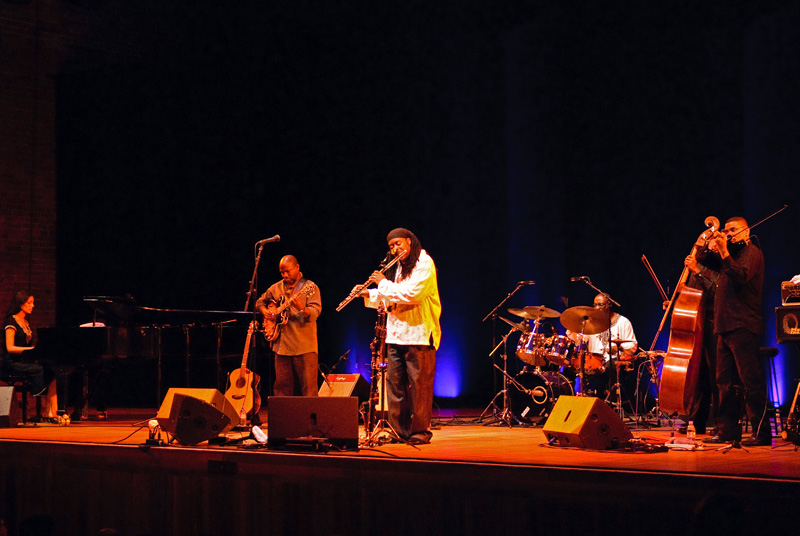 Courtney Pine's sextet delivered another high energy evening of entertainment centered on Pine's exceptional horn playing. The evening was billed as a tribute to Sidney Bechet, but in his first on-stage announcement Pine made it clear that it would be much more than this.

Pine, like Cowley and Long, is an entertaining front man. He's a lover of jazz who successfully projected that love from the stage. At times his enthusiasm created a tendency to be too repetitive in his solos, but this was balanced out by his bandmates whose own solos were equally expressive and energetic while being a little more economical. Pianist Zoe Rahman was impressive as always, her solo on Pine's "The Tale Of Joe Harriott"—dedicated to the influential free jazz saxophonist—was notable for its variety and expressiveness. Cuban violinist Omar Puente was rather underused, but his solos were melodic and intriguing, especially his extended workout on another Pine composition, "The Sound Of Jazz?"

Pine swapped between bass clarinet, soprano saxophone and flute during the performance and showed his mastery of each instrument. His technique is stunning and he seems to have almost total control of his breathing: as a result Pine can play long, intense and complex solos one after the other and still have plenty of energy to skip and dance around on the stage. 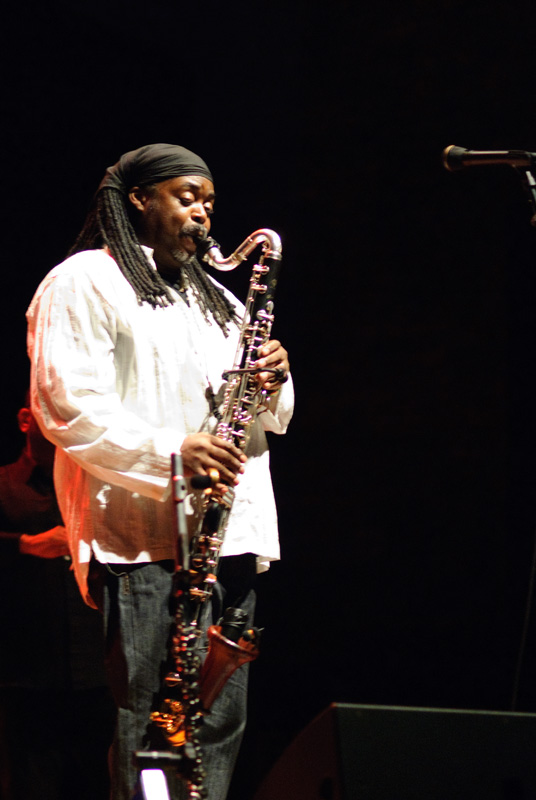 "Creole Swing," a composition inspired by Creole cooking, according to Pine, showed his soloing ability to its best advantage. Pine played bass clarinet on this tune and delivered a long and inventive solo on the instrument, referencing "Summertime," "Air On A G-String," "Whistle While You Work" and "God Save The Queen"—the UK National Anthem, not the Sex Pistols' punk classic—among others, all the while making such joyous and excited noises that the bass clarinet sounded like a happy elephant on a picnic.

By the end of the evening he had also persuaded and cajoled the Snape audience to get up and dance themselves. After a discussion with the crowd about how many times we could leap into the air he led the hall in a spirited and successful attempt to beat the band's previous record for the most consecutive jumps completed by an audience in one go—the Snape audience's apparent achievement of 200 jumps doubled the previous record, if Pine is to be believed. The happy, if slightly exhausted, audience members made their way home reflecting that Pine's brand of jazz, at least, is good for the body as well as the soul.