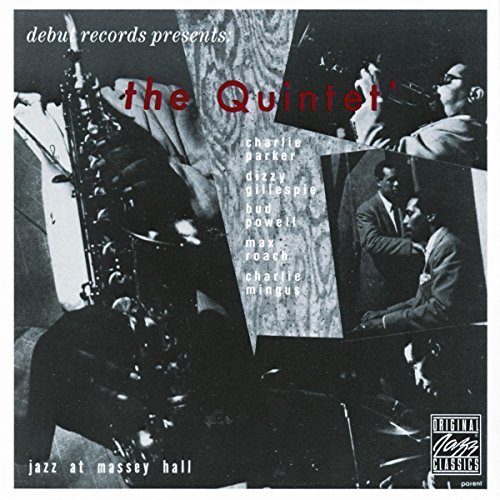 A new shine on old shoes...

Few recordings can boast the deep lore of Jazz at Massey Hall. It has a long and storied history deserving of a bit of review. In 1953, Modern Jazz or Be Bop, had crested and settled into the established mainstream rather than the cutting edge movement it had been in the early 1940s. Jazz as a style collective had begun to fray and Be Bop yielded to a variety of styles all considered reactions to Be Bop's frenetic, nervous nature. All of that said, on May 15, 1953, in Toronto's Massey Hall, Be Bop in all of its brilliant invention was alive, well, and in charge. Sponsored by the New Jazz Society of Toronto, the program brought together perhaps THE five principal architects of Be Bop: Dizzy Gillespie, Charlie Parker, Bud Powell, Charles Mingus, and Max Roach.

The story surrounding these recordings is an improvisation worthy of the improvisers. The New Jazz Society of Toronto originally tried to contact Bud Powell in New York City to headline a gala concert but was unable to locate him because of his current admission into Bellevue Hospital for one of his numerous psychiatric tune-ups. At the time, Powell had every bit the cult following Parker had and the Society was most interested in having him perform. The Society next tried to find Dizzy Gillespie with no luck and finally was able to contact Charles Mingus, who ultimately contacted Gillespie, Charlie Parker, Max Roach, and Powell's manager, Oscar Goodstein. That being done, the concert was scheduled.

The day of the concert was ominous. The New Jazz Society of Toronto had provided for only five airline tickets for travel and The Quintet had grown to a septet that included Mingus' wife Celia and Oscar Goodstein, into whose authority Bud Powell was to be released from Bellevue. Gillespie and Parker decided to remain in New York to catch a later flight. When the two leaders arrived at Massey hall, they discovered a partially filled house, bolstering the fact that The Society had not sold enough tickets to pay the musicians after wards. Instead, the Society offered the musicians tapes The Society had made of the concert.

Armed with only the tapes of the concert as capital, Charlie Parker approached Norman Granz, whose label, Verve, had Parker under contract and offer the tapes to him for $100,000.00. Granz declined. The Quintet, as they have come to be known, decided to release the concert on the recently formed Debut Records. Charles Mingus and Max Roach founded Debut Records as a means for jazz musicians (namely Mingus) to have more creative control over recording and distribution. The Toronto concert put Debut on the map and established a positive cash flow for the label.

The best that can be said for the actual recording of the concert is that it was a mess, both in sound and release policy. The show was recorded from the Massey Hall public address system, which was substandard, even by early '50s standards. This resulted in Mingus' bass being lost in the ground noise, particularly the very low notes. To compensate, Mingus overdubbed his bass parts for all of the quintet pieces and a couple of the trio pieces at Rudy Van Gelder's New Jersey studios. Charlie Parker was credited on the album sleeves as "Charlie Chan," a clever juxtaposition of Parker's name with his wife's name, to avoid contractual difficulties with Verve. Once assembled, the concert was released on three 10-inch LPs.

That brings us to the present when Jazz at Massey Hall has (finally) been remastered using the state-of-the-art 20-Bit A/D digital conversion. The results are worth hearing. Mingus and Roach are pulled from the mire and heard better here than in any previous release of this material. While there is a great deal of surface noise remaining, it is thinned and shrunk. Parker and Gillespie crackle in bolts of lightening rather than beckon from the darkness. Sonically, the recording has been improved 150%, thereby improving one of the treasures of the American Jazz Canon.