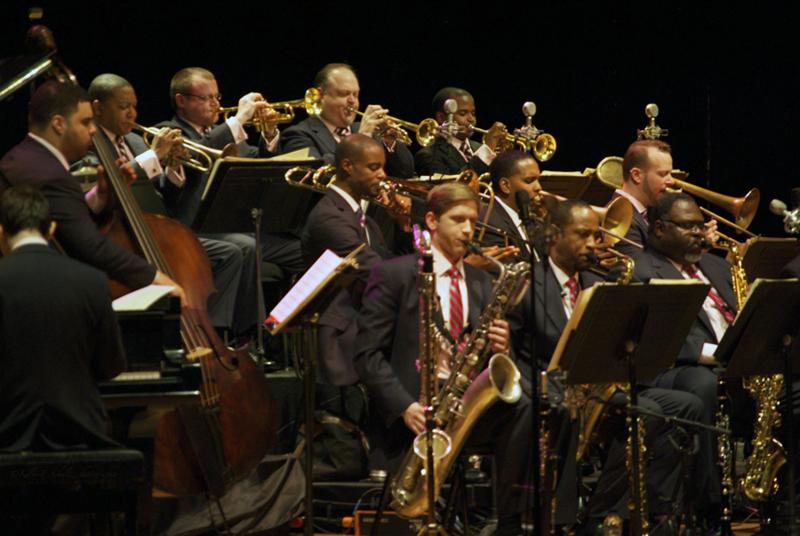 Big Band Jazz never died, it just took up residency on the corner of New Orleans and Chicago.

The Jazz at Lincoln Center Orchestra took the stage at Massey Hall on January 30, 2013 in Toronto, Canada and showed why trumpeter Wynton Marsalis is the modern day Duke Ellington, Glenn Miller and Gerry Mulligan all in one. Marsalis did not hog the stage nor pose himself as the "be all end all" of jazz; he eloquently spoke between songs, called a song audibly here and there, and seemed genuinely humble in what he was doing.

"Jazz can provide musicians and listeners alike with a sense of self, a concept of romance, a more comfortable physicality, a deeper understanding of other human beings. It is an endless road of discovery leading to more maturity and acceptance of personal responsibility, a greater respect for cultures around the world, an invigorating playfulness, an excitement about change, and an appetite for the unpredictable," said Marsalis, and truer words could not have been spoken for what the evening would hold.

Trombone was the featured instrument to start the evening. Chris Crenshaw was featured on his own "The Creation," with each note, key and the passion that the trombonist put into the piece palpable, as was the ebb and flow between his solos and that of saxophonist Victor Goines.

Marsalis crafted his introductions to each piece with such class—never taking stage right and letting the members of the Orchestra take center stage with amazing solos, based on personal compositions to which each member seemed to jive. The interplay between saxophonists, trumpeters and trombonists was tighter than anything this side of Charles Mingus running the ship, paying tribute to those that came before and not letting ego or style get in the way. Alto saxophonist Walter Blanding's searing, "Insatiable Human" blew the doors off the static self-contained sound that might normally be expected from a jazz orchestra.

Truly it was a night for trombonists. Guest Ron Westray took the stage at Marsalis' urging, and blasted off into an off-the-cuff solo that not only exhausted the audience but probably would have made Kid Ory quite happy. With equal parts Dixieland, modern jazz and the structured sound of an orchestra, Westry took the sound to a completely new level.

During the second set, [email protected] paid homage to saxophonists Joe Lovano and Gerry Mulligan, playing modern pieces put to the sound of, without a doubt, the best jazz orchestra in the world. Not only should Marsalis be proud of what he has created and attained but, as music lovers, we need to realize what we have right there in front of us.