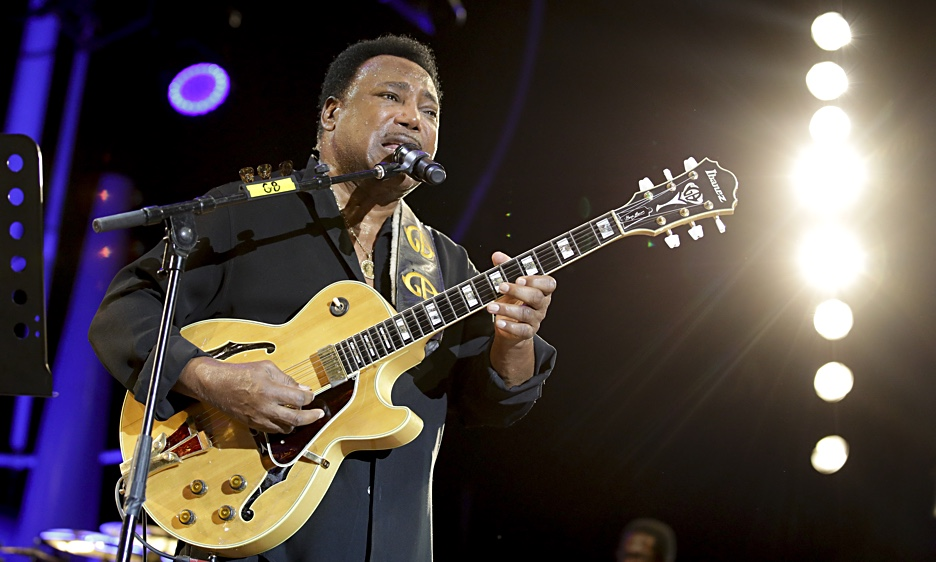 Jazz at Juan-Les-Pins has always been the boutique quality jazz festival of the South of France. The stage beside the blue Mediterranean Sea, was open-backed leaving a view through to the sunset over the Bay of Angels. The audience of 3,000 was all seated in bleachers. Live big screens showed the detail of performances. This year 2019, is the 59th edition of Jazz a Juan, on the Côte d'Azur.

As the sun went down on the opening night, the lights came up on the Steve Gadd Band. They led off with "Where's Earth?" which began with three notes repeated on the keyboard by composer Kevin Hays and was picked up by the guitar of David Spinosa. This is a track from Steve Gadd Band (BFMJazz, 2018) which won the special category Grammy award for the best contemporary instrumental album, 2019. Next, they played "The Long Way Home," which was written by Michael Landau. Trumpeter Walt Fowler looked relaxed sitting on a bar stool and unhurriedly changed to flugelhorn to play to-and-fro with the guitar. "Green Foam" is a band composition which included more expressive trumpet work from Fowler and short, fast rhythm changes from Gadd, leading back to a subtle blues guitar solo. Jimmy Jackson wrote the next tune "One point five" and started the Latin rhythm on the electric bass. Walt Fowler dedicated the following tune to an absent friend. "Dukes Anthem" was a slow, reflective blues, brushed along gently by Gadd. The band played out with "Way back home," Gadd used two brushes in each hand. Hays had moved to the piano, and after some delicate solos from guitar and trumpet, Hays built an extended solo to a crescendo in which they all came together to finish the tune and their performance. These masterful jazz musicians and composers calmly presented their strongly blues-oriented music with the rhythmic guidance of Steve Gadd.

After a short break, George Benson came to the stage with his band. Standing up in his black outfit Benson started the performance playing an Ibanez GB 30 series guitar, which bears his name. He included a fast and inventive scat section. Self-taught, Benson uses a Gypsy jazz rest stroke technique, which punches out the stronger, rounder notes for which he is known. "Love x Love" revealed his voice still strong and true, followed by "Nothing's Gonna Change My Love For You." Benson recalled his first trip to France with the Lionel Hampton Orchestra, then started on the timeless Nat King Cole classic "Unforgettable." Benson's long history in the industry has left him with a formidable songbook, including collaborations with Quincy Jones who produced "Give me the Night." That followed his most successful LP Breezin' (Warner Brothers, 1976) which won a Grammy for the title track and also for "This Masquerade" which suited his voice so perfectly that it opened up his singing career. Benson worked hard, and the soul songs flowed freely, "Feel like makin' love," "In your eyes," and more great music floated off into the night.

Next day Sunday 14 July, was Bastille Day in France. Jazz at Juan has a long-standing partnership with the Red Sea Jazz Festival in Eilat, Israel. This year, the partnership led to a performance by classically trained pianist Omri Mor. Mor's music has elements of the music of Andalucia related closely to the Moorish North African traditions of Chaabi, which includes the use of Qakabeb, large double-headed metal castanets. Drummer Karim Ziad replicated the flat metallic clatter by striking two loosely mounted cymbals. Playing in unison with excellent bassman Michel Alibo, Mor developed a sophisticated Arabic theme in his composition "Jerusalem." This was not the Gypsy music of Andalucia, which has its roots in India. The music of Morocco and Algeria is the Chaabi of souks, weddings, and festivals, it came to Spain during the 800 year occupation by the Moors. It is folk music with a melancholy longing woven into the sound. Mor played a solo piece "Metamorphoses" presenting his smooth interpretation of Arabic music.

The next partnership was with Shanghai Jazz Festival, China, who sent singer and guitarist Ekram accompanied by musicians on piano, bass, drums, and violin. Ekram is a tall man belonging to the minority group the Uyghur (pron. we-gur) from the North West of China. Their history traces back to Turkey they are consequently a Sunni Muslim people. Ekram sang storytelling folk music evincing yearning themes. The stories went unnamed, but the music contained deep emotional sentiments holding a single syllable over several differing notes in melismatic singing. Ekram shared their jazz credentials by playing a straight-ahead composition, including Grappelli-style violin. What thoughtful programming by Jazz a Juan to present two musical groups from Israel and China both interpreting Arabic music in their own way. Ekram suggested, "Music comes from religion." Sometimes it does, consider the effect of African American church Gospel music on George Benson's soul sounds.