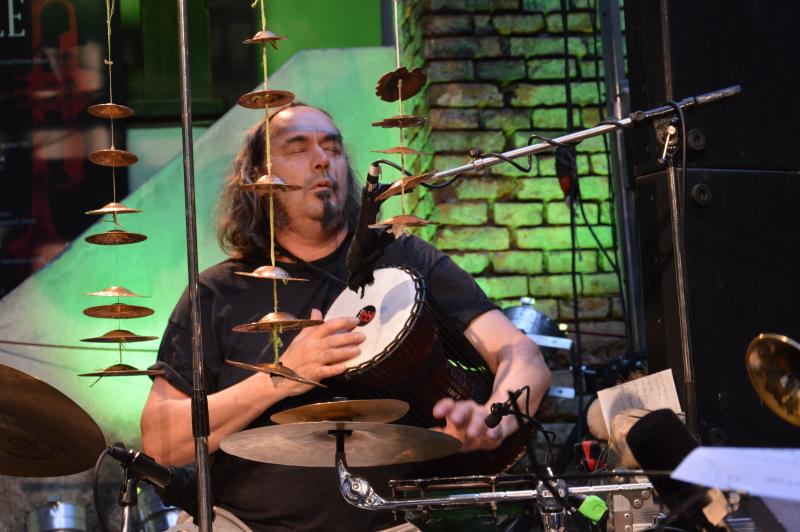 The castle located in the heights of the Transylvanian Carpathian Mountains known as the dwelling place of the legendary Count Dracula has hosted the second edition of a jazz festival that ushered in a new type of record: the most visited castle in the world- -toured each year by well over half a million tourists—for three days became the scene of a quite intimate event accommodating an audience of a mere hundred. The tall, stony yard, surrounded by high balconies and turrets, offered the perfect acoustic setting for an exquisite musical experience. The lineup, featuring mainly top-ranking representatives of Nordic Jazz, brought together musicians of diverse stylistic coloring, combining in a well- balanced proportion the traditional and the contemporary modes of musical expression. The artist in residence for the whole time of the festival was the drummer and percussionist Paolo Vinaccia.

The trio of saxophonist Trygve Seim, Andreas Utnem, piano and harmonium, and Paolo Vinaccia on drums and percussion opened the festival on a serene note that carried along the murmur of the deep Carpathian woods, the quiet tide of the Nordic sea, and the echo of ancient chant. The sax line grew with a pensive breath sustained by minute percussion touches. The piano carried the theme in high intervals induced by the long sax innuendos. While the engulfing drum work developed bass amplitude, the sax unfolded its Nordic chant in long ribbons of sound, coiling around the quiet piano chords. Seim's piece "Breathe" deepened the meditative stance as the hieratical insertions of the harmonium increased the solemnity of the recitative. The amplifying percussion touches of wood upon wood recalled the ancient pastoral tradition and summoning sad songs of longing, enlivened by the whirls of a waltz. The calm fusion of the instrumental lines carried the theme into a minor register; the ballad became a hymn, then a whisper to end in a sigh.

The evening went on featuring trumpeter Palle Mikkelborg, with Carsten Dahl on piano, Helen Sherrah-Davies on concert harp, and Paolo Vinaccia on drums and percussion. The performance of the quartet was similar to a quiet induction into the realm of spirituality. The trumpet left the whispered piano theme in pure verticality to fall back in velvety rounds, embraced by the inflow of the harp chords. The melodic fusion if the trumpet's firm tone and the liquid harp vibrations resulted in an osmotic harmonization that sustained the ethereal texture of the sound. The pianist's "loose chords" effect created a scintillating spatiality backed by dramatic crescendos of the trumpet, in full command of tension and mood. With the percussion on the piano chords, pierced by the high trumpet accents and intersected by the drum work, the soundscape developed into a confluence of sounds, mixing a New Orleans flavor with free jazz sequences and aloof Miles Davis sound islands.

The second day opened with a concert at the Evangelic Church in Rasnov performed by Trygve Seim and Andreas Utnem. Suave organ tones joined by the sinuous sax line grew in subtle progression to reach hymnal intensity. The soaring instrumental lines ascending in airy legatos merged in pure spirituality sustained by the well-timed pauses, and the lasting silence. A new register engaged the instruments in a supple dialogue, powered by melodic sax inserts and by the rich harmonic support on the organ, fading again in a profusion of colorful sound flakes. The last tune, in registers similar to the Armenian duduk—leading back to the secular substance of the world music heritage— merged sacred tonalities with well-placed jazz accents, ending the show on a high, celestial note.

The guitarist Paolo Angeli, on prepared guitar, opened the second evening with a performance of disarming directness and profound musicality. The musician filtered the classical tradition and the Sardinian musical heritage, deconstructing it into raw sounds in order to reconstruct them in a renewed form. Shreds of sound and rhythmical particles were dissipating into the chilly night to reassemble gradually in patterns of crisp melodic coherence. The use of the bow lent the performance an elegant cello vibe which, backed by the percussion devices, acquired a note of paced gravity. The bow, hitting or striking the double set of strings, generated a dynamic balance in which the playful rhythm alternations and field transpositions reached perfect concord. The traditional vocal pieces marked by the specific voice modulations were lending the soundscape a robust Mediterranean coloring.

The performance of Switch (2014, OKeh Records)—Nils Petter Molvaer's most recent project with Geir Sundstøl on steel guitar, Jo Berger Myhre on bass, and Erland Dahlen on drums—created an atmosphere of gentle alertness, tempered by the introspective drifts of Molvaer's trumpet into the realm of a reverie. The modulations on the steel guitar added a note of languid smoothness to the trumpet's melodic excursions, which were enveloped by the rhythmical halo of the bass-drum section. The deep roll of the drum and the multilayered accents on the toms and bells were complemented by the gliding loops of the steel guitar, backing the trumpet's solitary tones, which rose in sound clusters coagulating around the nascent melody. Immersed in a song of diffuse consonance, ebbing into the abstract, the trumpet opened up a world of tone shadows meant not to obscure, but to reveal, its full dreaming potential.

On Sunday, bandoneon player and pianist Daniele di Bonaventura, together with trumpeter Mathias Eick and drummer Paolo Vinaccia, made up a trio of complete musical interaction, enclosing the mediaeval castle in a translucent sphere of melodiousness. The show started with hand percussion and was gradually joined by the wide, solemn respirations of the trumpet. The elaborate drum groove rose like the wind in the trees, receding then like the rush of the sea at dusk. As a tango unfolded its languorous turns in the flowing whirls of the bandoneon, the trumpet increased its intensity to fade away in soft whispers. Albinoni's "Adagio" released the whole lyrical potential of the trio. The sound of the trumpet rose in dusty tones carried by a poetic undercurrent, expanding the majestic gait of the theme.

Accordionist Vincent Peirani, together with saxophonist Emile Parisien, closed the festival with pieces from the album La Belle Epoque (Act, 2014). Fluid interference in the instrumental lines led to a smooth tone convergence with gliding accents. "Egyptian Phantasy" opened on a repetitive accordion sequence, offering a brisk sound layer for the saxophone's ascending line, falling back onto the harmony and revealing the duo's richness of register and modulation. In the alert "Temptation Rag" the accordion's deeply resonating fulgurations took on a polka pace ,adding a humorous touch to the piece. "Song of Medina" brought a radiant theme with Oriental touches, exotic scents and lucent veils reflecting the crescent moon above the Castle of Bran.