Jazz and Theatre: A Review of “Miles & Coltrane: Blue” 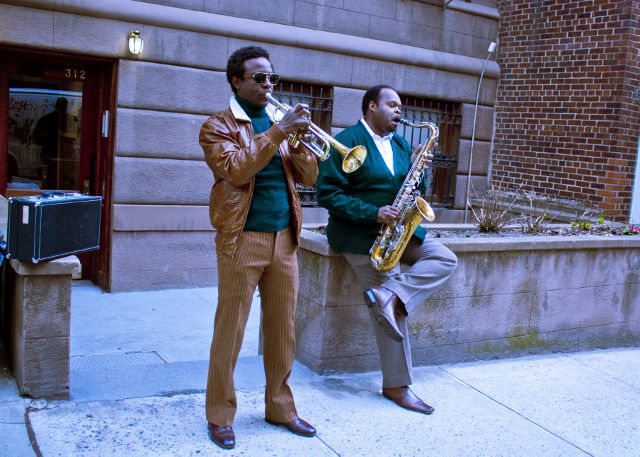 By K. SHACKELFORD
May 19, 2015
Sign in to view read count
When trying to understand the rise and phenomenon of jazz music in the 1950's and 1960's, understanding the life of the jazz musician is equally important. Many of their stories illuminated heroic musical genius birthed out of pain, hope, and a charged political ethos. The play Miles & Coltrane: Blue delivered a snapshot of this experience through the lens of jazz icons Miles Davis and John Coltrane. It was recently performed at The International Civil Rights Museum in Greensboro, North Carolina.

Both Davis and Coltrane regarded their music as more than melody, harmony, and toe-tapping rhythm. It was a "cosmic language," a gift, filled with mystery. During their careers they also negotiated the social problem of racism and oppression of the day. The play probed what Bryant Keith Alexander calls, "the borders between the practiced positionalities of race, sex, and gender in specific spaces of cultural practice and identity location." The sociological connection between jazz, race, and black masculinity was nicely explored. In multiple interviews, Davis spoke about race matters as with Don DeMichael in 1969 for Rolling Stone Magazine, and in 1989 with journalist Harold Reasoner for CBS news program 60 Minutes.

With a combination of intensity, humor and wit, the musicians, on stage, shared their deep and riveting passion for music. Davis proclaimed his love of music with emotional anguish as such, "like outta everywhere I'd ever been I belonged wherever them notes was... I was supposed to follow those notes wherever they would take me and they were gonna follow me wherever I went... it was like meeting a part of you for the first time."

Miles & Coltrane: Blue also dealt with jazz and its drug culture. The play didn't shy away from Davis and Coltrane's problems with drug addiction (and other temptations in life), providing a fiercely honest account of their struggles. However, it was clearly highlighted that even though drugs gave them a similar "high" as music, their addiction and affection for jazz superseded anything else. By the end of their careers, both musicians kicked the habit.

These continuous moments of raw self-disclosure garnered a bond of sympathy, and a shared sense of introspection between the audience and the entire cast.

The portrayals of Davis and Coltrane were stellar with a unique éclat. Sultan Omar El-Amin, who played Miles Davis, captured the cool "raspy" whisper-like characteristic of Davis' voice, and his no-nonsense demeanor.

Coltrane's tenderness and humility was emanated through Quentin Talley's performance. Yet, Talley also captured the psychological inwardness of Coltrane, particularly, the tenacious fight with his personal demons. The play's narrator, Mason Parker, also provided important commentary that helped audience members with little to no background about the two musicians navigate through the scenes.

In addition, Miles & Coltrane: Blue made clear the spirituality of the two, especially Coltrane, whose conversion experience was the impetus behind his iconic album A Love Supreme.

Scholar and author Scott Saul outlines Coltrane's spiritual conversion experience in his book, Freedom Is, Freedom Ain't: Jazz and the Making of the Sixties. He notes that, "Coltrane forthrightly dramatized that blessing with A Love Supreme, his most famous album and a legacy of his 1957 "spiritual awakening," which led him to reorient himself and give up the drugs and alcohol that marked his life since the early 1950's."

There were many lines in Miles & Coltrane: Blue that illuminated this conversion: "Blast out a love for a Creator who loved us enough to make music, You are MAJOR, man! God, man, I know. I know You ain't in no needle. But I couldn't hear You."

Last, the style of Miles & Coltrane: Blue was interesting. On stage, the cast beautifully shifted from poetic monologue and dialogue, as an exhilarating jazz quartet played throughout the entire performance. I never got tired of the music playing in the background and felt that it reinforced, rather than undermined the play. There was even a solo sung by Alice Coltrane (Kendrea Collins) placed into the mix, adding the only feminine voice to the male cast.

This back and forth exchange was the play's cynosure—creating a heightened dynamic of the relationship between improvisation, language and sound. Although, a larger stage would have been a plus.