By DAN BILAWSKY
August 2, 2015
Sign in to view read count 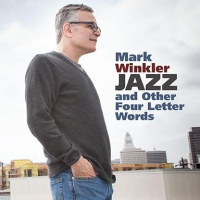 Vocalist Mark Winkler has been something of a victim of his own talent: his work as a vocalist has often been routinely overlooked, largely eclipsed by his renown as a songwriter. But the tide seems to be turning for this cool school singer-of-note. With the critical success and positive public response to The Laura Nyro Project (Cafe Pacific Records, 2013), the arrival of his duo project with Cheryl Bentyne—West Coast Cool (Summit Records, 2013)—and this hipper-than-hip outing, Winkler is finally getting the attention he's due for his vocal gifts.

For Jazz And Other Four Letter Words, Winkler gathered a group of the West Coast's finest musicians, contributed some winning material co- written with a variety of strong writers, and pulled together classics and off-the-beaten- path material from a diverse crop of A-list songsmiths—Paul Simon, Sir Richard Rodney Bennett, and Rodgers and Hart among them. As per Winkler standards, smart lyrics, vocal warmth, and a sure sense of phrasing inform the music. His voice gently floats atop bossa nova beats ("I Never Went Away"), emphasizes twilit notions ("I Chose The Moon"), moves from center stage soliloquy to swinging environs with nary a problem ("In A New York Minute/The Great City/Autumn In New York"), and delivers his own stylish lyrics with the requisite understated charm.

The exceptional crew than joins him here includes bassist John Clayton, drummer Jeff Hamilton, some lesser-known but solid players, and very notable here-and-gone guests—trombonist Bob McChesney, guitarist Larry Koonse, saxophonist Bob Sheppard, and Bentyne included. But the most important figure here, save for the singer-writer himself, may be the primary pianist on the album—Jamieson Trotter. He arranged eight of these eleven songs, shaping the music to perfectly compliment Winkler's vocals. He puts together a sly, (mostly) swinging-in-five setting to support Winkler's riffing about everything from Charlie Parker to Charles Ives to Pete Rugolo ("Your Cat Plays Piano"); he strips things down to guitar and piano backing for a visit to a Gershwin favorite ("Nice Work If You Can Get It"); and he takes a casual-turned-driving approach to a Paul Simon number that flies high with a warp speed McChesney solo spot ("Have A Good Time"). Trotter and Winkler prove to be a match made in heaven and this album is a true gift. It sounds great right off the bat and seems to get better with each listen.