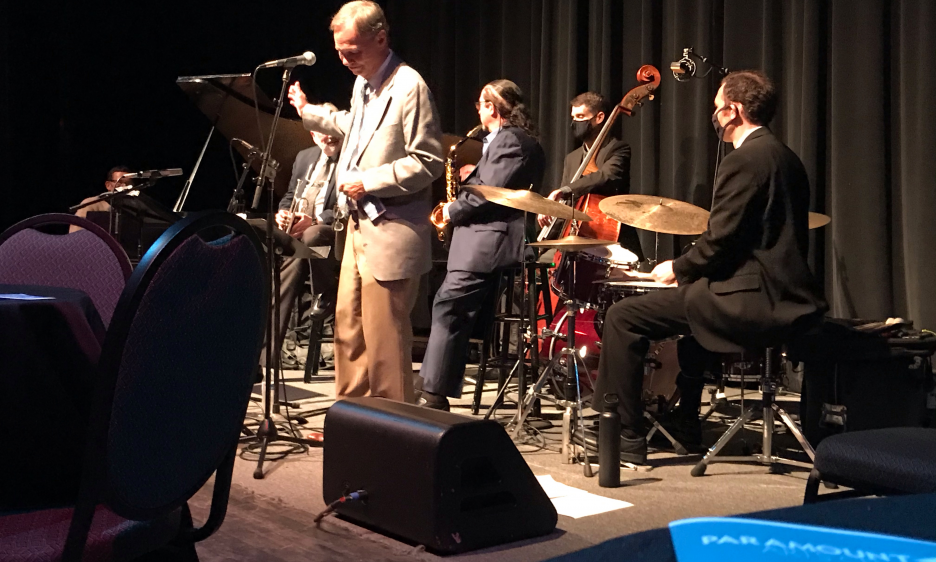 It is perhaps poetic that the PAC, designed to showcase the silent films of Paramount Studios, now hosts not only musicals, plays, and rock concerts, but also— every summer—live jazz, crossing genres and planting its flag in new soil.

Jazz has a way of insinuating itself where it was not wanted, planned for, or easily accommodated. Or, as film's Dr. Ian Malcolm (played by Jeff Goldblum) described life's stubborn imperative to survive and thrive in Jurassic Park, it "finds a way."

Hall went from making suggestions for programming at Paramount, as a season ticket holder, to serving as chairman of Paramount's entertainment committee. "I thought 'I'm not seeing any jazz coming through here,' so I said, 'we need to do something for jazz.'" That "something" has grown from encouragement to "put something together and we'll see what we can do" ("we were really just trying to stay alive," says Hall) to a six-show annual concert series, spanning the jazz repertoire from New Orleans traditional to hard bop to Brazilian-influenced jazz acts.

Much about Jazz Alley at the Paramount, from the lamppost sign that seems at home in the French Quarter to the way the music is presented, reflects Hall's influences and tastes. "I spent as much time as I could in New Orleans, because of the music," Hall says. "I got to know some guys down there. I started telling them about what we were trying to do: the attitude was 'if we can help you let us know.' So I said 'yeah you can.' So for a number of years now we've had at least one, if not two of our shows from musicians out in New Orleans."

Among the acts on last year's bill were the NOLA String Kings—New Orleans mainstays John Rankin, Matt Rhody, and Don Vappie. Vappie's visit to Ashland came during an especially fruitful period for the banjoist: he was honored with the Steve Martin Banjo Prize in October 2021 and will be inducted into the Banjo Hall of Fame in September 2022.

"Frankly, it would be easy for me to bring up four, five, six quartets or trios from New Orleans and hear that New Orleans-style jazz," Hall says, "And I love it—in fact, it's my favorite, when it's played by New Orleans musicians. But I want there to be a difference, and here's why: people are very reluctant around here to go hear jazz. Most of them say, 'I don't like jazz; I hate jazz.' I've made this guarantee to people: if you come and you don't like it, I'll pay you—not the theater, but me personally—I'll pay you for your tickets. And invariably they'll come and say 'I'm not much of a fan of jazz, but this stuff was really good!'"

Beyond the diversity of style, part of the success of the Jazz Alley program depends on how the historic space at the Paramount is used. Tables are arranged on the Paramount stage, with a small concession area at stage right, musicians at the rear of the stage, and a darkened theater behind the audience on stage. The arrangement creates an intimacy and immediacy that makes the music unusually accessible: a private, after-hours feel that cements the bond between musician and guest. None of this is accidental. Hall's first Jazz Alley program was an impromptu session with twelve musicians. "The idea was to put people on stage and try to make a jazz club." Hall delights at the memory of this moment, where the wall between artist and audience first fell. "We found ourselves talking to the musicians, like we were in our own living rooms!"

"They all enjoyed the way they were treated here," Hall says of his musical guests. "The two main things they all say: they love playing for people who want to hear them play, rather than just being background noise at a restaurant or a bar or a club somewhere. And they love the setting, which includes the sound. And the word gets passed around, and I'll start getting calls in from people that want to stop here and play, and I'm thinking of ways to kind of expand what we do. But I have to be mindful that having a hundred people show up for an intimate show—for me, that is an intimate show—from a trio or a quartet or whatever... is not going to keep the lights on at the Paramount. I understand that. On the other hand, to hear that kind of music in that kind of setting—people just don't get that opportunity every day."

Since the Jazz Alley series is scheduled during the months of June, July, and August, Hall is unusually successful at attracting jazz faculty from colleges and universities, who have more time in summer months to play gigs. Having educators participate in the series is crucial to Hall's mission of spreading the jazz gospel. "They discuss the music with us, which, to me, is as important as what they are playing—we get to learn something about it."

The Paramount Arts Center is a lovely classroom. In it, Roger Hall has assembled some of the country's finest teachers.