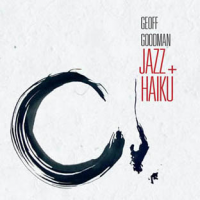 On the face of it jazz and haiku wouldn't seem to have a great deal in common: jazz, born in the brothels of New Orleans at the close of the 19th century; haiku, an offshoot of age-old Japanese Zen Buddhism, seeking answers to the meaning of life in the quiet life and a pithy observation of nature.

Yet, as he lurched from one dive to another in Storyville, might not Jelly Roll Morton, on occasion, have gazed up at the summer moon and drunkenly applauded the beauty of the world? At very least, he would surely have understood the words of Basho (1644-1694), greatest of all the haiku poets:

At its best, haiku, like jazz, is down-to-earth and universal. At its worst, like jazz in the modern age, it considers itself art and encourages pretension. Guitarist/composer Geoff Goodman steers a sometimes uneasy path between these extremes.

Born in New York, now a resident in Munich, Germany, Goodman has played with the likes of Charlie Mariano and Mal Waldron. His band, Curiosities of Nature, includes German saxophonist Till Martin , who has gigged with Clark Terry, Kenny Wheeler, Harold Land and Herb Geller, amongst others.

Haiku are short and to the point, comprising just 17 on (phonetic units). These are usually, but not always, syllables. Accordingly, Goodman has extended and adapted the ones used here.

The opener, "Short Night," by Yosa Buson (1716-1783) is successful on the page but in practice undermined by Fjoralba Turku's sub-Loreena McKennit warblings.

It's the ladies that pose the principal problem here. Goodman's version of Basho's "Sound Of The Wind" opens with a recital in Japanese by Kiyomi, given to dramatic whisperings and occasional whoops. She is joined, quite effectively, by Goodman himself, mercifully speaking English on "Bamboo Children."

Otherwise he sticks to guitar, mostly light and impressionistic but welcomingly muscular on occasion, such as his excellent solo on "The Loves Of A Cat," one of the most successful numbers, with Martin putting in some fine, sensitive work, and Turku's vocal pleasantly restrained.

Like indigestion though, Kiyomi keeps coming back, adding a touch of kabuki to Basho's "Monkey's Raincoat."

It's up and down. "Two Autumns" features some excellent, gently rocking guitar-led ensembles. "Inside A Dream" degenerates into percussive effects, accompanied by ethereal female chanting.

Still, an interesting experiment. One to be greeted by the sound of the clapping of one hand. What else?

Short Night; Sound Of The Wind; Bamboo – Introduction; Bamboo Children; Such A Moon; The Loves Of A Cat; Monkey’s Raincoat; The Holes; Two Autumns; Reprise; Inside A Dream; Cicada; The Sound Of The Bell.