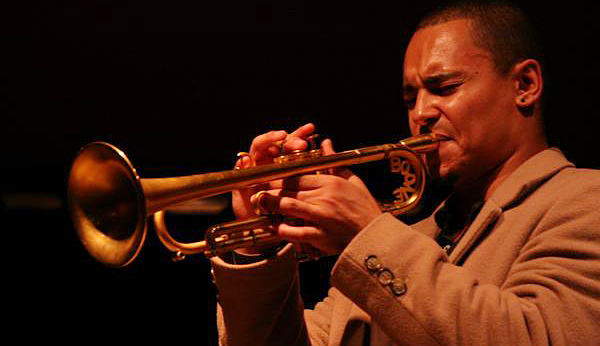 By BRUCE LINDSAY
November 16, 2010
Sign in to view read count
At the age of 28, trumpeter Jay Phelps already has a broad range of musical experiences under his belt, including co-founding the award-winning jazz group Empirical. Releasing his debut album as a leader, Jay Walkin' (Specific Records, 2010), seems like a natural next step. But Phelps is clearly not a man to be rushed. The album title is not just a pun; it also reflects Phelps' considered and studious approach to his own personal musical development. He's a bright, engaging instrumentalist who is constantly searching for more and more musical experiences to help in his development as a player. And he's strong-willed and independent enough to know how to pace it.

Of course, not everything can be planned for, and Phelps knows when to act on an opportunity, which is how he found himself involved in a major project by the internationally renowned British photographer Rankin, in mid-2010. Phelps was one of six young artists selected for the project. Their portraits were exhibited not in a gallery but on advertising billboards in major British cities. As Phelps explains, "The Rankin experience was nice. I have a friend who knows a casting agent, and that's how I got the gig. It was an early morning thing, and I just had to do what I do, only this time it was down a £30,000 lens. Rankin was cool, nice and easy to work with. Considering the fact that jazz doesn't really get much exposure in the real world, any form of publicity outside the jazz world is great. I don't exactly know what kind of an impact the photo has had on me now, but I do think it will help in my future."

That future looks bright for the Canadian-born musician who, at the age of 17, moved to London from his home in Vancouver. That's a big move for a teenager, and perhaps a slightly unusual one for a jazz-loving Canadian. New York, or perhaps Los Angeles, seems like a more logical place to go, but the move wasn't simply to experience more jazz. Phelps explains: "First and foremost, my mother came to England after marrying a trombone player—Dennis Rollins. He's my stepfather. So at 17, I thought it would be a wise move to come to England and check out the scene." Rollins is a popular and well-known jazz musician:a bandleader in his own right, and a regular member of Maceo Parker's band. When asked if he came to London with his mother, Phelps laughs, "Yes. I still needed my mama's bosom." Indeed, although Phelps' ideas about jazz and his own development clearly come from some serious consideration, he is also self-effacing and quick to see the funny side of things—there's plenty of laughter throughout the interview.

The young trumpeter gained an introduction to much of the UK jazz scene through family connections, and very soon he was part of it himself. "My uncle, Joe Bashorun, he was on the scene—he's now back in Vancouver, I think—he played with Courtney Pine and others, so I knew all the people he knew, and they knew that his nephew was coming to London. So I had quite a few connections before I arrived. ...Pretty soon, I joined Tomorrow's Warriors. I went down to the jam sessions they arranged; then I joined the band. Through that, I met the guys who became Empirical."

Phelps also attempted to continue formal musical education, but this proved a little harder. "I had tried to get into the Royal Academy of Music: I'd auditioned and been given a place, but the overseas student fees I had to pay were too much. So I had to wait a few years, but I eventually got into Trinity College of Music when I was 22. I don't know how it happened, but I managed to get in without having to pay overseas fees, and I graduated with a Bachelor's Degree from Trinity."

Those years between arriving in the UK and entering Trinity College of Music gave Phelps a broad musical education, both formal and informal. "I played in a lot of other bands: ska bands, calypso bands—I spent a month in Trinidad when I was 18—a bunch of pop bands. Really, it was experience of life."

With Tomorrow's Warriors, Phelps was able to play with some of the best young jazz musicians of his generation, and he was lucky enough to meet more young talents at Trinity. "Shaney Forbes, the drummer with Empirical, was in my year, and Lewis Wright, Empirical's vibes player, was there at the same time: a bunch of us 'up-and-comers.'" Empirical formed while Phelps was still a Trinity student, putting pressure on his academic studies: "I had to go back for another year to make up a few classes, so it took me four-and-a-half years to finish school, rather than four."

Phelps appeared on Empirical's eponymous debut album (Destin-E Records, 2007). Then he and keyboard player Kit Downes left the band at the same time, at the end of 2008. Was this simply a coincidence, or did they leave for related reasons? "We left separately; it just happened to be at the same time." The band was poised for great success at the time, so leaving must have been based on strong reasons. Phelps didn't leave to follow a specific path, however: "I didn't leave to do my own thing. In fact, it's taken nearly two years for me to do my own thing. I left to get more education about certain musical things that I knew I wasn't going to get with Empirical. We were going in a musical direction based more on the contemporary scene. Some of the stuff I was trying to do was still in the tradition of jazz music and still is. I feel that my own musical journey is going to take a long time, and I felt that I needed further education within the tradition of the music. I wasn't getting that in Empirical, which was taking a more improvisational approach rather than learning a set of standards and basing my playing on that."

Phelps clearly felt strongly about his need to explore and become skilled in the jazz tradition. He clearly still feels that way too. On his website is the slogan which is used for the title of this interview: "Swing is the new avant-garde.

"I got back from New York last week—I was playing at Dizzy's Club at Jazz at Lincoln Center—and I found that players of my generation are really not playing swing. Now, I grew up loving Dizzy Gillespie, Clifford Brown, Miles Davis—loving that music. It's part of what I want to incorporate in my music. I don't see it as old-fashioned. When I listen to it, I think it's the most modern shit you're hearing. So that's why I say that swing is the new avant-garde, because not many people my age are doing that."

Phelps has credited Davis' Kind Of Blue (Columbia, 1959) as the pivotal moment in his love of jazz. Was it really so important, so crucial? "Yes, it was the pivotal moment. I loved everything about the sound of it. I was a kid of the hip-hop generation: I was listening to hip-hop all the time, big speakers in my room blasting it out. My mother must have wanted to kill me. Now, when I wanted to listen to that album—and it was an album, a vinyl record—I would have to go upstairs, because I didn't have a turntable. The record player upstairs was part of an older stereo system that had a different vibe to my stuff. The clarity and the difference of tonality set it off for me within this album. It struck a chord with me."

Phelps' introduction to jazz was partly by luck, partly through the support of his mother, who paid for his trumpet lessons, and partly through Phelps' high school, Semiahmoo High School in Vancouver. "My mom was always on my case about practicing, 'cause she was paying for the lessons. But I also went to a great high school. I started going to its after school classes, its big band, a year before I enrolled there. Two teachers, David Prosnick and Kevin Lee, they were amazing teachers, and the school won many music awards. So it was a good place to be, and through that school and my mother and my love for the music, it just grew and grew and grew."

Phelps' debut album as leader, Jay Walkin', was recorded when Phelps was 28. This still makes him a young man, but in contemporary jazz terms it almost makes him an unusually old debutant, as many jazz players are leading recordings in their early 20s or even in their late teens. Phelps laughs upon hearing this. While he agrees, it's clear that he waited until he felt the time was right and until he had a body of strong compositions. His original tunes on Jay Walkin' have, in some cases, been around for years. "Yeah, they do vary in terms of when I wrote them. 'Jay Walkin' happened just a few weeks before the recording session, and I wrote it really quickly. It's kinda the quickest tune I ever wrote. 'I Love my Mama' was based on a motif I wrote a while ago. I actually wrote a Christmas song based on the motif—something about Santa. But I eventually changed it to 'I Love my Mama,' probably over the last two years. 'Dose of Aladine' is old! I wrote it when I was about 20. 'Six Degrees of Separation' is another old one—I was about 19 or 20—but I revamped it and rearranged it more recently."

The album also contains some covers. "Blue and Sentimental" is a Count Basie tune that features a beautiful string arrangement—Phelps' first. "I studied arranging at Trinity, but this is the first time I did one for real, conducted and so on. It was a nice little test for myself." There is also a short piece by Tchaikovsky, "Semplice," that Phelps has loved since childhood: "I had it on CD, my first classical CD, when I was 12 years old. It traveled with me to London, and every time I've moved—16 times since I came to London—the CD popped up. I've always loved the second movement, a great little waltz, and I thought it would sound good as a quintet with bass clarinet. It would give it a nice somber feel. I tried to give it an Ellingtonian feel."