By DEREK TAYLOR
February 12, 2005
Sign in to view read count 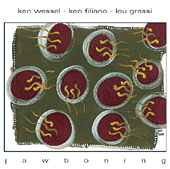 Matriculation from sideman to frontman can be a stressful process. Guitarist Ken Wessel makes the long due move with aplomb. A short string of CIMP dates supporting saxophonist William Gagliardi and violinist Sam Bardfield, as well as a long-standing slot in Ornette Coleman's Prime Time band, solidified the clout. Wessel chose Lou Grassi, his colleague in the Gagliardi group, and the drummer in turn suggested the participation of bassist Ken Filiano.

Wessel's easygoing, unassuming approach jibes well with the conversational colloquialism of the disc's title. He's never averse to taking his time; even when his partners slip into accelerated clips, his patterns have an unflappable air about them. In relative tone and attack he reminds me of a more methodical Joe Morris, circa say Flip and Spike , sculpting nimble chains of nickel-plated notes and spectral tonal slides, usually tagged as quivering codas to the ends of runs.

At first glance Grassi might not seem the best choice for such a date. He's renowned as a muscular, even stentorian drummer, one who crackles with energy, but isn't the best at being bottled by slower, less effusive settings. His work here tosses a stick in the mechanism of that sort of hair-splitting thinking. But he still finds occasional space for his patented tumbling mudslide solos, as during the closing minutes of the title cut, building a frothing barrage of stickplay that Filiano shears into with sharpened bow. The bassist spins his usual pizzicato and arco legerdemain, serving as supple harmonic cantilever and pacing his strings through a strenuous regimen of rigors.

A modest clutch of originals along with a pair of standards caps with a melodically ripe collective improvisation. On "Behind the Mirror"? Wessel shapes soft reverb-coated notes that ripple like windchimes. Filiano's threaded lines are brilliantly cast in resplendent melancholy. Grassi's restraint on small percussion keeps the piece rooted in contemplative reverie, eventually twisting inward into a tightly wound groove built on bent notes and bowed counterpoint. "Sunset"? finds Wessel working out of a lithe fusion orientation with coruscating tonal ornamentations reminiscent of John Abercrombie or mellower Mahavishnu-era McLaughlin.

Saxophonist Chris Kelsey (a fellow CIMP artist) recently stated that he enjoys retooling standards so they sound unequivocally like originals. Wessel adopts a similar tactic, equipping the trio's initial reading of the calcified chestnut "I Remember You"? with an extended preface of floating arpeggios and sliding glisses all rendered with a gelidly limpid tone. "Softly As in a Morning Sunrise"? receives a similar revisionist treatment as the three negotiate a series of oblique harmonic permutations only tangentially tethered to the tune proper. Filiano sets up a whirring arco sawmill and Grassi grafts a choppy ulterior cadence, leaving Wessel to engineer, on-the-fly, one of the best solos of the session.

Creative improvised music is a crowded place these days, with plenty of new players cropping up and older ones jockeying for more prominent positions. With all the activity it's hard to keep track. But based on this auspicious debut my money says Wessel is one to watch.

I Remember You/ Jawboning/ Behind the Mirror/ Softly as in a Morning Sunrise/ Sunset/ Collectivity/ Diminutive Innuendos.