Jason Moran and the Bandwagon at the Kimmel Center 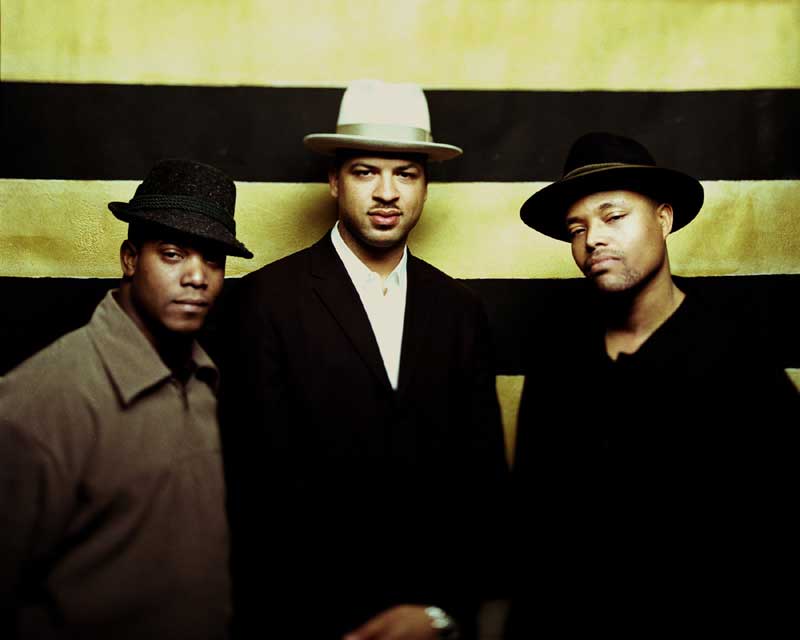 This concert contrasted stylistically with a previous engagement at the Kimmel Center when, in 2007, Jason Moran appeared with an expanded group including horns and a vocalist. At that time, "The group played a diverse pastiche of themes derived from blues, gospel, popular music, and an old cowboy motif found in every Western flick you've ever seen." But in 2010, Moran released Ten (Blue Note) with his core trio Bandwagon that was more focused and grounded, emphasizing the basic musical values they had developed during their ten year collaboration. In 2014, they again expanded the group for the CD All Rise: A Joyful Elegy for Fats Waller (Blue Note).

On this return engagement, Moran pared the organization down to the core Bandwagon group of Moran on piano, Tarus Mateen on bass guitar, and Nasheet Waits on drums. Comcommitantly, they returned to the compact style and utilized the tunes from the Ten album. By continually building improvisations around deceptively simple motifs, and taking them to the limits of virtuosity and intensity, they proved themselves one of the top contemporary jazz trios. They have evolved to the point where they are so in synch with one other that they can take daring experimental risks and work them up into exciting and coherent "improvised compositions" that are truly original and spontaneous yet adhere closely to the well-grooved jazz-blues idiom that rings familiar to seasoned ears. Even though they are far out, they swing. Each musician exceeded all expectations individually, and as an ensemble they exhibited a rarely achieved cohesion and expressive power.

The strategy they used was to take simple, short motifs and tirelessly develop endless variations to a point of no return which pushed the limits of their playing to a high level of complexity and inspiration. For example, Moran began "Gangsterism Over Ten Years" with a stride piano introduction that had a sprinkling of Thelonious Monk off-center syncopations, and the group then co-improvised myriad rhythm changes which wove themselves into rich emotional expressivity. Or, in a dedication to Billie Holiday's 100th birthday (she was born on April 7, 1915), Moran played her Decca recording of "Big Stuff," a lazy swing era tune, and as the Holiday version faded out, they used the chord changes to go their own rough-house way with a Holiday twist. Another number began with an Afro-Carribean drum solo by Waits that segued into a dark and heartrending evocation of "Body and Soul." Following a standing ovation, the group played an encore, "The Subtle One," composed by bassist Mateen and featuring a mind-boggling solo that eloquently drenched the auditorium with deep, unrelenting low register sound.

Bandwagon, though unique and contemporary in approach, bears comparison with the great piano trios and quartets of all time. They explore rhythm changes in the manner of the early Dave Brubeck Quartet. They possess the savoir-faire and coordination of the Oscar Peterson Trio and Quartet with Herb Ellis on guitar, Ray Brown on bass, and Ed Thigpen on drums. And they have the endless exploratory drive of the Keith Jarrett trio with Gary Peacock on bass and Jack DeJohnette on drums. These groups developed unique idioms and exquisite coordination by their simpatico rapport and by working closely together over extended time periods. The same can be said of Jason Moran's Bandwagon, which, in this concert, proved its mettle as a group that belongs to the Pantheon of the great ensembles.