By IAN PATTERSON
August 4, 2014
Sign in to view read count 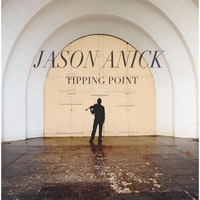 One of the Berklee College of Music's youngest instructors, violinist/mandolinist Jason Anick had already made a name for himself in 2008, when at twenty two years of age he was invited to tour with Grammy-winning guitarist John Jorgenson. Anick's tremendous virtuosity was to the fore on the acoustic Rhythm Future Quartet's Sleepless (Self Produced, 2011), a lively gypsy jazz romp—a genre he excels in. Tipping Point, however, showcases Anick's more contemporary songwriting acumen and the numerous stylistic strands that define his voice. Seamlessly fusing swing, bebop, hard-bop, classical, folk, as well as contemporary influences in his playing, it's a vibrant portrait of a colorful musical personality.

The eleven tracks are split between Anick's originals and interpretations of jazz standards, with the leader employing two different quartets. On the five originals, Anick switches between violin, acoustic and electric mandolin, showing the sort of form that prompted Christian Howes to hail him as "easily one of the best jazz violinists and mandolinists of his generation."

Anick and alto saxophonist Clay Lyons make a striking front-line pairing, alternating between single and dual voices, while bassist Chris Loughman and drummer Mike Connors keep immaculate, swinging time. On the jaunty "Stomped Out" it's Lyons who breaks first from the head to carve a sinewy solo whose final note signals a change of pace, followed by a delicate intervention from pianist Jason Yeager. Throughout the recording Anick's sense of group dynamics is pronounced, directing changes in tempo and combinations of voices with panache. His solo on this opening track is a fluid hybrid of folk fiddle and post-bop jazz—dashing and lyrical.

The rhythmically mutating "Inspiration Point" swings between punchy, almost fractured time and free-flowing rhythms dictated by fast-walking bass and ticking ride cymbal. Lyons spars playfully with Anick, whose stylish electric mandolin solo sings like Wes Montgomery. Yeager's freer playing over a repeating saxophone/mandolin motif contrasts with the leader's measured elegance that precedes it. Acoustic mandolin and arco combine on the pretty intro to "Maryandra," though a skipping drum rhythm soon sets the tone. Yeager and Anick both delight on extended solos before a quasi-baroque waltz between bass, piano and mandolin asserts a more stately tone.

The other two self-penned compositions serve up contrasting moods: The contemporary-sounding "Occupy"—which won third prize in the jazz category of the International Songwriting Competition 2013—stems from a simple bass ostinato and a gently seductive mandolin melody. A quickening bass pulse ushers in greater collective impetus, with piano and mandolin riffing powerfully. Yeager dabbles in a swirling, Don Pullen-esque improvisation before a lulling mandolin melody restores calm. "This One's For You" gathers momentum surreptitiously, with Anick at his most compelling; unequivocal lyricism lies at the heart of his dancing improvisation.

The half dozen non-originals have all been around the block a few times but Anick's smart arrangements—and vibrant playing from the second quartet—animate these old chestnuts. Anick leads the jazz manouche charge on Django Reinhardt's classic "Minor Blues," with pianist Matt DeChamplain, bassist Adam Cote and Anick all stretching out. Pianist and violinist engage in a lively to and fro that gives way to the head once more. A fine balladeer, Anick's emotive playing on the late Horace Silver's "Peace" provides an album highlight.

The quartet has the wind in its sails on Hank Mobley's much-covered "This I Dig of You." Anick evokes the former Jazz Messenger's warm, mellow tone, and on the whole appears at least as much influenced by saxophonists as by Stephane Grappelli, Joe Venuti et al. Anick on electric mandolin, tenor saxophonist Kris Jensen and guitarist Lee Dynes sound the melody of Ornette Coleman's "Turnaround," before each in turn unleashes boppish solos laced with the blues, carried by Loughman and Connor's in the pocket groove.

The great American Songbook inspires Anick and quartet to some of their finest playing: on Guy Wood and Robert Mellin's ballad "My One and Only Love" Anick and DeChamplain craft achingly beautiful solos, molding and embellishing the melody tenderly. Jerry Brainin and Buddy Bernier's "The Night Has a Thousand Eyes" is executed with brio. DeChamplain and Anick both enjoy racing solos as Cote's fast-walking bass and Connor's light but propulsive rhythms drive the quartet. Anick saves his best for last, gliding effortlessly at pace through constantly inventive melodic figures. A salsa piano motif and riffing violin provide a final flourish.

A fine interpreter and captivating soloist, Anick's essentially melodic narratives draw from an extensive vocabulary, wedding lyricism and verve. The covers may stand out for their familiarity, but Anick's originals contain their own charms and warrant repeat listenings. On tunes old and new, Anick's snappy arrangements bring the best out of the first rate musicians, who contribute much to the success of the music. The CD title suggests Anick is leaning towards the direction he wants to take; on this evidence, Tipping Point could be the start of a beautiful adventure.

Stomped Out; Inspiration Point; Maryandra; Minor Blues; Peace; Occupy; This One’s For You; My One and Only Love; This I Dig of You; Turnaround; The Night Has A Thousand Eyes.