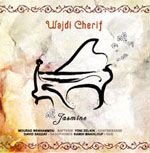 Words like "progress," "advancement" and "moving forward" are dangerous to use in describing art, yet they pop up all the time in that context. The idea that the history of jazz is one of progress or advancement rather than simply change is very popular, but unwarranted in my view. It would be easy to say that Wadji Cherif has progressed from his first album, Phrygian Istikhbar—a fusion of Arabic music and jazz that stayed more on the Arabic side—to this very fine release, which spends much more time on the jazz side.

Yes, Jasmine still has that immediately identifiable trill that marks Arabic music, but each tune now has the feel of deep jazz much of the time, sometimes almost entirely losing the connection to Arabic music. The journey that a track takes is two-fold: the usual one through melody, improvisation and melody; but many times also a second one from Arabic music to jazz and back (or the reverse). Calling this an advance is a misnomer, since both parts of Cherif were present in the earlier album. Suffice it to say that he has now decided to delve more deeply into the jazz side of his musical personality.

Jasmine begs comparison with Le Voyage de Sahar by fellow Tunisian Anouar Brahem, but it's mostly contrast. Brahem's instrument is the oud, or Arabic lute, and thus his playing is more strongly related to place. Harmonically, Brahem is almost exclusively tied to a main scale and is much more limited than Cherif, who not only moves many times entirely away from scalar passages and uses totally recognizable jazz harmony, including "out" notes and substitutions, but manages to play "out" from the scale, which is shocking to the ear. Finally, Cherif's treatment of rhythm in both his own playing and that of the rest of the band is decidedly Western.

"Pochade," the opening track, can be understood as a statement of purpose for the rest of the album. This tune won an honorable mention in the Instrumental category in the 2005 International Songwriting Competition (ISC). After an introduction of the melody by the piano, complete with the trill, the piece shifts slowly away from Arabic music to a fantastic, totally jazzy solo by David Sauzay on soprano sax that is as pungent as anything in recent memory. Cherif then takes over and keeps drifting back and forth between worlds, which is a very jazzy thing to do.

Jasmine itself deservedly won a Best CD of 2005 Award from the Indie Acoustic Project in the category of World Music-Eurasia & Global Beat.

The reach of the jazz aesthetic keeps expanding, and Jasmine is a prime example of a totally successful fusion of different musics.