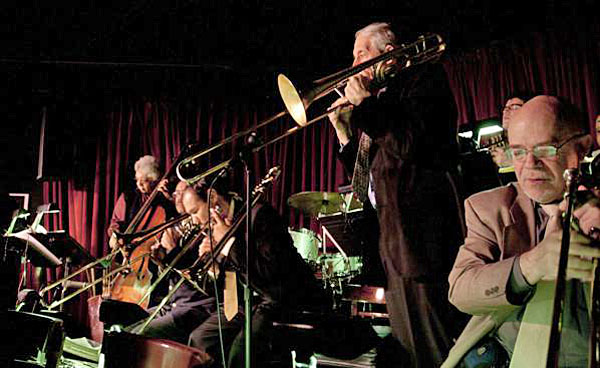 By EMILIE PONS
April 16, 2011
Sign in to view read count
On Monday, April 4, 2011, the storied Village Vanguard, a classy little West Village basement club, hosted one of numerous benefit concerts for Japan around New York City. The Village Vanguard Orchestra was featured for three incredible sets, like every Monday; but on this special occasion invited a series of wonderful guest musicians to contribute.
Pianist Fred Hersch, bassist Rufus Reid and saxophonist Jerry Dodgion sat in on the first set. Much of the band's repertoire was composed and arranged by Orchestra founder Thad Jones. The band played two Jones originals—"Mean What You Say" and "Don't Get Sassy," his arrangement of Billie Holiday's "Easy Living," and his arrangement for the band before passing away in 1986—and Bob Brookmeyer's "The First Love Song," in the first set.
Singer Renee Manning, who performed with the band twenty years ago, and Jimmy Owens, an Orchestra alum, sat in for the second set. Trumpeters Tom Harrell, Roy Hargrove and Lew Soloff, pianists Barry Harris and Toshiko Akiyoshi and flutist/tenor saxophonist Lew Tabackin played on the third set.
The event was a collaboration between Migiwa Miyajima and Sixteen As One Music Inc. (The Vanguard Jazz Orchestra's not-for-profit organization), and raised $7,000 for the Japanese jazz community of students and musicians. As New York-based Japanese photojournalist Takehiko Tokiwa explained, Miyajima, pianist and big band leader in Tokyo, "has been a big fan of the Village Vanguard Orchestra for a long time."

The night was a way for the American jazz community to show its support for Japan in difficult and tragic times. Miyajima, dressed in a traditional Japanese outfit, mentioned, in the middle of the first set, in a most poignant thank you to the musicians, that "35,000 people [are] dead already [and] Japan [is] a small country." The event was also a way to thank the Japanese people for their tradition of contributing to jazz. After all, without the Japanese high taste for jazz, New York jazz clubs would lose a significant number of their aficionados.

Trombonist/bandleader John Mosca introduced each song with humor, while punctuating the show with snippets of the Village Vanguard Orchestra's history. He brought extra warmth to the whole event, explaining, "When I first joined the band, my first trip was to Japan [in] 1975. [It was a] fantastic tour [which lasted] one month. [We went] from top to bottom. [And I had to wait] 35 years before returning to Tokyo. [We have done] two very successful trips [in 2009 and 2010." Those recent trips have brought the Village Vanguard Orchestra and the Japanese jazz community closer.

The show was a way to remind America of its connection to Japan, to remind the world of Japan's strong connection to jazz, and to recall the intrinsic collective nature of jazz, which gathers people together beyond oceans and seas, all over the planet. Monday night was proof of the most important soothing nature of jazz. Solidarity and peace filled the club.