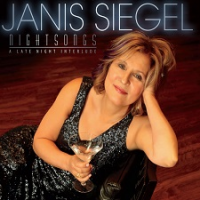 Vocalist Janis Siegel is the mezzo-soprano/alto quarter of the Manhattan Transfer as well as half of the female contingency of the same with soprano Cheryl Bentyne. Like Bentyne, Siegel has managed a very successful solo career, releasing ten recordings since 1981. Nightsongs: A Late Night Interlude follows 2006's A Thousand Beautiful Things (Telarc, 2006) and 2004's Sketches of Broadway (Telarc). Siegel is a wholesale master of jazz vocals subgenre: ballads, scats, bop, she competently does them all. Nightsongs endeavors a theme of breezy Caribbean evenings, comfortably humid and crepuscular.

ADVERTISEMENT
Sonically, this is an exceptional hearing. The engineer is impeccable, and the production is top notch without being overdone. There is a comfortable balance between the shiny and organic in this music. "Love Saves," "Slow," and "Marie" smell like salt and spray in the islands. "A Flower is a Lovesome Thing" is given a measure of funk among other piquant Latin delights, John di Martino modulates time and space over Christian McBride's muscular electric bass. Siegel shares a duet with Peter Eldridge on Jobim's "If You Never Come To Me" that is as provocative as it is simply elegant. Siegel continues to inhabit an upper echelon of jazz vocalist few can aspire to. Siegel wins with this fine band and material.