Jane Bunnett: The Spirit's Dancing in the Flesh! 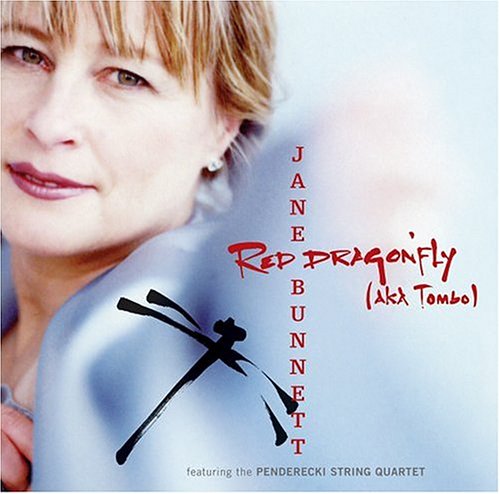 Red Dragonfly—aka Tomba (EMI Canada, 2004) is the gorgeous result of that dream! The record features Jane Bunnett (soprano sax) who is joined by Larry Cramer (trumpet and flugelhorn); David Virelles (piano); Kieran Overs (bass) and Mark McLean (drums) as well as by the celebrated Penderecki String Quartet. The program re-creates folk songs from around the world, represented through the souls of modern arrangers, for the modern era. This is a significant achievement not only for Jane Bunnett, but also for the arrangers themselves. Don Thompson, Hilario Duran, David Virelles... all contributed to making this project an oblique tribute to—in many respects—the genius of Bela Bartok. For just as Bartok turned the folk music of Hungary into some of the most enduring music in the classical mould, so also have Jane Bunnett and her cast and crew of Red Dragonfly transformed some of the most enduring folk music of the Americas, Japan and Africa into a triumphant offering for the art of jazz!

Celso Machado's "Odira-e," Jim Pepper's moving Peyote chant, "Witchi Tai To," Kousaku Yamada's "Red Dragonfly (aka Tomba)," "Divule Oni," the Yoruba song, "Nkosi Sikelel'i Africa," and "Un Canadien Errant" all contribute to a more fulfilling Jane Bunnett songbook, which is now more priceless than ever. But perhaps the most spectacular piece on the album is "Heaven's Gate," written by Bunnett herself, and which showcases her immense compositional skills and grasp of the folk milieu.

Dreaming of Jane Bunnett—much like the song David wrote once... And in the dream, these words come top-of-mind... Guantanamo, Cuba... perhaps I misunderstood you... I thought you was a military base only... a damn American one with eyes on my brothers there... So sorry I forgot your Changui people, maan... 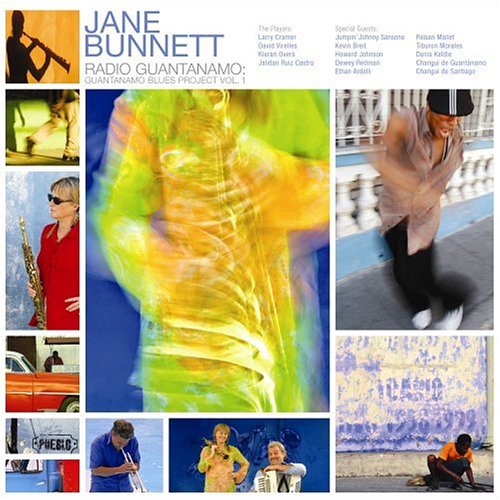 But Jane Bunnett and Larry Cramer have not forgotten. They return once more to Cuba, this time dancing the line of out-of-control! Inspired by the music of Grupo Changui de Guantanamo and also Grupo Changui de Santiago. Radio Guantanamo—Guantanamo Blues Vol.—1 (Bunnett/Cramer/Blue Note, 2005) is born... It is almost like a secret revealed... No one expects such a vibrant music... But you cannot be tired of dis rumble beat... You best listen to Jane Bunnett: "Throughout this celebration of sounds, we brought some of our favorite musicians, whose... diverse background connected in a profound way..."

No truer word is spoken! Jumpin' Johnny Sansone dives in with his two compositions that capture perfectly the life of New Orleans. "Gimmie One Dollar," and "No Money No Chica" drive the Grupo Changui de Santiago to ecstatic reverie... Sansone's battered guitar and harmonica meld spectacularly with the tres, bongo and marimbula of the Changuiseros! The group is also joined once more by the venerable Dewey Redman, whose spiritual wailing and incredible blue notes pay unforgettable homage to "Yemaya and Changui," goddess of the ever present sea. Howard Johnson also stars in a roaring tribute to the marching bands of New Orleans—he stretches on a solo and trades licks with the marimbula in the stunning "Conga Blue."

But lest there be a frivolous note here, listen not. Jane Bunnett and Larry Cramer have determined that they must carve another trail in the rich cultural miasma of Cuba. This one, however, has a very different tone. In a strange way, this joyful record is also an enduring statement of the commitment to true folklore, wherever it may exist. The record ranks—with Bill Laswell's Cuban expedition—as a classic that captures the ravishing heartbeat of Cuba. It also records for future generations the complex mix of European melodies and West African polyrhythms... In improvisation, the call and response vocals Changui triumphs as the precursor to the Cuban 'son,' but there is something more complex, more primal than its young offspring... Jane Bunnett and Larry Cramer tracing The Lost Steps of Carpentier?

She exudes a nervous energy when she is speaking, constantly searching for the right word to describe an experience or a memory, both of which she has in abundance, despite her relatively young age. She speaks with bowed head and furrowed brow... with reverence and compassion of elders and experiences, but always with an astute sense of history...

Throughout her expedition, Jane Bunnett has pushed the envelope—both as a musician as well as a collaborator. She and her husband, trumpeter, producer and co-conspirator, Larry Cramer, have been instrumental in opening hearth and home to the music of Cuba. No one has done more to bring more music and musicians to the world outside that vibrant country that has been so unfairly treated for the past 50 years! Yet Jane Bunnett is no fusionist! Cultures collide in her art as it traversed the musical universe joyfully destroying borders. Ten of her albums have been made with some of the finest, yet largely unknown Cuban and other Latin American musicians and they recall to mind the great work done by Pharaoh Sanders and Randy Weston with the Gnawas of Morocco.

Musically, Jane Bunnett is a direct descendent of Coltrane and Pharaoh Sanders—although was most certainly shaped by one of the soprano's greatest exponents—Steve Lacy, with whom she studied. Her technique on the instrument is virtually unsurpassed. But what is most significant is her deeply spiritual sound. She also plays flute with equal facility and her sound is so haunting at times that she can conjure up the ghost of Dolphy flitting happily like a jitterbug, or roaring like a dark foreboding sky on a stormy night. No matter what instrument she plays, however, Jane Bunnett speaks to the soul with her horns. Her commitment to her art is so total; she could not really play a note wrong. The spirits are truly dancing in the flesh here!

Live at the Sweet Basil (Music & Arts Program of America/Denon, 1990)