By CHRIS MOSEY
January 7, 2011
Sign in to view read count
What do Andre Previn and Cole Porter have in common? Well, with Saul Chaplin, Previn adapted Porter's greatest hit, the score for the 1953 MGM musical Kiss Me Kate. Apart from this, and with little apparent consequence until now, both men greatly influenced the life of Torgil Rosenberg, a Swedish dentist, amateur flier and jazz enthusiast.

The consequence of Rosenberg's founding enthusiasms is now upon us. His mission is to make today's youth aware of its musical heritage. Having retired from dentistry, he has set up his own record label, Volenza, to do just this, and for his first two releases has hired internationally acclaimed pianist Jan Lundgren to arrange a representative selection of songs by his two heroes, Previn and Porter, and to play them with other top Scandinavian jazzmen.

For the first album, the salute to Previn, made to coincide with the great man's 80th birthday on April 6, 2009, the band had no name. For the second it calls itself Artistry Jazz Group. 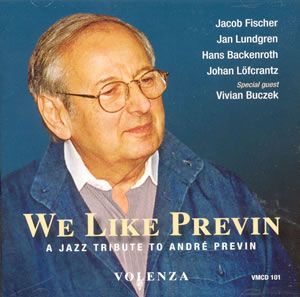 We Like Previn: A Jazz Tribute to Andre Previn

Previn was just 17 when he wrote the opener, "Blues for Georgia." Lundgren's arrangement provides short solo opportunities for himself, guitarist Jacob Fischer and Hans Backenroth on bass, and the number serves as an excellent introduction for what's to come, starting with "I Like Myself" from the 1955 musical It's Always Fair Weather.

Unlike the brilliant and innovative Porter, Previn—until he escaped to the world of classical music—was very much a Hollywood hack, adapting other people's music and writing scores for a string of undistinguished movies. He penned "A Second Chance" for the 1962 film Two For The Seesaw, summed up on Rotten Tomatoes as "one for the cinematic dustbin."

Then comes the number that Previn should be remembered for: his hauntingly lovely "Coco," the title track of the 1969 musical based on the life of French fashion designer Coco Chanel. An adventurous arrangement by Lundgren allows bassist Backenroth to state the theme.

"Saturday" is a 44-bar Previn salute to his first influence, Art Tatum. Like Tatum, in jazz Previn often made the mistake of valuing technique over feeling.

There follow a mix of film songs and numbers written by Previn for his jazz trio before we come to "Why Are We Afraid?" written for the movie The Subterraneans, based on a Jack Kerouac novella. Today it's best remembered for appearances by horn players Gerry Mulligan, Art Farmer and Art Pepper, bassist Red Mitchell, drummer Shelly Manne and—would you believe?—André Previn.

ADVERTISEMENT
The album concludes with a novelty, Torgil Rosenberg's own composition, "Guiding Light," dedicated to Previn and featuring a scat vocal by Buczek. 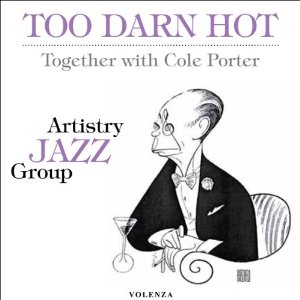 Too Darn Hot: Together With Cole Porter

The session kicks off unpromisingly with an "Anything Goes" shorn of lyrics and with Lundgren opting for a rather static "music box" arrangement of the theme, featuring his piano and Fischer's guitar. Both redeem themselves with some nice improvisational work later on.

Lundgren's chart for "You Do Something To Me" has more air through it and features some immaculate guitar. But it's not until the third number, "What Is This Thing Called Love," that Porter's trademark bittersweet words are allowed to come to the fore, with Buczek getting it just right after the rather academic "bop" intro.

There's a great instrumental version of "You're The Top," with both Lundgren and Fischer stretching out before trading four-bar breaks with drummer Löfcrantz Ramsay. Lundgren then turns in a nicely meditative performance of "In The Still Of The Night."

Buczek is given star billing in the arrangement of "At Long Last Love," making the most of Porter's wonderful lyrics that compare love with all manner of improbable things, including mock turtle soup, the original recipe for which starts with the words, "Take a large calf's head. Scald off the hair."

"Dream Dancing" is a vehicle for Backenroth, whose talents deserve an audience beyond the Nordic area. Then—at last—the title track, with Buczek giving a suitably sizzling performance. She's let loose again on "It's All Right With Me" and for a tour-de- force on the closer, "I Happen To Be In Love."

With these albums, Lundgren secures his place as one of Europe's most elegant and inventive jazz pianists and as an arranger of considerable talent. Meanwhile, Rosenberg says of his first ventures into production: "The result calls for future sessions, for more to come." Let's hope so.

Tracks: Blues For Georgia; I Like Myself; A Second Chance; Like Young; Coco; Saturday; You're Gonna Hear From Me; Hi Blondie; Far Away Part Of Town; The Pleasure Of Your Company; Theme From Valley Of The Dolls; If I Should Find You; Why Are We Afraid?; More In Love With You; Guiding Light.

Tracks: Anything Goes; You Do Something To Me; What Is This Thing Called Love?; You're The Top; In The Still Of The Night; At Long Last Love; Down In The Depths Of The Ninetieth Floor; Dream Dancing; Too Darn Hot; After You, Who?; All Through The Night; It's All Right With Me; I Concentrate On You; From This Moment On; I Happen To Be In Love.