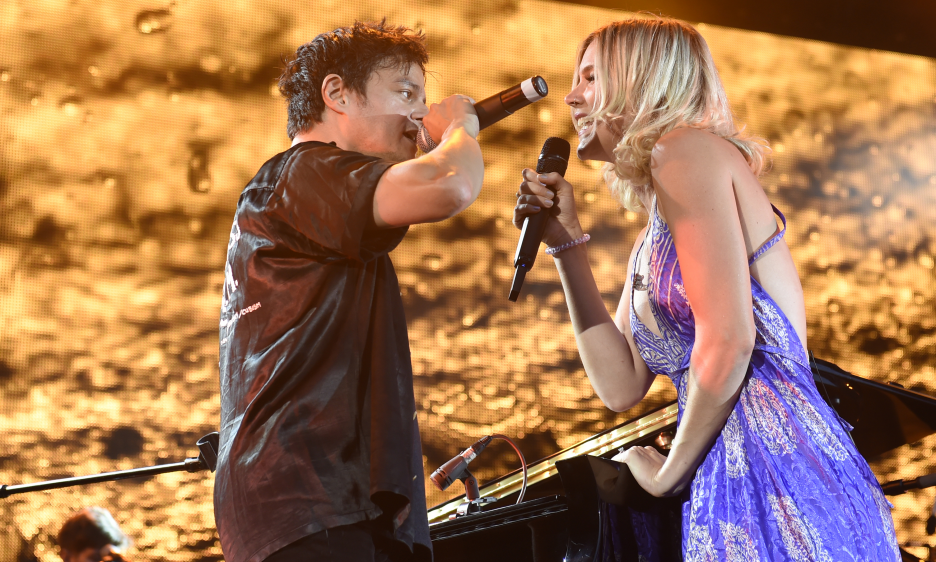 The Stuttgart Jazz Open was seeking special things to commemorate the festival's 25th anniversary edition. With a double bill featuring Jamie Cullum and Joss Stone, that goal was accomplished to the delight of a dancing, sellout crowd.

Cullum is one of the most dynamic players in any genre. His two-hour extravaganza showcased why he remains one of the most in-demand performers in the busy European summer festival schedule.

Cullum alternated between animated antics while seated at the piano or during standup, jumping jack flashes across the large stage. He opened with "Get Your Way," then tapped into his inner Ray Charles with the soulful "Don't You Know." Singers Aisha Stuart and Shanna Goodhead provided solid backup throughout the night.

Cullum's energetic band (Loz Garrett on bass, drummer Brad Webb, Rory Simmons on trumpet/electronics/guitar and Mike Lesirge on saxophone/keyboard) was also up to the task.

Cullum went solo for "These Are the Days" then thumped out some dashboard drumming on various parts of the piano, leading into "Don't Stop the Music," which demonstrated the high level of playing he's capable of.

Next came one of those concert moments that cause almost everyone to pull out a camera for justifiable, "I was there" documentation when Stone strolled out for a sultry, upbeat duet on The Beatles' "Come Together." It wasn't even the best song of the set, but it may have been the festival's highlight.

The Stuttgart Gospel Choir, numbering almost two-dozen, joined in for much of the show, including "Save Your Soul" and "When I Get Famous." While the evening wasn't traditional swinging, there were more than enough saxophone or trumpet runs to qualify for a "jazz type" designation.

Cullum followed Stone's previous lead and descended from the stage to embrace the crowd during a percussion based "Sinnerman" and showed how catering to social media is a current concert skill, as the masses swarmed for selfies.

The entire show was damn well done. Cullum could have stopped there, but he treated the assembly to even more, rising from excellence to ecstasy.

The segue during a medley of "All at Sea" and "High and Dry" had people howling in approval. Of many remarkable moments, perhaps the most unusual was a call and response that actually worked.

At approximately 7,000 people, the crowd's absolute silence during Cullum's barely audible, pre-climactic riffs might have been the strongest feedback of the night, a welcome rarity in this age of blabbering audiences. You will not witness such a thing often.

A solo take on "What a Difference a Day Makes" iced Cullum's cake. Amidst the exiting swarm, everyone looked very, very happy.

Co-star Joss Stone definitely contributed to the positive vibes. There were issues with the sound quality throughout her one-hour set, but Stone's soaring vocals came through none the less. What the sound system lacked, Stone more than made up for with crowd interaction. She's a charmer indeed, and songs like the opening "Newborn" verified her compositional chops. Stone had the crowd under a spell from the second song, "Big Ol' Game," and they clapped along without any prompts all evening. A take on Tom Petty's "Wildflowers" was a bit syrupy, but the countrified feel came through so it wasn't a bad try.

"Music" was a fine song for the sunset, and deserved the enthusiastic applause it garnished. "For God's Sake" was one of the few real rockers, and a closing highlight.

Stone and her band deserve plenty of credit for just for remaining lighthearted while staring into the sun on a hot, high UV level day that had most attendees scrambling for the shade.

Louise Bagan and Arita Lockett handled background vocals, with Christian Lohr on keys and Ricky Jordan on drums. Steve Down played guitar, with Pete Innacone on bass. They probably all deserved better than the uneven mix they got, but playing with a star like Stone has it's advantages anyway.

The afternoon opened with a set by Sarah and the Gang, who showed some youthful promise and were a decent prelude for Stone's soulful type of set. The quintet, who formed last year at Mannheim's Music High School, took advantage of their exposure on a big stage and it was nice to see the crowd give the unpolished kids some love.

There was plenty of affection to go around on a special summer night in Stuttgart, with a lot to love during both Stone's, and especially Cullum's exceptional shows.