James Taylor and Bonnie Raitt at the Prudential Center 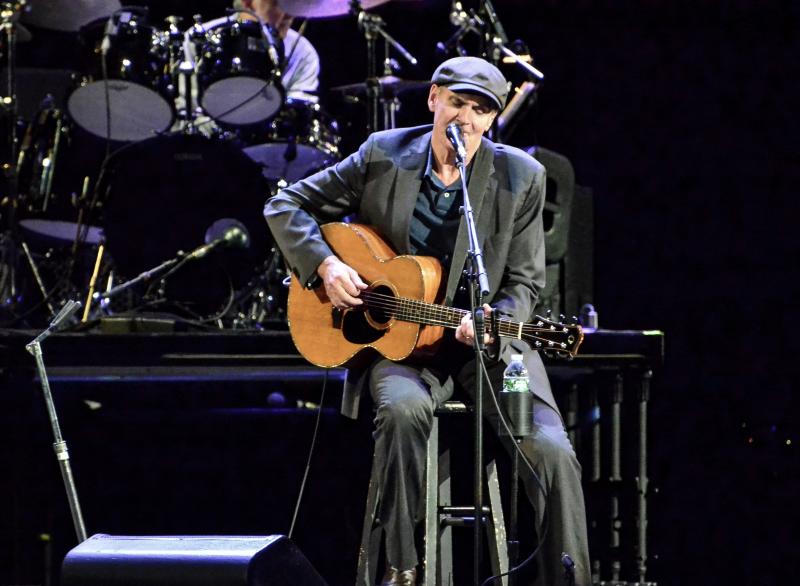 On a pleasant Thursday evening just after the 4th of July, when many of the audience members were enjoying an extended Independence Day holiday, James Taylor and Bonnie Raitt touched down at Newark, NJ's Prudential Center for the first night of their 2017 summer tour.

James Taylor was born in Boston, MA on March 12, 1948. In 1951, his family moved to Chapel Hill, NC, where his father, Dr. Isaac M. Taylor, had taken a job teaching medicine at the University of North Carolina School of Medicine. As a youngster, Taylor spent his summers on Martha's Vineyard. There he met he met Danny Kortchmar, an aspiring teenage guitarist from Larchmont, NY. During this time, Taylor wrote his first song on guitar. By the summer of 1963, he and Kortchmar were playing coffeehouses around the Vineyard.

In 1967, Taylor moved to London and his friend Kortchmar helped him get his big break. Kortchmar connected Taylor to Peter Asher, who was A&R head of The Beatles' Apple Records. Asher played Taylor's demo for Paul McCartney and George Harrison and Taylor became the first non-British act signed to Apple Records. Apple released his debut album, James Taylor, in December 1968 in the UK and February 1969 in the US. The album received positive critical reviews but poor commercial response. Due to health issues Taylor was unable to promote the album, despite the inclusion of the song "Carolina On My Mind," it did not sell well.

In 1969, Taylor signed with Warner Brothers Records, moved to California and kept Asher as his manager and record producer. His first record for Warner Brothers, Sweet Baby James was released in February 1970 and was a commercial and critical success. The album featured the hit single "Fire and Rain" (a song about Taylor's experiences attempting to break his drug habit by undergoing treatment in psychiatric institutions and the suicide of a friend), "Country Road" and "Steamroller Blues." During the '70s, Taylor found unprecedented success with the Warner Brothers albums Mud Slide Slim and the Blue Horizon (1971), One Man Dog (1972), Walking Man (1974), Gorilla (1975) and In The Pocket (1976), as well as the Columbia Records albums JT (1977) and Flag (1979). The albums features the fan favorites and classics "You've Got a Friend," "Long Ago and Far Away," "Don't Let Me Be Lonely Tonight" "Walking Man," "Hello Old Friend," "Mexico," "How Sweet It Is (To Be Loved by You)," "Shower the People," "Family Man," "Your Smiling Face," the number 4 hit single "Handy Man" and "Up on the Roof." He has continued to release critically acclaimed albums through the 1980s, 1990s and 2000s. In 2015, Taylor earned his first No. 1 album on the Billboard 200 chart with Before This World (Concord Records).

During the course of his career, Taylor has received many accolades. He was ranked number 84 in Rolling Stone's list of "The Immortals: 100 Greatest Artists of All Time." He received an Honorary Doctorate of Music from Williams College. He was inducted into the North Carolina Music Hall of Fame and the Hit Parade Hall of Fame. He received an Emmy Award for The Mormon Tabernacle Choir Presents an Evening with James Taylor. Taylor was also been bestowed with the Presidential Medal of Freedom and has been honored by the Kennedy Center. Taylor is a five-time Grammy Award winner who was inducted into the Rock 'n' Roll Hall of Fame in 2000. During his career he has sold more than 100 million records worldwide.

Bonnie Raitt is the proud owner of ten Grammy Awards. She was inducted into the Rock 'n' Roll Hall of Fame in March of 2000. Raitt is ranked number 50 on Rolling Stone's list of the "100 Greatest Singers of All Time." She is also ranked in the top 100 of the magazine's "100 Greatest Guitarists of All Time" (at number 89). The 67-year-old blues singer-songwriter/guitarist is the daughter of the Broadway musical star John Raitt and his first wife, the pianist Marjorie Haydock. Though raised in a musical family, Raitt says she picked up the guitar at summer camp.

In 1967 Raitt entered Radcliffe College, and during her sophomore year decided to take a semester off, move to Philadelphia and try her hand at making music. She was eventually signed to Warner Brothers records and during the 1970s, released quite a few critically acclaimed albums, that unfortunately weren't commercial hits. In 1989, Raitt finally hit the big- time with her tenth album Nick of Time (Capitol Records). The album topped the Billboard 200 chart, sold over five million copies, and won three Grammy Awards, including Album of the Year. Raitt followed up with Luck of the Draw (Capitol Records, 1991) and Longing in Their Hearts (Capitol Records, 1994). Both albums sold millions of copies. Over the years Raitt has released a number of hit singles, including "Have A Heart," "Something To Talk About," "Love Sneakin' Up On You, "I Can't Make You Love Me" and the John Hiatt- penned "Thing Called Love."

During their long and storied careers, Raitt and Taylor have performed together many times. They first met in 1970, when Taylor invited Raitt onstage for a gig at the Sanders Theatre after the two met through a mutual friend. A friendship blossomed and over the years, the two musicians have performed on the same bill at benefits for a number of causes—environmental, social and political. With so much in common, a joint tour became the next logical step. On this evening Raitt and her band started things off in grand style with "Unintended Consequence of Love" followed by a wonderful take on INXS' "Need You Tonight" and "No Business" the John Hiatt tune she covered on Luck Of The Draw. Raitt then paid homage to Taylor, her tour mate and friend by introducing "Rainy Day Man" with, "I'd like to dedicate this JT song to James Taylor. He's just as fine a person as you'd hope he'd be." Suring the middle portion of the show, Raitt made sure that she covered her hits delivering perfect renditions of "Love Me Like A Man" and "Something To Talk About" as well as a reggae-tinged version of "Have A Heart."

It was on the final portion of the performance that she and her band really shined. During the final four songs (each of which was a welcome surprise) Raitt turned it up a notch for Los Lobos' "Shakin' Shakin' Shakes" from 2016's Dig In Deep (Redwing Records), John Prine's powerful "Angel From Montgomery" (which she originally released on the 1974 Warner Brothers album, Streetlights) and a blistering cover of the Talking Heads' "Burning Down The House" from Road Tested (Capitol Records, 1995). The last song of her set featured the evening's biggest surprise, though Raitt had hinted a bit about it earlier. She stepped forward and addressed the crowd saying, "I have a very special treat for you. Won't you welcome to the stage, my friend, James Taylor! Thanks for having me James!" The mostly middle-aged audience rose to its feet and lost its collective mind as Raitt and Taylor performed a fantastic rollicking call-and-response version of "Thing Called Love."

After a short intermission, Taylor appeared onstage wearing his customary newsboy cap while a career, and life- spanning video montage was projected in the background. He opened his set accompanying himself on acoustic guitar along with back-up singers Kate Markowitz, Arnold McCuller and Andrea Zonn (who also plays a mean fiddle) on "Carolina in My Mind." About half-way through the song he was joined by the rest of his large band (which featured Walt Fowler on horns and keys, guitarist Mike Landau, Jimmy Johnson on bass, Larry Goldings on piano, drummer Steve Gadd, saxophonist "Blue Lou" Marini and Luis Conte on percussion).

During his two-hour set, Taylor delivered the singer-songwriter pop-rock for which he is best known. "Country Road," "Sunny Skies" (which was introduced as a "song about a dog"), "Sweet Baby James, "Fire and Rain," "Handy Man," "You've Got a Friend," "Mexico" and "Steamroller Blues" all made their appearance.

Taylor was in a jovial mood. During the performance, he made it his mission to specifically introduce every member of the band, giving each a moment in the spotlight and a chance to shine. Throughout the evening, the video screens behind Taylor and his band featured archival footage, notebook pages featuring handwritten lyrics, home movies and old pictures which added a supplementary visual element to the performance.

The main set came to a close with "Shower The People," "Your Smiling Face" and "How Sweet It Is (To Be Loved by You)" as audience members rose to their feet and sang along with Taylor on his or her individual favorite.

It was the encores that made the evening truly special. Raitt came out and joined Taylor on "Johnny B. Goode," a tribute to the late Chuck Berry. Her slide guitar melded perfectly with Landau's riffs as each guitarist delivered tasty solos. Next up was "You've Got a Friend" a fitting song as the musical giants have known each other since the early '70s. The evening ended with a sweet version of "You Can Close Your Eyes" sung together in harmony accompanied only by Taylor's acoustic guitar.

The evening was quite special. The audience was given the opportunity to see two iconic artists perform together on the same bill as well as perform together on a few timeless tunes. The concert was an event... an event that these days is not often seen. Classic artists and friends collaborating to deliver an amazing evening of entertainment during which the performers were at the peak of their powers. This fact was not lost on those in attendance at the Prudential Center.