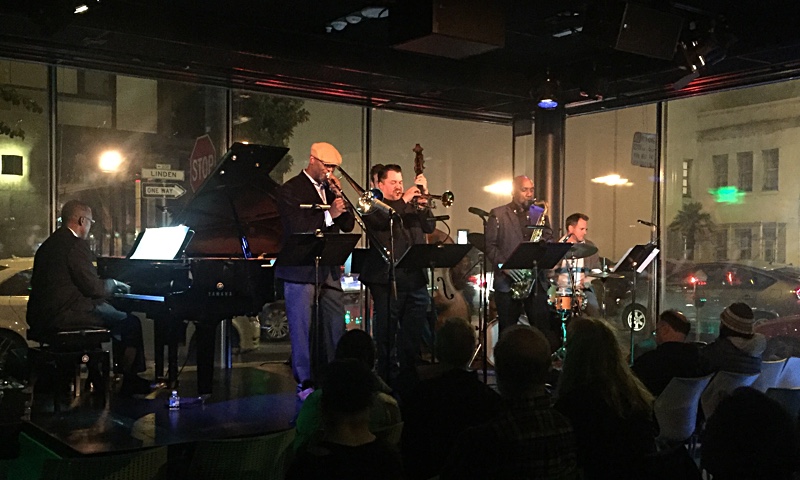 Way back in the early 1960s, a major new composer and trumpeter emerged on the scene, teamed up with extraordinary jazz musicians such as Reggie Workman, Julian Priester, Max Roach, Ron Carter and Eric Dolphy to produce four releases whose legacy endures today.

A Memphis native, Booker Little came from a musical family. His father, who worked as a Pullman porter, played trombone, while his mother was a pianist. Heading on to Chicago Conservatory, he was fortunate enough to work with Johnny Griffin. Moving to New York, he shared digs with the illustrious Sonny Rollins and then met collaborators Roach and Dolphy. Clifford Brown, Little's chief musical influence, died in a car crash in 1956. Little passed away from complications resulting from uremia on October 5, 1961 at the tender age of 23.

SFJAZZ's Hotplate series regularly invites local artists to play the music of past jazz notables. For this show, Oakland-based tenor saxophonist James Mahone brought a group together to the Joe Henderson Lab to celebrate the music of Booker Little. Mahone has lived and worked in Tokyo and has played alongside the likes of Joshua Redman, Wynton Marsalis and the late Billy Higgins and Gil Scott-Heron, as well as having appeared as a sideman on a wide range of recordings.

Mahone's group included some heavyweights. Oakland native and head of music studies at the College of Alameda, Glenn Pearson has been playing piano since age 15. Trombonist Mitch Butler, a native of Raleigh, North Carolina, has led his own ensembles as well as participated in several jazz orchestras. Trumpeter Mike Olmos is a San Francisco resident who appears regularly with his own group and with those of others and played with the late Etta James. Bassist Joshua Thurston-Milgrom is a Stanford lecturer who has studied and played in Chicago and Berlin. Drummer Claudio Rochat-Felix currently works as a music analyst for Pandora (in addition to professional gigs), having previously taught percussion. He has worked as a sideman (and recorded with) the likes of Lauryn Hill, Jason Mraz, John Hicks and Gary Bartz.

Taking the stage for the beginning of the set, Mahone reflected upon Little's music; it is "powerful and deserves to be heard." The set kicked off with "Booker's Blues" from the oddly titled Booker Little and Friend (Bethlehem, 1961). Ensemble playing gave way to one of Butler's longwinded trombone solos. Mahone came in on tenor, before Pearson soloed eloquently. Pearson, waited on the side, one foot planted on the stage, until the proper moment when he stepped forward to solo and bring the tune to its conclusion.

A "one" and a "two" ushered in "Forward Flight," another tune from Booker Little and Friend, and spirited sax, trumpet and then trombone solos followed. Pearson gave a percussive edge to his playing on the 88s, while the bearded Thurston-Milgrom mouthed the notes as he thumbed his bass.

Next up was "Calling Softly" from Booker Little and Friend, and Mahone soloed fluently and flowing. After a trombone solo, all three horns converge to conclude the piece.

"Moods in Free Time," from Out Front (Candid, 1961) had Olmos front and center on trumpet. Rochat-Felix's reflective drum solo became a charge as the ensemble returned to bring it to an end. "Matilde," again from Booker Little and Friend again offered a lovely trumpet solo. Time allowed only a shortened version of Abbey Lincoln's arrangement of "Blue Monk."

The second set followed in much the same vein, and "Hazy Blues," "Forward Flight," "Strength And Sanity" and "Man Of Words" were played from Up Front, while a stretched out, concluding "Blue Monk" allowed Pearson to solo eloquently.