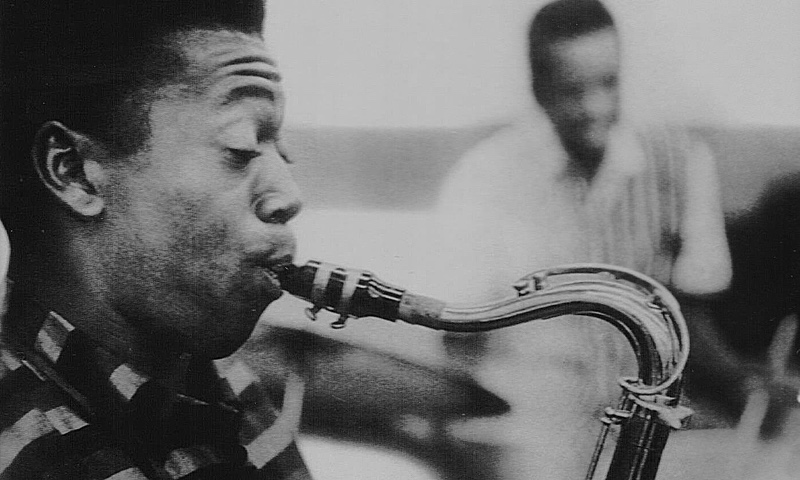 By DAVID PERRINE
August 13, 2015
Sign in to view read count
The term "Texas tenor" was originally coined to describe the sound and style of such swing era players as Herschel Evans, Illinois Jacquet, Buddy Tate, Budd Johnson, Arnett Cobb and others, and has subsequently been applied to second generation players from Texas that included James Clay, David "Fathead" Newman and Marchel Ivery. What these players had in common was a big sound and a feeling for the blues. Cannonball Adderley, in the notes to an album by Clay and Newman, described the Texas sound as "a moan inside the tone."

Texas tenor John Hardee achieved some prominence in the late '40s in New York where he made a number of recordings as a sideman and several under his own name for Regal/Savoy and Blue Note. He was in Count Basie's band for a while and often appeared with Tiny Grimes but eventually tired of the scene and returned to Texas where he taught at several high schools. While teaching and playing in Dallas, Hardee had a big impact on a teenage James Clay, who always cited Hardee as a primary influence, telling David Ritz that "I never knew anyone who played and knew so much tenor." (The best examples of Hardee's playing can be found on an album called A Little Blue recorded in France in 1975.)

Clay cut his teeth at a series of "legendary" jam sessions that took place at Woodman's Hall in South Dallas on Sunday afternoon. Many of the participants ended up in the Ray Charles Orchestra including saxophonists David Newman, Leroy Cooper, Eugene Haltom, Claude Johnson, and Clay as well as drummer John Bryant and others. Clay, who's talents developed early, was looked up to by the other players at Woodman's and acquired the nickname, "Heavy."

In 1956 Clay moved to Los Angeles and began sitting in with the locals. His first chance to record came on July 25, 1956 at one of the Chet Baker sessions for the Chet and Crew album. When Phil Urso lost the charts on the way to the session, the producers decided to record several numbers featuring various players present. Clay chose "In a Sentimental Mood." This was issued on a Pacific Jazz compilation called Solo Flight and also appears on some reissues of Tenor Man. The rhythm section is Bobby Timmons, Jimmy Bond, and Peter Littman. In this early recording, the 20 year old saxophonist exhibits many elements of his mature style, notably a refined lyricism. A long blues featuring all of the participants was also recorded but never issued.

Meanwhile, drummer Larance Marable had a record date coming up and was looking for a tenor player with an especially soulful sound. Despite the bounty of great tenor players in the area at that time, he was having trouble finding the sound he was looking for until someone told him to check out a kid from Dallas who had been sitting in at a local club. The result was the classic Tenor Man album which has been reissued many times, sometimes with bonus cuts. Recorded on August 4, 1956 the album features Clay with Sonny Clark, Jimmy Bond and Marable. There are excellent originals by Clark and Herb Geller as well as a good selection of standards. Despite his youth, it's one of the best albums of Clay's career.

During that same month, Gene Norman recorded five numbers with Frank Morgan, Jack Sheldon, Clay, Timmons, Bond and Marable at his Crescendo club after it had closed for the evening. These came out on a cd reissue of an album called Frank Morgan on the GNP Crescendo label. It's a nice little session although the audio is a bit dull.

After playing with Marable's band for a few months, and then Jack Millman's, Clay joined Red Mitchell's quartet. This was a remarkable collection of young talent with Lorraine Geller, and Billy Higgins joining Clay and Mitchell. The band was taped for the Stars of Jazz TV show, with Frank Capp subbing for Higgins, on February 18 1957. Five numbers were recorded with Clay sitting out on two that featured vocalist Toni Harper. The session came out on LP on the Calliope label and parts of it appeared on CD reissues of Tenor Man.

On March 27th of that year the quartet (with Higgins) recorded the superb Presenting Red Mitchell album. On this album, as well as the TV show and the Frank Morgan session, Clay is heard on flute as well as tenor.

While in Los Angeles, Clay had met and become friendly with fellow Texan Ornette Coleman, as well as developing a close friendship with Billy Higgins. (Clay briefly describes how he met Coleman in the film Ornette: Made in America.) He joined Ornette, Higgins and Don Cherry in a group called the Jazz Messiahs which would eventually morph into the Ornette Coleman quartet. Cherry has cited Clay as a major influence on his own development. However, the free bag wasn't really Clay's thing. As he told Jerry Atkins, "If it calls for it, I can go into it but my preference is straight ahead. You can find just as much in playing that way as outside—believe me."

When Clay's mother died, he was forced to return to Dallas to take care of his grandmother.
br />In January and February of '57, the Miles Davis Quintet had played some dates in San Francisco and Los Angeles. At one of these, Miles was listening, back stage, to Clay playing with Red Mitchell's group. Miles told Red Garland something like, "there..there.. there it is. That's it, that's it!" Later that year, Miles fired Coltrane for unreliability. Sonny Rollins took over the tenor chair for a few months, followed briefly by Bobby Jaspar. In the October 31 issue of Down Beat, a notice appeared in the "Strictly Ad Lib" column stating that Sonny Rollins was looking for Clay to join his new group. A correction appeared in the November 14 issue saying "It is not Sonny Rollins, but trumpeter Miles Davis who is seeking tenor saxophonist James Clay...." The item concluded with the mailing address for Clay's mother in Dallas.
Why the Downbeat correspondent thought that publishing that address in a Down Beat column was the best way to connect Miles to Clay is open to speculation. Word eventually filtered down to Clay that Miles was looking for him. But by the time Clay reached Miles on the phone, Miles had already hired Cannonball Adderley. (In January, Coltrane rejoined Miles' band marking the beginning of the sextet that, with a couple more personnel changes, would record Kind of Blue.)

In 1960, Clay was featured on three albums on the Riverside label. The first of these was a Cannonball Adderley produced session called The Sound of the Wide Open Spaces, recorded in New York on April 26. He was joined by David Newman, Wynton Kelly, Sam Jones, and Art Taylor. The album was an attempt to capture the archetypal "texas tenor" sound and was largely successful although Clay's solos are somewhat uneven, faltering here and soaring there. There are a lot of squeaks from Clay's horn on this session. This was a frequent problem (also heard on the Stars of Jazz session) due to his preference for stiff #5 reeds, but in the course of a fervent sax solo, a few squeaks were just like sparks or puffs of smoke from a powerful engine. On the ...Spaces album, Clay plays flute on one selection.

On October 11th, he recorded the Double Dose of Soul album with Gene Harris, Sam Jones, and Louis Hayes. Nat Adderley joins them on the four tunes that feature Clay's tenor. Victor Feldman joins on vibes for the three that feature flute. It was the first album to be released under Clay's own name. He was somewhat uncomfortable on the session due to being presented with unfamiliar originals by Feldman, Adderley, and Daniel Jackson. Nevertheless, it contains some of the best recordings of his flute.

The following day he was back at the same studio to record an album with Wes Montgomery called Movin' Along. Feldman is on piano this time with Jones and Hayes returning on bass and drums. Despite being recorded by the same engineer in the same studio, the sound is inferior to the previous session, especially on the one tune where Clay plays tenor. Several alternate takes from this session have come out on reissues and on compilations of Montgomery out-takes.

In 1962, Clay began a 15 year, off and on, relationship with the Ray Charles orchestra. He was mostly a section player on this gig with the solos often going to fellow Texas tenors David Newman of Don Wilkerson. For the hits, Charles wanted solos to exactly as on the records. Newman tired of playing the same solo on "What I Say" every night so on one occasion, when the tune came around, Clay stood up and played Newman's solo note for note. After the set, the blind bandleader confronted the two saxophonists and told them, "Don't ever try that **** again!"

At Charles' concerts the band would frequently warm up the audience with a blues number before the star made his entrance. Various bandmembers, often including Clay, would get a chorus. Many of these concerts were videotaped but the only one to make it onto LP or CD was one recorded at the Shrine in L.A. in 1964. Clay has a solo on the opening number which is usually attributed to Newman. Here's a recording of Clay soloing with the band in 1972:

In 1975, Charles produced an album featuring his band, but not himself, called My Kind of Jazz Part 3. Clay is featured on two numbers and shares the tenor spots on a couple of others with Andrew Ennis. Clay is especially strong on "3/4 of the Time." This album was reissued on the expanded edition of Genius + Soul = Jazz.

Clay married 1962 and family life would prove an island of stability in the erratic life of the jazz musician. His son recalled that his father, always a sharp dresser, didn't own a pair of tennis shoes. The son's friends would come by the house and want to know what was up with his dad whom they'd seen mowing the lawn in dress shoes.

Between stints with Charles, and after leaving the band for good, he was working day gigs in Dallas and playing odd gigs here and there in the area. He could often be found jamming with fellow Texas tenor, Marchel Ivery. A recording of Clay, Ivery, and Bob Belden jamming with Red Garland in 1977 has surfaced on YouTube but the audio and piano are of poor quality. He would also sneak off for out of town gigs playing with Newman or Red Garland at the Village Vanguard in New York or even playing some concerts with the Duke Ellington Orchestra. Even his friends often didn't know about these engagements.