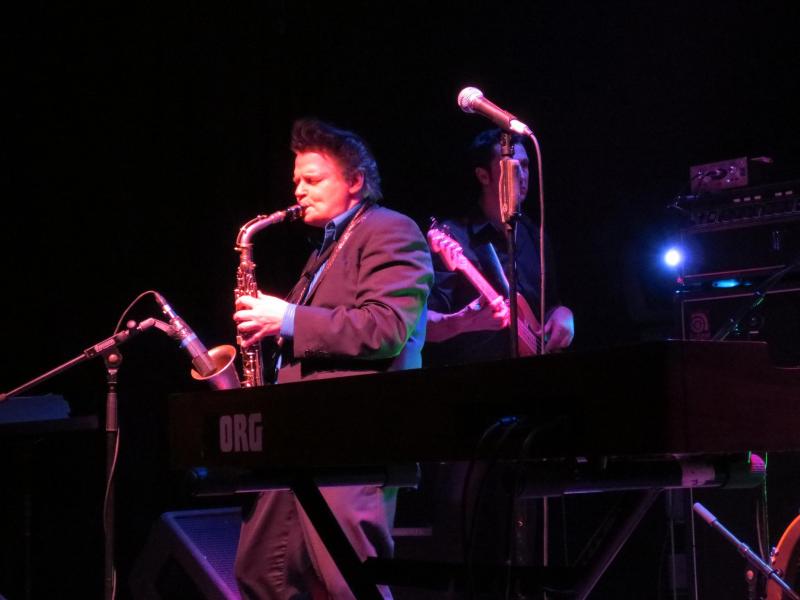 James Chance—still influential after his role as a catalyst in New York City's seventies-based No Wave movement—proved his enduring career amidst the upper creative edges is no novelty act.

Chance and his cohesive backing trio (bassist Jacques Auvergne, guitarist Pierre Fablet and drummer Alex Tual) showed they were just as suited to tasks of timbre and turmoil as their namesakes and more punkish progenitors and brought a rollicking, hundred minute set to an appreciative audience ready to swing hard and low. Chance provided an electrified outlet for the feeling. The small club, in a busy artists' colony of remodeled warehouses, heated to a boil.

The band casually took to the stage without introduction and launched into a short, intense instrumental to conjure the same screeching sax blasts that lit up No New York (Antilles, 1978), the Brian Eno-produced album which, beside Chance's original Contortions, didn't feature much beyond some interesting generational personalities. Anarchy aside, the album endured as a noteworthy New York City art movement footnote, providing Chance with ongoing marketplace mystique.

Chance presented many of the songs from Incorrigible (Ladft, 2012) to solid response. That often excellent, organ-driven effort is one of his more mainstream projects, but it was this high percentage of impressively delivered old school funk, much in homage to James Brown, which ignited the audience.

At least a quarter of the show paid a highly illuminated tribute to the "Godfather of Soul," including a probably inevitable climactic knee drop and cape effect. "King Heroin" offered murmured, cautionary asides before jumping into "Super Bad." Despite solid jams, they remained songs to evoke Brown's inescapable domain. Maybe that was the point.

"All Depends on the Amount" did not go over as well as introductory anti-Hitler jokes. "The last time I was in Germany they said I'd be arrested if I told them," Chance reported with a grin.

"Respect Yourself," another unexpected cover retro-updated for an industrial approach, was one of the set's weaker moments, but at least the message was positive. You could see many dancers repeat the chorus as they swayed.

Some of the sax solos and an unfortunate amount of enhanced guitar accents, like the scattergun chord slices on "Dislocation," were muffled somewhere between the mix and the building's shadowy elevations. The soundboard did serve up Fablet's eerie, echoing slide quite effectively.

A fine take on Gil Scott-Heron's "Home is where the Hated Is" throbbed with a strung-out desperation Chance said defined him. How autobiographical Chance's song selections are may be his business, but when he testifies with his horn, it's something to see. Despite a bitter edge, Chance's muse is a sensitive siren, a stirring, wheezy breath over your shoulder.

The band hit a powerful stride with "Do the Splurge," the type funky, abstract bebop the Rhineland population loved. Every player got to stretch a little, as revved up exit phrases showed thoughtful composition. Auvergne and Tua maintained the rumbling rhythm of an impending earthquake.

When the hardworking Chance burst into the swarm to display his own footwork on the floor, a minor frenzy ensued.

"Pull the Plug" stalled, but only for an instant before Chance's alto brought it roaring back to life. An effective, tossed salad medley of "It's a Man's, Man's,Man's World" and "I've Got It Bad and That Ain't Good" simmered in a spaced-out, mechanical drone reminiscent of vintage Manhattan east village debauchery.

Too bad Chance didn't perform "Yesterdays," a fine Billie Holiday tune and recent effort that proves his well-developed sensibility on jazz tradition. Chance turns himself inside out like the hovering ghost of trumpeter/singer Chet Baker shaking the bones of saxophonist Lester Young.

Chance, seemingly a natural performer, reflected on his earlier days and his consistent regard for the jazz standard. "Piano was my first instrument,"he said. "I started when I was seven, with nuns at the Catholic school where I went. When I was around 13 I took some lessons with an old guy in a music store who taught me some stride piano and some standards. I had a book of Oscar Peterson solos that I could play note-for-note, which I probably couldn't do now.

"At that time I didn't really understand jazz very well," Chance continued. "I didn't understand improvising. About 16, 17 I discovered free jazz and [pianists] Thelonious Monk and Duke Ellington. My big influences were Monk and [pianist] Cecil Taylor. After one year of liberal arts school, I decided I wanted to pursue music seriously. There just wasn't anything else. I knew I couldn't deal with a nine-to-five job.

"I didn't know anybody else trying to play jazz. I lived in the suburbs. I felt I hadn't seen enough of life to be able to have anything really to say as a writer, but in music it's more direct, you know," Chance continued. "I started going to this music conservatory in Milwaukee, where I'm from, and they had just started a jazz department like a year or two before. The jazz teachers there were very conservative and just could not relate to my playing. I didn't have any desire to play normal jazz piano. I didn't want to learn how to play exactly like [pianist] Bill Evans, or any of those guys, and play all the normal chord changes.

"I decided to try sax because I wouldn't be a member of the rhythm section and have to worry about playing those [types of] chords," Chance concluded. "When I started The Contortions I wasn't really playing jazz per se. I kind of lost interest in the keyboard. Later, in the eighties, I got back into playing jazz. I really didn't want to play free jazz anymore because I was bored with it. I taught myself a lot of chord changes, but totally different from when I play organ with The Contortions."

Atonal explosions got the night's biggest response, sounded the best and may have been the most natural fit. When Chance, sweating profusely, careened into purely nuanced noise, the faithful screamed along with him. As he ripped through a punked-out minute of psycho-soloing near the show's conclusion it was a price of admission moment and a well-placed, blazing finale.

After leaving the stage, Chance reappeared for an encore like some '70s specter, lost in the extreme. Gazing around the howling hall like a sprinter across the finish line, he caught his breath. "I need my horn," he mused, returning backstage. Indeed, as they locked into "I Can't Stand Myself" it looked like the need was real.

Classical composer Alban Berg, like Franz Liszt before him, experimented with atonality. Like Chance, they were not alone. Thankfully, there have always been artists and audiences outside the expanding edge of tradition. Heaving ideas against the wall of convention and making them do more than shtick can be the measure of inspiration. A gig may be a gig, but much more so if it's in the blood.

"We've played some smaller cities that I've never been to, or even heard of, but the audiences are extremely enthusiastic," said a psyched-up, 60-year-old Chance. "There's a lot of younger people, which is what I like to see because you can't base your work with just an audience my age. People my age don't often go out to concerts much even if they like you. I'm really happy to see a lot of people in their twenties and thirties. They seem to relate and they like the new material, which doesn't always happen with acts of my vintage. "

Chance was accurate in his assessment of the audience and their chronology. Maybe the wide-ranging crowd showed up because Chance is currently playing some of his most accessible music ever.

Maybe more of the jazz world is catching up to the contortions of James Chance.

Les Contortions did what they were supposed to do. They contorted well. It was a very good show.