By IAN PATTERSON
October 9, 2012
Sign in to view read count
Cammack has habitually stood to the left of Jamal: "I'm at his left hand, not that I'm watching his left hand, but I'm sensing what he's gonna do next. I'm listening directly to the piano, not just the sound system or what's happening in the air, to hear what's happening next. In that way I can stand back and relax. If you get to far away you could lose contact. The visual is important but I've got to the point where I put my ears way up in there because the music floats above us too. I not only listen to him directly but to keep a good ensemble sense I kind of throw my ears into the atmosphere above us and make sure my part is in the proper place."

Though Cammack is in no doubt that he was fired by Jamal, he is at an evident loss as to why: "I gave 110% every time, man." However, if Cammack feels any bad blood towards his former employer he's keeping it to himself. Cammack retains tremendous dignity when discussing his dismissal and he hasn't a bad word to say about Jamal. On the contrary, Cammack is still humbled by their long association: "Ahmad is not your normal, so-called jazz pianist. He is completely different to anybody. He is unbridled. He's not a traditional pianist, no, no, no. He's 82 years old. He needs to be seen by everybody before he decides to stop doing it. It's important for the music world to catch a whiff of what this man is about. I felt so privileged to be a part of it every time."

Cammack's long-standing commitment to Jamal left him little opportunity to record or tour widely with other musicians, but one project in particular has left an indelible mark on him. Director Pierre-Yves Borgeaud's moving documentary, Retour à Gorée (2007), with Senegalese singer Youssou N'Dour, follows the trail of African slaves to America and the roots of jazz that they brought with them. Cammack was pulled into the project by Muhammad, and filming took place in Senegal, Atlanta, New Orleans, New York and Luxembourg. 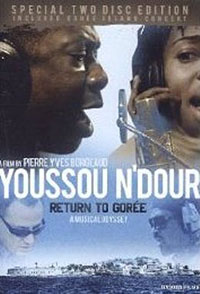 "It was an extraordinary project," says Cammack." I'll never forget it. I had no idea how great this project was going to be and I was so glad to be a part of it." Cammack first met N'Dour in New Orleans, where the bassist was recording part of the documentary with Muhammad. "That was right after Katrina had been through" explains Cammack," and things were still in pieces down there." Muhammad and Cammack were rehearsing in a rock club where there was a piano when N'Dour showed up. "We stopped and he said: 'No, don't stop.' He started singing some line over what we were playing. It was incredible how great this guy was. He improvised beautifully," recalls Cammack. "This was my first encounter with him."

Without a doubt, the most moving part of filming was on the small island of Gorée. Situated two kilometers off the coast from Dakar, Gorée—A UNESCO World Heritage Site—is home to the House of Slaves, a museum and memorial to the slaves uprooted from Africa and deported to the French, Spanish, Dutch, and Portuguese colonies of the Americas. Gorée has aroused a degree of controversy, with European academics questioning the importance of the island as a center of deportation, but regardless of the actual numbers who were held captive there and either died or were deported, historians generally agree than anything between nine and twenty million African slaves were deported between the 16h and 19th centuries. Little wonder that African and African-American historians have labeled this enforced exodus as an African holocaust.

For Cammack, visiting Gorée was a highly emotional experience. Cammack describes one experience, listening to the House of Slaves curator Boubacar Joseph Nidaye recount the history of the island: "He was explaining how they piled people in there like animals," recalls Cammack. "They shackled them in balls and chains. This gentleman—who passed away a couple of years ago—put this ball and chain in my hands just to see how heavy it was. It destroyed me, "says Cammack. "When he put that in my hands I felt the weight, the burden and the suffering of those people and I cried. I gave it back to him and I walked away in tears. I had to get away from everybody. The magnitude of the devastation of the African people back then was just massive, and debilitating to our African societies. It left an impression on me."

The filming on Gorée included two concerts, with a band including N'Dour, Muhammad, Cammack, pianist Moncef Genoud harmonica player Gregoire Maret, guitarist Wolfgang Muthspiel, singer Pyeng Threadgill and trumpeter Ernie Hammes: "The two concerts were really fantastic," says Cammack. "What a playing environment! You know, all those years I've been playing with Ahmad, and playing with him is a little restrictive 'cause you have to really follow him. Being pulled out of that environment and placed into another where I was allowed an extraordinary amount of freedom of speech, so to speak, was so much fun."

It's a little ironic, that Cammack should discover a newfound musical freedom at a place where so many were enslaved. "I've never played like that in my life, man," says Cammack. "Idris and I together? It was like wildfire. I was grinning from ear to ear." And 15 years after first playing with Muhammad, Cammack had new insight into his rhythm partner: "We were so very free, but so very sure of what we were playing. I really saw the essence of what Idris is all about in that environment with Youssou." Cammack was mightily impressed with N'Dour, someone he freely admits to knowing next to nothing about prior to this project: "Youssou N'Dour is a monster singer," raves Cammack." His ability to articulate his music was so powerful he would just yank the band in his direction. Being a part of this documentary was very influential for me," acknowledges Cammack.

And life goes on. Cammack is developing a bunch of musical partnerships in New York, some that date back a few years and others that are new. One such musician that Cammack enthuses about is pianist Joe Alterman, with whom Cammack recorded on the pianist's debut as leader, Give Me The Simple Life (Miles High Records, 2012): "Joe's a fantastic pianist from Atlanta. There are a lot of killing harmonic monsters coming out of the woodwork, kids of 15, not to mention all the extraordinary young guys that have already hit the scene like [pianist] Christian Sands but Joe plays different from that," Cammack says. "Joe has an old style, old-style harmony, and that style is fueled by a whole lot of heart and soul."

Heart and soul is what Cammack's playing is all about, too, though he'll be pouring both in new directions and new projects. There's more to come from Cammack as a leader and there's an exciting recording in the works with violinist Zach Brock and veteran pianist Phil Markowitz, due for release in 2013. In spite of his high- profile gig with Jamal, there's still a tremendous modesty about Cammack: "Man, I'm not a star. I would love to have the star ability and genius of some of these guys like Christian McBride and John Patitucci but I can only do what I do and I try to do the best I can. I'm still trying to grow as a musician," he asserts. No matter where Cammack pitches up, he'll give—as he gave to Mr. Jamal for 29 years—110%. .

James Cammack, Both Sides of the Coin (Self Produced, 2012)

Joe Alterman, Give Me The Simple Life (Miles High Records, 2012)

All Other Photos: Courtesy of James Cammack