James Blood Ulmer and the Thing at Bochum Art Museum 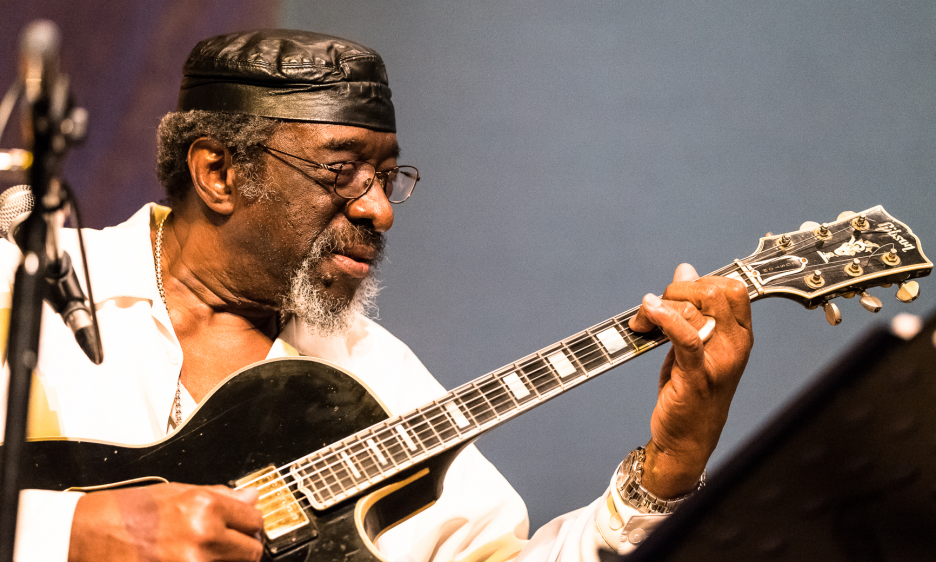 Improvisational master guitarist Ulmer has played a number of varying, high quality shows around Germany in recent years, solidifying his reputation as a wide-ranging entertainer. Tonight's set was one of his best.

The gods of music sometimes hear things differently than the rest of us, but tonight everyone was on the same warped wavelength as an initial jam, concluding with snatches of "Baby Talk," ran for almost an hour. Gustafsson and Flaten looked so intense it appeared they'd burst. Ulmer sat stoic and amused, leading the cosmic charge; his reptilian footwear subtly working an effects pedal. He brought his sheet music along, but the thick book remained untouched on the stand. They raged for twenty minutes before Ulmer brought the anti-chord chaos back down in tempo, and subdued application of the bass bow slowed to measure the hall's collective pulse.

Soon, an intensely gesturing Gustafsson seared the ceiling as Ulmer's scattered string work simmered to a boil. Proving method to the madness, numerous well timed breaks or segues demonstrated how well the players anticipate and react to each other. The band's wild explorations found coordinated, if mutated, harmony. It would be interesting to peruse a dissertation on the audience's faces. Remarkably, even commendably, many folks in the older, median-aged assembly nodded their heads as if they were listening to mainstream pop.

The set achieved near greatness at around the fifty-minute mark, and during a cadence of only guitar and drums it was sublime. The last piece of identifiable composition was "Interview," but songwriting definitions didn't matter. By then, everybody's ears and expectations had been properly shredded. A noticeable conversion took place for a beautiful woman in the front row, who seemed to scoff initially and was overheard asking "Is the instrument or the musician the master here?" It was a good but unanswerable query, and whatever conclusion she derived, she cheered louder than anybody when the musicians took their bows after around an hour and a half of truly original artistry.

Extended clapping and hurrahs for an encore came as the entire audience stood in approval for an extended period. The effort was rewarded by another brief journey to the edge, later deemed "all kinds of crazy stuff" by Nilseen-Love backstage. The concert might not have pleased more conservative jazz listeners, but the raucous routine went over quite well in Bochum. Such performances are rare to hear.

The show was part of the revitalized RuhrJazz program, thanks to founder Ulli Blobel.

Music abstractions can be a make or break situation for any audience, depending on intangible chemistry. This afternoon's art museum location was nearly perfect, big enough to accommodate a couple hundred fans while intimate enough for everyone to connect with both the band and the bombast. From the resulting cheers, it seems that connection was unanimously established. This highly functional unit will probably never be an arena act, but that doesn't mean their sound doesn't blow away many other groups that are. Today they were something to marvel at, a fantastic foursome indeed.