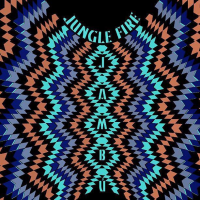 Ever since they released their debut, Tropicoso, Jungle Fire has left me hungry for more of their sabroso Latin Funk. It was the Funkish best album of 2014, and now one of my go-to favorite records.

Finally, they've released the follow up on Nacional Records...and it's just as good as the first one! Jambú continues with caliente Latin rhythms, and Jungle Fire also shows off scorching guitar playing, and blistering brass throughout—in addition to their incendiary percussion storm.

The second album from Los Angeles Latin Funk phenom, Jungle Fire, is called Jambú because while on tour in Brazil the guys got into Cachaça de Jambú, an infusion of Brazilian white rum & an Amazonian herb that makes the mouth numb & tingly. And, of course, the record jams!

The record starts out with a tribute to their Afro-Funk influences with a Latin Funk riff on the "Soul Makossa" bass line on "LA Kossa." Just like they did their own thing with Fela Kuti's "Let's Start" on "Comencemos" from Tropicoso, they repeat the feat with a nod to Manu Dibango's classic—Los Angeles global Funk style.

There are more guitar and effects on this album. "Jambú," for example, is a pretty far out monster jam. Guitarist, Patrick Bailey, makes his own guitar pedals that create the psychedelic sounds on Jambú. When you're listening to the album as some wild sounds follow the percussion storm, and can't tell for sure what makes that sound...it's Bailey's creative use of guitar effects.

People always dig the Cumbia groove; it's an irresistible rhythm. I love the way Jungle Fire puts its own stamp on it with "Cumbia de Sal." It's the only cover song on Jambú, being a version of an obscure Afro-Colombian tune from the 1970s by Cumbias en Moog. It sounds as if Jungle Fire were listening to Frente Cumbiero & the new wave of Cumbia bands, and got inspired. I bet it's fun to play live!

"Callejero" is another super jam with phenomenal guitar work, teriffic timbales, and bold brass. It reminds me of WAR, the original L.A. Latin Funk lowriders that blended Afro-Latin grooves, Jazz, and 70s R&B. I bet this one gets the dance floors movin'!

"Efori" sounds a little more African Funk to my ears than the old-school Spanish Harlem type Funk Jungle Fire is so great at modernizing. What I love about them is how they mix African & Latin percussion styles with modern Funk, Rock, Jazz, and their own special thing.

Something else I love about Jungle Fire is that they put the percussion forward, both in the mix & live on stage. It really brings forth a high-energy vibe that gets people dancing. And, it's distinct from the way most bands put the guitars & singers forward.

Jungle Fire pre-released a 45 for "N.U.S.A.U." on Colemine Records. It stands for "None of Us is as Strong as All of Us"—a saying the late, great DJ Dusk used to announce at his DJ gigs. "N.U.S.A.U." brings the heat! It's a high-energy jam propelled by the horn section, and Jungle Fire's always combustible percussion ensemble.

"Bele Bele" is a similarly potent song! It's another timbales led tune with cool guitar effects, and a rolling wave of percussion.

Jungle Fire gets a little weirder on "Lamento Momposina." It has a slightly melancholy Ethiopian Jazz/Funk feel to it, like a Budos Band song. And yet, it's still all Jungle Fire—percussive and full of powerful horn lines.

"Mofongo" closes out Jambú in high style. Playful horns dance alongside a tremendous timbales jam. The dopest drum & bass groove keeps it going as the rest of the percussion players give it that Jungle Fire Latin Funk flavor I love so much. More trippy guitar playing makes its mark to prove Jungle Fire is a force all its own—updating old-school, 1970s Latin Funk for the 2000s.