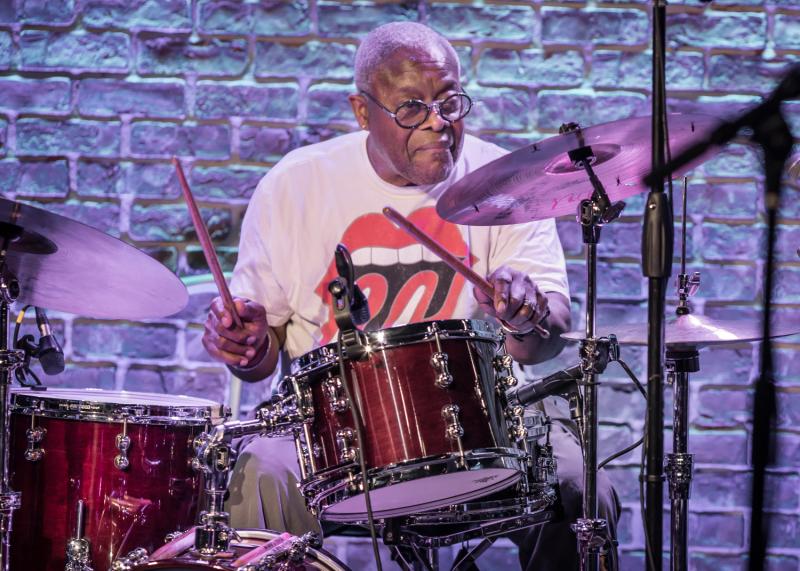 When guitarist Duane Allman was looking to start a band in 1969, the first musician he hired was drummer Jai Johanny Johanson. Just 24 years old at the time, Johanson, becoming known from Memphis to Muscle Shoals simply as Jaimoe, was already a veteran of the R&B circuit, having toured with Sam & Dave and Otis Redding. Crossing paths in the evolving music scene, Duane and Jaimoe made a musical connection based on admiration for each other's playing. Additional musicians were found—bassist Berry Oakley; a second drummer, Butch Trucks; a second guitarist, Dickey Betts; and, finally, Gregg Allman, Duane's brother, on vocals and Hammond organ. Thus was born the Allman Brothers Band.

With the shocking death of Butch Trucks early this year and the recent passing of Gregg Allman, only Jaimoe and Dickey Betts remain of the original sextet Duane assembled. While the latter-day Allman Brothers Band was still touring, Jaimoe started a side gig in 2012 to indulge his jazzier self. Dubbed Jaimoe's Jasssz Band, he teamed with veteran blues guitarist and singer, Jr Mack and added a horn section to take the Allmans' music and other blues standards in new directions. There have been personnel changes over the years, but the current lineup has now settled into a monthly residency at New York's Iridium Jazz Club, a suitably venerable venue for a musician of Jaimoe's stature.

Soft-spoken and circumspect, Jaimoe maintained a lower profile than the other Brothers during the band's heyday. He never came across as anyone's idea of a front man, yet his Jasssz band is a favorite at festivals across the country in addition to their regular Iridium shows. The Allman Brothers were always a guitar-driven band, and playing leads created by Duane and Dickey and, later, interpreted by Warren Haynes and Derek Trucks is an unenviable task for any guitarist. One of the few players up to the challenge is Mack, a Blues Hall of Famer who often joined the Brothers during their Beacon Theater runs. Surrounded by so much guitar firepower on the Beacon stage, it was difficult to get a sense of just how good Mack really is, but in the small-club atmosphere of Iridium, his enormous talents truly shine. His guitar work and tone are impeccable, his voice strong and bluesy. Hanging out backstage before a recent show, it became clear that Mack is also the musical director, putting together the evening's set list and getting his fellow musicians up for the show.

The band, however, is far more than a guitar-led cover band. The trio of brass and woodwind players features Kris Jensen on alto and baritone sax; Paul Lieberman on tenor sax, flute and piccolo; and Reggie Pittman on trumpet. When not blowing horn, each of them fills in with a range of percussion instruments to add accents to an already rich sound. Brian Surette has taken over duties on Hammond organ and electric piano, with Dave Stoltz on bass.

The Allman Brothers were among the first rock bands to embrace extended improvisation—"In Memory of Elizabeth Reed" and "Whipping Post" were among the early jazzified standouts—and, while the band's roots were in blues rather than jazz, Duane and Dickey were heavily influenced by the sonic palettes of John Coltrane and Miles Davis. While the Allman catalog still forms the basis of Jaimoe's shows, things have moved in a decidedly jazzy and R&B direction, with sax supplanting guitar and new compositions that draw on Coltrane and Davis. A recent show opened with an extended instrumental that allowed each player to step out and solo in true jazz tradition, and later in the evening the band performed an original composition by Jensen.

Familiar favorites such as "Blue Sky" now soar into jazz fusion, and the collective improvisation on "Mountain Jam" is right out of the Charles Mingus playbook. There is plenty of blues as well, from Albert King's "Born Under a Bad Sign" to "Loan Me a Dime"—the Boz Scaggs classic on which Duane Allman originally played. Most sets end, appropriately, with a drum solo from Jaimoe, a master class in musical taste and efficiency.

It's good to see an understated talent like Jaimoe with a steady gig that is building momentum. We can't call Jaimoe's Jasssz Band the hardest working band in New York City because they make it look so easy, but they are clearly one of the finest regularly appearing acts in town in one of the city's best rooms for sound quality and friendly vibe.