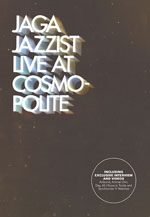 With 30 dates already performed in 2010 since the release of One-Armed Bandit (Ninja Tune, 2010)—its first studio record in five years—Jaga Jazzist is keeping the momentum of its comeback rolling, with a variety of free download tracks and a vinyl-only remix EP, Bananfluer Overalt (Ninja Tune, 2010). While the current nonet incarnation of this true Norwegian curiosity—a large, multi-instrumentalist ensemble featuring some of the country's most significant young musicians, performing complex compositions that would normally appeal to a very niche audience, but with a hard rock energy (and volume) and intelligent approach to marketing itself that's resulted in a large, cross-demographic audience and near-pop star devotion—is recording all of its current shows, with an eye to a live album sometime in 2011, Live at Cosmopolite captures a somewhat different version of the group at Oslo's Cosmopolite in April 2005, touring in support of What We Must (Ninja Tune, 2005), its final release before taking nearly a five-year hiatus.

Shot with a number of cameras, and mixed in both stereo and 5.1 surround, Live at Cosmopolite finds Jaga's core group intact—siblings Martin (drums, samples), Lars (guitars, reeds, keyboards) and Line (tuba, percussion, vocals) Honrtveth, as well as trumpeter/multi-instrumentalist Mathias Eick, trombonist Erik Johannsessen, multi-instrumentalist Andreas Mjøs and bassist Even Ormestad—fleshed out here, from an octet to an 11-piece with the addition of guest trombonist Lars Wabø. Performing a dozen tunes from across its discography—dating as far back as "Animal Chin," the opening track to A Livingroom Hush (Ninja Tune, 2001), covering half of The Stix (Ninja Tune, 2002) and almost all of What We Must (including opening the concert with its first three tunes—the thundering, anthemic "All I Know is Tonight," tremolo guitar-driven "Stardust Hotel" and a softer, more lyrical version of "For All You Happy People"), the opportunity to actually see Jaga Jazzist in action only makes its tremendous popularity both more surprising and understandable. It also makes its success all the more encouraging, at a time when other groups are struggling to stay afloat.

After all, at a time when the larger pop music machine is spoon-feeding music to the masses, Jaga Jazzist performs lengthy, episodic music—most of it written by Lars Horntveth—with shifting tempos and irregular meters, filled with harmonic and contrapuntal complexities that defy the simplistic appeal of so much contemporary pop. Jaga isn't a pop band (not that there's anything wrong with pop music), and yet its fans—largely young, always excited and dancing its way through music that blends tough horn charts with a mix of vintage keyboard sounds, vibraphones, steel guitars and Martin Horntveth's thundering yet fluid pulses (a curious combination of John Bonham, Tony Williams and Bill Bruford)—looks and acts more like a pop audience. And that's a very good thing.

Jaga Jazzist is, at its core, a jazz group, albeit one that's more focused on detailed through-composition, with soloing kept to a relative minimum—though, in performance, Lars Horntveth loosens up the strings a little and allows some of Jaga's most compelling soloists (in particular Eick, who delivers a number of short but very sweet solo spots, and Horntveth himself, whose soprano solo on "Suomi Finland is surprisingly visceral) a little more space than he affords on record. But it's a jazz group with a youthful vigor and edge; an intrepid explorer of many musical nexus points, sounding like nothing but Jaga Jazzist.

Despite playing music that demands constant concentration from its players, Jaga Jazzist also performs like a young band, with plenty of movement onstage, even as some of its members are switching instruments so often that it's impossible to keep up. With a light show that combines rich colors, energetic strobe lighting and copious amounts of smoke to create moody settings as the group makes its way through an expanse of dynamic pacing—most Norwegian groups, even in jazz, tour with their own sound engineer, and many also tour with their own lighting person—Jaga Jazzist's music may be more, but it feels like a rock show; one reason, perhaps, why the group has managed the crossover into an audience that might normally not touch a group like this with a ten-foot pole.

And yet, if all this sounds like gimmickry, rest assured that it's anything but. What Jaga Jazzist has managed to accomplish is exactly what so many are claiming needs to be done to keep jazz alive: find a way to appeal to a young demographic, and bring it into the music. If Jaga's roots in everything from post-minimalism to prog and post-rock make it seem distanced from the staid jazz tradition, its equal interest in the music of the larger ensemble work of Gil Evans and Charles Mingus simply means that, as a group of relatively young players (some of them are now beginning to stretch into the far side of their thirties, though you'd never know it, other than a few receding hairlines and slightly expanding waistlines), Jaja Jazzist is finding ways to incorporate its own voracious musical appetites into music that's profound yet exciting; multilayered in its complexity yet never less than thoroughly approachable.

If pianist Brad Mehldau can cover Radiohead, Soundgarden and Nick Drake, why can't Jaga incorporate interest in music ranging from Frank Zappa, Gentle Giant and Tortoise into a kind of youthful big band music for the new millennium? What Live at Cosmopolite proves, unequivocally, is that it's possible to make music with broad appeal but without compromise, and deliver it in an exhilarating fashion that emulates its studio arrangements without exactly replicating them; instead, reshaping them for whatever instrumentation is on hand (in this case, with Ketil Vestrum Einaresen performing almost entirely on flutes, a much different complexion, say, than the more brass and keys-heavy incarnation that played at the 2010 Kongsberg Jazz Festival).

In addition to the 85-minute concert, Live at Cosmopolite also includes fifteen minutes of interview footage with the various members of Jaga Jazzist (in Norwegian, but with optional English subtitles). As ever, Martin Horntveth acts as the group's primary spokesperson, discussing the various challenges of starting and maintaining a group, though it's Lars who describes Jaga as an "idealistic family band" where everyone feels as though they're "fighting for a cause, a common higher goal." What becomes clear, throughout the interview and the concert, is that the best way to describe the group's music is not through the various inevitable comparisons. "It is a compliment that people recognize us," says Lars, "'That must be Jaga.' Because of the sound. The melodic qualities. Even if you hear something 10 years old, you hear that it's Jaga."

The DVD also includes five music videos, from 2001's "Airborne" to 2006's "Synchronize Yr Watches," making Live at Cosmopolite a complete video document of Jaga Jazzist, up to its five-year break. With the critical and popular acclaim for One-Armed Bandit (many calling it Jaga's best disc to date), a touring schedule that's surprisingly ambitious for a group this size and filled with so many players busy with other projects, and recording in the works for a new live album, the story of Jaga Jazzist is far from over. But for a couple-hour synopsis of how Jaga Jazzist got to where it is now, Live at Cosmopolite is as good as it gets: well recorded, well played and beautifully presented.