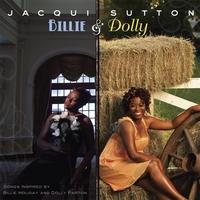 Jacqui Sutton and The Frontier Orchestra

Heaven knows that contemporary jazz vocals could use a shot of sense-of-humor. The scene hosts a legion of earnest singers paying tribute to their idols, firebrands intent on extending the already stretched-taut realms of scat and vocalese, and soccer moms and dads fulfilling a vanity ambition—all so serious. Sense of humor is in order, but not just any sense of humor will do; it has to be a smart sense of humor, not cheeky or rude, only clever and coy, wafting sophistication and panache.

Appearing just in time is one Jacqui Sutton, late of Houston, Texas by way of Orlando, Rochester, San Francisco, Portland and New York, claiming that ..."Turning 50 and starting a garage band is not the usual vocalist's narrative. But that's what happened with me. It's not just any band, but an orchestra: what I call the Frontier Jazz Orchestra: a stylistic mash-up of jazz, bluegrass and orchestral/chamber music." That is a very promising beginning.

Sutton extends this genre mash-up into the core of her release Billie & Dolly, a tribute to singers Billie Holiday and Dolly Parton. Now, what was that about "earnest singers paying tribute to their idols?" Never mind and just go with it, the two singers make such strange musical bedfellows that their pairing has to meet the fun and smart definition. And in a creative way, what Sutton is trying to do makes perfect sense. She is trying to capture what she terms "frontier jazz"—music as it spreads West, incorporating Mississippi and Aaron Copland, Texas and Virgil Thompson, Louisiana and William Grant Still.

Sutton employs a middle-sized band, an octet, as her Frontier Orchestra, nominally lead by multi-instrumentalist/arranger Henry Darragh, who also provides piano and trombone support in addition to his arranging duties. Darragh made his own splash with his uniformly fine Tell Her For Me (Self Produced, 2010). The presence of cellist Max Dyer, guitarist/six-string banjo player Paul Douglas Chester and flautist Aralee Dorough lend the orchestra its frontier flavor. Sutton favors copious amounts of Chester's banjo, which he plays and solos like a guitar. The effect is digital sepia, old fashioned with a modern edge, which sharpens with Darragh playing the Fender Rhodes (hear the effervescent "Risk").

The most overt homages paid to the two singers are Sutton's Tombstone setting of "God Bless the Child" (sporting a Darragh-composed brass chorale) and a definitive reading of Parton's "Endless Stream of Tears" accented by some virtuoso banjo, fiddle and accordion playing. Sutton tends to all corners of her 40 acres of music. "Keeper of Your Love/Sweep Me Off My Feet" could have been an out take from the musical Oklahoma! (1943) and shows off Sutton's stage experience supported by duet partner Lyndon Hughes.

"The Moon is Made of Gold" (composed by Rickie Lee Jones' father, Richard Loris Jones) is one of the several disc high points, featuring bassist Anthony Sapp and trumpeter Dennis Dotson. Sapp's solo introduction is solid and commanding; Dodson's sounds like Louis Armstrong sparring with Darragh's Jack Teagarden trombone, explosive and inventive, except with softened edges, like Armstrong and Teagarden shared just enough cough syrup before playing. Chester fully quotes "The Sunny Side of the Street" in his banjo solo, before Sutton finishes off the torch with command.

Sutton and her orchestra come from all directions at once. "The Mississippi Song" provides more Broadway by way of El Paso. "My Man's Gone Now" is the Gershwins in the warm Gulf climes. "Those Memories of You" is Bill Monroe by way of Clifton Chenier. Sutton's "Frontier" sound achieves its full maturity in Parton's "Endless Stream of Tears." This is music that has no genre, belonging to all. It is uniquely American and could not have been created anywhere else.

The music on Billie & Dolly arrives fully formed and realized, sounding like the destination Cassandra Wilson has been evolving toward for the past 20 years: a bona fide, organic, earthy, fecund sound tempered with grace and good taste. Sutton's confidence and certainty are almost palpable in every selection from this beautiful and unusual recital. Had Bessie Smith met Bob Wills and recorded with him and the Texas Playboys one dusty late Texas autumn day, the results might have sounded a lot like Jacqui Sutton and her Frontier Orchestra.

Tracks: God Bless the Child; Black Hole; Lazy Afternoon; Keeper of Your Love; Those Memories of You; My Man's Gone Now; Risk; The Moon is Made of Gold; Mississippi Song; Sleepin' Bee; Endless Stream of Tears.