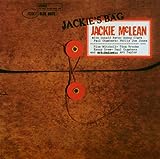 The material on Jackie's Bag comes from two different sessions, each with a different supporting cast (Jan. ‘59, with Donald Byrd on trumpet, Sonny Clark on piano, Paul Chambers on bass, and Philly Joe Jones on drums; and Sept. ‘60, with Blue Mitchell on trumpet, Tina Brooks on tenor, Kenny Drew on piano, Chambers again, and Art Taylor on drums). Much of the fun of listening to the album comes from contrasting the approaches of the two bands. The first session’s playing is stronger, but the second’s compositions and arrangements stand out above the rest.

The masterful Jones distinguishes "Fidel," a ritzy, catchy, mid-tempo McLean piece from the ‘59 session, through his commanding, yet responsive drumming. During Byrd's and McLean's solos, he plays hypnotic unison hits with Clark; unleashes flurries of clicks and clacks from the rims of his kit; and, at one surprising moment, prefigures a phrase of McLean's and mirrors it exactly. The '60 session reaches an emotional peak with McLean's "A Ballad for Doll," an urgent melody saved from its own melodrama by a delicate arrangement of horns beckoning the listener out of the head, whispering and swaying behind the lone soloist, Drew. A similarly affecting orchestration introduces the McLean cooker "Appointment in Ghana." Throughout this piece, the obscure tenor Tina Brooks demonstrates a pinched tone reminiscent of George Coleman and a stiff, yet captivating sense of rhythm.

Jackie McLean has recorded three essential records for Blue Note: Let Freedom Ring, One Step Beyond, and Destination Out. It is not surprising, given that the sessions on Jackie's Bag include the very first he led for the label, that this record is not among them. But the solid hard bop on Jackie's Bag is definitely worth a listen.